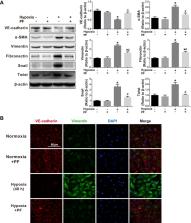 Endothelial cells dysfunction is one of the hallmark pathogenic features of pulmonary arterial hypertension (PAH). Paeoniflorin (PF) is a monoterpene glycoside with endothelial protection, vasodilation, antifibrotic, anti–inflammatory and antioxidative properties. However, the effects of PF on PAH remain unknown.

Here, we investigated the efficacy of PF in the SU5416/hypoxia (SuHx) rat model of PAH. Human pulmonary arterial endothelial cells (HPAECs) were exposed to 1% O 2 with or without PF treatment.

Lawrence Reynolds,  S. N. Danilov,  M. Kathleen Holmes … (2012)
Pulmonary arterial hypertension (PAH) remains a fatal disease despite modern pharmacotherapy. Mutations in the gene for bone morphogenetic protein receptor type II (BMPR2) lead to reduced BMPR2 expression, which is causally linked to PAH. BMPR2 is predominantly expressed on pulmonary endothelium and has complex interactions with transforming growth factor (TGF)-β signalling mechanisms. Our objectives were to assess the effect on PAH of upregulating BMPR2 by targeted adenoviral BMPR2 gene delivery to the pulmonary vascular endothelium. We used two established rat models of PAH: chronic hypoxia and monocrotaline (MCT). In both hypertensive models, those receiving BMPR2 had less right ventricular hypertrophy, less pulmonary vascular resistance, improved cardiac function and reduced vascular remodelling. In the MCT model, there was an increase in TGF-β, which was prevented by BMPR2 treatment. In vitro, TGF-β1-induced endothelial-mesenchymal transition (EndMT) in human pulmonary microvascular endothelial cells, which was associated with reduced BMPR2 expression. EndMT was partially ameliorated by stimulating BMPR2 signalling with appropriate ligands even in the ongoing presence of TGF-β1. Collectively, these results indicate therapeutic potential for upregulation of the BMPR2 axis in PAH, which may be, in part, mediated by countering the remodelling effects of TGF-β.

Comparative efficacy, acceptability, and tolerability of lisdexamfetamine in child and adolescent ADHD: a meta-analysis of randomized, controlled trials.