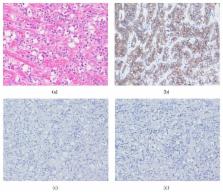 Hyalinizing clear cell carcinoma (HCCC), so-called clear cell carcinoma, not otherwise specified (CCC (NOS)), of the salivary glands is a rare and low-grade malignant tumor. We report a case of HCCC so-called CCC (NOS) (referred to as HCCC) of the minor salivary gland of the buccal mucosa. A 52-year-old woman had presented with a gradually growing and indolent mass in the right buccal mucosa for about two years. The first biopsy histopathologically suggested the possibility of malignancy derived from the minor salivary glands. A month later, she visited our hospital. The tumor measured approximately 1.5 cm in diameter and was elastic hard, smooth, and well movable. Image examinations demonstrated internal homogeneity of the lesion, which had a smooth margin, in the right buccal mucosa. Complete tumor resection followed by covering with a polyglycolic acid sheet and fibrin glue spray was performed without surgical flap reconstruction. Histopathological findings revealed proliferating tumor cells with clear cytoplasm surrounded by hyalinizing stroma in the submucosal minor salivary glands. Immunohistochemical stains revealed these tumor cells to be positive for epithelial cell markers but negative for myoepithelial ones. These findings confirmed the diagnosis of HCCC. Good wound healing and no evidence of local recurrence and metastasis have been shown since surgery.

EWSR1-ATF1 fusion is a novel and consistent finding in hyalinizing clear-cell carcinoma of salivary gland.

Grace Bradley,  Raja R. Seethala,  Nora Katabi … (2011)
Hyalinizing clear-cell carcinoma (HCCC) is a rare, low-grade salivary gland tumor with distinctive clear-cell morphology and pattern of hyalinization as well as focal mucinous differentiation. However, histological overlap exists with other salivary gland tumors, such as epithelial-myoepithelial carcinoma (EMCa), salivary myoepithelial carcinoma, and mucoepidermoid carcinoma (MEC). The potential relationship between HCCC and its morphological mimics has not been yet investigated at the genetic level. In this study, we conducted a molecular analysis for the presence of rearrangements in MAML2, commonly seen in MECs, and EWSR1, involved in "soft tissue myoepithelial tumors" (SMET) by fusion with POU5F1, PBX1, or ZNF444. Fluorescence in situ hybridization (FISH) was performed on 23 HCCC cases for abnormalities in MAML2, EWSR1, FUS, POU5F1, PBX1, and ZNF444. FISH for MAML2 was negative in all cases (0 of 14), including those with mucinous differentiation (0 of 7). An EWSR1 rearrangement was identified in 18 of 22 HCCCs (82%), while no break-apart signals were seen in FUS, POU5F1, PBX1, or ZNF444. 3'RACE on an EWSR1 rearranged HCCC identified an EWSR1-ATF1 fusion, which was confirmed by RT-PCR. ATF1 involvement was further confirmed by FISH analysis in 13 of 14 EWSR1-rearranged HCCC cases (93%). In contrast, all control cases tested, including among others 5 EMCa and 3 MEC with clear cells, were negative for EWSR1 and ATF1 rearrangements. The presence of EWSR1-ATF1 fusion in most HCCCs reliably separates these tumors from its histological mimics. The distinction from MEC is particularly important, as conventional MEC grading schemes overgrade these indolent HCCCs, potentially impacting on treatment. Copyright © 2011 Wiley-Liss, Inc.

Relative frequency of intra-oral minor salivary gland tumors: a study of 380 cases from northern California and comparison to reports from other parts of the world.

Marshall Carpenter,  Amos Buchner,  W Merrell (2007)
The relative frequency of individual intra-oral minor salivary gland tumors (IMSGT) is not well documented in the literature. The aim of this study was to determine the relative frequency and distribution of IMSGT in an oral pathology biopsy service and to compare the data with similar studies from different parts of the world. Files from the Pacific Oral and Maxillofacial Pathology Laboratory of the University of the Pacific, San Francisco, California served as a source of material for this study. Files were systematically searched for all cases of IMSGT during a 20-year period. Tumors were classified according to the 2005 WHO classification of salivary gland tumors. IMSGT were identified in 380 (0.4%) cases of 92 860 accessed. This is the largest series of IMSGT from one source reported in recent years. Of the 380 tumors, 224 (59%) were benign and 156 (41%) were malignant. Of the benign tumors, pleomorphic adenoma (PA) was the most common (39.2%), followed by cystadenoma (6.3%), canalicular adenoma (6.1%), ductal papillomas (4.4%), basal cell adenoma (1.6%), and myoepithelioma (1.3%). Of the malignant tumors, mucoepidermoid carcinoma was the most common (21.8%), followed by polymorphous low-grade adenocarcinoma (7.1%), adenoid cystic carcinoma (6.3%), adenocarcinoma, not otherwise specified (NOS; 2.1%), acinic cell carcinoma (1.6%), clear cell carcinoma, NOS (1.0%), and carcinoma ex PA (0.5%). Studies related to the relative frequency of individual IMSGTs from different parts of the world are difficult to compare because many studies are outdated, the number of cases is small, the list of tumors is limited, and new entities are not included. To determine the true relative frequency, more studies should be conducted, on a large number of cases from one source, by experienced pathologists in the field of salivary gland tumors.