Factors associated with attrition, mortality, and loss to follow up after antiretroviral therapy initiation: data from an HIV cohort study in India 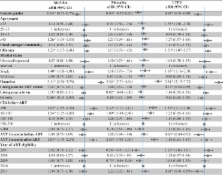 Studies from sub-Saharan Africa have shown high incidence of attrition due to mortality or loss to follow-up (LTFU) after initiating antiretroviral therapy (ART). India is the third largest country in the world in terms of HIV infected people, but predictors of attrition after ART initiation are not well known.

We describe factors associated with attrition, mortality, and LTFU in 3,159 HIV infected patients who initiated ART between 1 January 2007 and 4 November 2011 in an HIV cohort study in India. The study included 6,852 person-years with a mean follow-up of 2.17 years.

In this cohort study, the attrition was similar to the one found in sub-Saharan Africa. Earlier initiation of ART, improving the diagnosis of tuberculosis before initiating ART, and giving more support to those patients at higher risk of attrition could potentially reduce the mortality and LTFU after ART initiation.

Matthew Fox,  Sydney Rosen (2010)
Objectives To estimate the proportion of all-cause adult patient attrition from antiretroviral therapy (ART) programs in service delivery settings in sub-Saharan Africa through 36 months on treatment. Methods We identified cohorts within Ovid Medline, ISI Web of Knowledge, Cochrane Database of Systematic Reviews and four conference abstract archives. We summarized retention rates from studies describing observational cohorts from sub-Saharan Africa reporting on adult HIV 1- infected patients initiating first-line three-drug ART. We estimated all-cause attrition rates for 6, 12, 18, 24, or 36 months after ART initiation including patients who died or were lost to follow-up (as defined by the author), but excluding transferred patients. Results We analysed 33 sources describing 39 cohorts and 226 307 patients. Patients were more likely to be female (median 65%) and had a median age at initiation of 37 (range 34–40). Median starting CD4 count was 109 cells/mm3. Loss to follow-up was the most common cause of attrition (59%), followed by death (41%). Median attrition at 12, 24 and 36 months was 22.6% (range 7%–45%), 25% (range 11%–32%) and 29.5% (range 13%–36.1%) respectively. After pooling data in a random-effects meta-analysis, retention declined from 86.1% at 6 months to 80.2% at 12 months, 76.8% at 24 months and 72.3% at 36 months. Adjusting for variable follow-up time in a sensitivity analysis, 24 month retention was 70.0% (range: 66.7%–73.3%), while 36 month retention was 64.6% (range: 57.5%–72.1%). Conclusions Our findings document the difficulties in retaining patients in care for lifelong treatment, and the progress being made in raising overall retention rates.

Martin Brinkhof,  Mar Pujades-Rodríguez,  Matthias Egger (2009)
Background The retention of patients in antiretroviral therapy (ART) programmes is an important issue in resource-limited settings. Loss to follow up can be substantial, but it is unclear what the outcomes are in patients who are lost to programmes. Methods and Findings We searched the PubMed, EMBASE, Latin American and Caribbean Health Sciences Literature (LILACS), Indian Medlars Centre (IndMed) and African Index Medicus (AIM) databases and the abstracts of three conferences for studies that traced patients lost to follow up to ascertain their vital status. Main outcomes were the proportion of patients traced, the proportion found to be alive and the proportion that had died. Where available, we also examined the reasons why some patients could not be traced, why patients found to be alive did not return to the clinic, and the causes of death. We combined mortality data from several studies using random-effects meta-analysis. Seventeen studies were eligible. All were from sub-Saharan Africa, except one study from India, and none were conducted in children. A total of 6420 patients (range 44 to 1343 patients) were included. Patients were traced using telephone calls, home visits and through social networks. Overall the vital status of 4021 patients could be ascertained (63%, range across studies: 45% to 86%); 1602 patients had died. The combined mortality was 40% (95% confidence interval 33%–48%), with substantial heterogeneity between studies (P<0.0001). Mortality in African programmes ranged from 12% to 87% of patients lost to follow-up. Mortality was inversely associated with the rate of loss to follow up in the programme: it declined from around 60% to 20% as the percentage of patients lost to the programme increased from 5% to 50%. Among patients not found, telephone numbers and addresses were frequently incorrect or missing. Common reasons for not returning to the clinic were transfer to another programme, financial problems and improving or deteriorating health. Causes of death were available for 47 deaths: 29 (62%) died of an AIDS defining illness. Conclusions In ART programmes in resource-limited settings a substantial minority of adults lost to follow up cannot be traced, and among those traced 20% to 60% had died. Our findings have implications both for patient care and the monitoring and evaluation of programmes.

HIV Treatment as Prevention: Systematic Comparison of Mathematical Models of the Potential Impact of Antiretroviral Therapy on HIV Incidence in South Africa