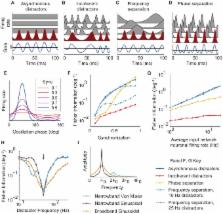 The ‘communication through coherence’ (CTC) hypothesis proposes that selective communication among neural networks is achieved by coherence between firing rate oscillation in a sending region and gain modulation in a receiving region. Although this hypothesis has stimulated extensive work, it remains unclear whether the mechanism can in principle allow reliable and selective information transfer. Here we use a simple mathematical model to investigate how accurately coherent gain modulation can filter a population-coded target signal from task-irrelevant distracting inputs. We show that selective communication can indeed be achieved, although the structure of oscillatory activity in the target and distracting networks must satisfy certain previously unrecognized constraints. Firstly, the target input must be differentiated from distractors by the amplitude, phase or frequency of its oscillatory modulation. When distracting inputs oscillate incoherently in the same frequency band as the target, communication accuracy is severely degraded because of varying overlap between the firing rate oscillations of distracting inputs and the gain modulation in the receiving region. Secondly, the oscillatory modulation of the target input must be strong in order to achieve a high signal-to-noise ratio relative to stochastic spiking of individual neurons. Thus, whilst providing a quantitative demonstration of the power of coherent oscillatory gain modulation to flexibly control information flow, our results identify constraints imposed by the need to avoid interference between signals, and reveal a likely organizing principle for the structure of neural oscillations in the brain.

Distributed regions of mammalian brains transiently engage in coherent oscillations, often at specific stages of behavioral or cognitive tasks. This activity may play a role in controlling information flow among connected regions, allowing the brain's connectivity structure to be flexibly reconfigured in response to changing task demands. We have used a computational model to investigate the conditions under which oscillations can generate selective communication through a mechanism in which the excitability of neurons in one region is modulated coherently with a firing rate oscillation in another region. Our results demonstrate that this mechanism is able to accurately and selectively control the flow of signals encoded as spatial patterns of firing rate. However, we found that the requirement to avoid interference between different signals imposes previously unrecognised constraints on the structures of oscillatory activity that can efficiently support this mechanism. These constraints may be an organizing principle for the structured oscillatory activity observed in vivo.

Daland Herrmann (2001)
The individual properties of visual objects, like form or color, are represented in different areas in our visual cortex. In order to perceive one coherent object, its features have to be bound together. This was found to be achieved in cat and monkey brains by temporal correlation of the firing rates of neurons which code the same object. This firing rate is predominantly observed in the gamma frequency range (approx. 30-80 Hz, mainly around 40 Hz). In addition, it has been shown in humans that stimuli which flicker at gamma frequencies are processed faster by our brains than when they flicker at different frequencies. These effects could be due to neural oscillators, which preferably oscillate at certain frequencies, so-called resonance frequencies. It is also known that neurons in visual cortex respond to flickering stimuli at the frequency of the flickering light. If neural oscillators exist with resonance frequencies, they should respond more strongly to stimulation with their resonance frequency. We performed an experiment, where ten human subjects were presented flickering light at frequencies from 1 to 100 Hz in 1-Hz steps. The event-related potentials exhibited steady-state oscillations at all frequencies up to at least 90 Hz. Interestingly, the steady-state potentials exhibited clear resonance phenomena around 10, 20, 40 and 80 Hz. This could be a potential neural basis for gamma oscillations in binding experiments. The pattern of results resembles that of multiunit activity and local field potentials in cat visual cortex.

Henry D. Reyes,  Frances Chance,  Nicholas L. Abbott (2002)
Gain modulation is a prominent feature of neuronal activity recorded in behaving animals, but the mechanism by which it occurs is unknown. By introducing a barrage of excitatory and inhibitory synaptic conductances that mimics conditions encountered in vivo into pyramidal neurons in slices of rat somatosensory cortex, we show that the gain of a neuronal response to excitatory drive can be modulated by varying the level of "background" synaptic input. Simultaneously increasing both excitatory and inhibitory background firing rates in a balanced manner results in a divisive gain modulation of the neuronal response without appreciable signal-independent increases in firing rate or spike-train variability. These results suggest that, within active cortical circuits, the overall level of synaptic input to a neuron acts as a gain control signal that modulates responsiveness to excitatory drive.

Designed the simulations and analyzed the results: TEA. Conceived the study and wrote the paper: TEA DMK.

This work was supported by the Wellcome Trust and European Research Council. The funders had no role in study design, data collection and analysis, decision to publish, or preparation of the manuscript.