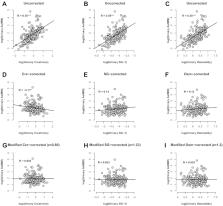 Spot urinary concentrations of environmental exposure biomarkers require correction for dilution. There is no consensus on the most appropriate method, with creatinine used by default despite lacking theoretical robustness. We comparatively assessed the efficacy of creatinine; specific gravity (SG); osmolality and modifications of all three for dilution correcting urinary arsenic. For 202 participants with urinary arsenic, creatinine, osmolality and SG measurements paired to drinking water As, we compared the performance corrections against two independent criteria: primarily, (A) correlations of corrected urinary As and the dilution measurements used to correct them - weak correlations indicating good performance and (B) correlations of corrected urinary As and drinking water As - strong correlations indicating good performance. More than a third of variation in spot urinary As concentrations was attributable to dilution. Conventional SG and osmolality correction removed significant dilution variation from As concentrations, whereas conventional creatinine over-corrected, and modifications of all three removed measurable dilution variation. Modified creatinine and both methods of SG and osmolality generated stronger correlations of urinary and drinking water As concentrations than conventional creatinine, which gave weaker correlations than uncorrected values. A disparity in optima between performance criteria was observed, with much smaller improvements possible for Criterion B relative to A. Conventional corrections – particularly creatinine - limit the utility spot urine samples, whereas a modified technique outlined here may allow substantial improvement and can be readily retrospectively applied to existing datasets. More studies are needed to optimize urinary dilution correction methods. Covariates of urinary dilution measurements still warrant consideration.

Influence of muscle mass and physical activity on serum and urinary creatinine and serum cystatin C.

Viviane Menon,  A. Ahmed,  Ita Heilberg … (2008)
For addressing the influence of muscle mass on serum and urinary creatinine and serum cystatin C, body composition was assessed by skinfold thickness measurement and bioelectrical impedance analyses. A total of 170 healthy individuals (92 women, 78 men) were classified as sedentary or with mild or moderate/intense physical activity. Blood, 24-h urine samples, and 24-h food recall were obtained from all individuals. Serum and urinary creatinine correlated significantly with body weight, but the level of correlation with lean mass was even greater. There was no significant correlation between body weight and lean mass with cystatin C. Individuals with moderate/intense physical activity presented significantly lower mean body mass index (23.1 +/- 2.5 versus 25.7 +/- 3.9 kg/m(2)) and higher lean mass (55.3 +/- 10.0 versus 48.5 +/- 10.4%), serum creatinine (1.04 +/- 0.12 versus 0.95 +/- 0.17 mg/dl), urinary creatinine (1437 +/- 471 versus 1231 +/- 430 mg/24 h), protein intake (1.4 +/- 0.6 versus 1.1 +/- 0.6 g/kg per d), and meat intake (0.7 +/- 0.3 versus 0.5 +/- 0.4 g/kg per d) than the sedentary individuals. Conversely, mean serum cystatin did not differ between these two groups. A multivariate analysis of covariance showed that lean mass was significantly related to serum and urinary creatinine but not with cystatin, even after adjustment for protein/meat intake and physical activity. Cystatin C may represent a more adequate alternative to assess renal function in individuals with higher muscle mass when mild kidney impairment is suspected.

Arsenic exposure and prevalence of type 2 diabetes in US adults.

Eliseo Guallar,  Ana Navas-Acien,  Roberto Pastor-Barriuso … (2008)
High chronic exposure to inorganic arsenic in drinking water has been related to diabetes development, but the effect of exposure to low to moderate levels of inorganic arsenic on diabetes risk is unknown. In contrast, arsenobetaine, an organic arsenic compound derived from seafood intake, is considered nontoxic. To investigate the association of arsenic exposure, as measured in urine, with the prevalence of type 2 diabetes in a representative sample of US adults. Cross-sectional study in 788 adults aged 20 years or older who participated in the 2003-2004 National Health and Nutrition Examination Survey (NHANES) and had urine arsenic determinations. Prevalence of type 2 diabetes across intake of arsenic. The median urine levels of total arsenic, dimethylarsinate, and arsenobetaine were 7.1, 3.0, and 0.9 mug/L, respectively. The prevalence of type 2 diabetes was 7.7%. After adjustment for diabetes risk factors and markers of seafood intake, participants with type 2 diabetes had a 26% higher level of total arsenic (95% confidence interval [CI], 2.0%-56.0%) and a nonsignificant 10% higher level of dimethylarsinate (95% CI, -8.0% to 33.0%) than participants without type 2 diabetes, and levels of arsenobetaine were similar to those of participants without type 2 diabetes. After similar adjustment, the odds ratios for type 2 diabetes comparing participants at the 80th vs the 20th percentiles were 3.58 for the level of total arsenic (95% CI, 1.18-10.83), 1.57 for dimethylarsinate (95% CI, 0.89-2.76), and 0.69 for arsenobetaine (95% CI, 0.33-1.48). After adjustment for biomarkers of seafood intake, total urine arsenic was associated with increased prevalence of type 2 diabetes. This finding supports the hypothesis that low levels of exposure to inorganic arsenic in drinking water, a widespread exposure worldwide, may play a role in diabetes prevalence. Prospective studies in populations exposed to a range of inorganic arsenic levels are needed to establish whether this association is causal.

Barbro Nermell,  Anna-Lena Lindberg,  Mahfuzar Rahman … (2008)
This study aims at evaluating the suitability of adjusting urinary concentrations of arsenic, or any other urinary biomarker, for variations in urine dilution by creatinine and specific gravity in a malnourished population. We measured the concentrations of metabolites of inorganic arsenic, creatinine and specific gravity in spot urine samples collected from 1466 individuals, 5-88 years of age, in Matlab, rural Bangladesh, where arsenic-contaminated drinking water and malnutrition are prevalent (about 30% of the adults had body mass index (BMI) below 18.5 kg/m(2)). The urinary concentrations of creatinine were low; on average 0.55 g/L in the adolescents and adults and about 0.35 g/L in the 5-12 years old children. Therefore, adjustment by creatinine gave much higher numerical values for the urinary arsenic concentrations than did the corresponding data expressed as microg/L, adjusted by specific gravity. As evaluated by multiple regression analyses, urinary creatinine, adjusted by specific gravity, was more affected by body size, age, gender and season than was specific gravity. Furthermore, urinary creatinine was found to be significantly associated with urinary arsenic, which further disqualifies the creatinine adjustment.