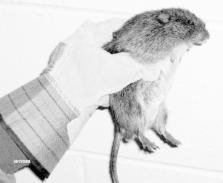 Journal: The Laboratory Rabbit, Guinea Pig, Hamster, and Other Rodents

This chapter studies the cotton rat, Sigmodon hispidus, which is a New World rodent with a stocky, robust stature. The average adult weight of a cotton rat is between 100 and 250 gm. The name Sigmodon comes from the sigmoid enamel loops on the grinding surface of the molar. Sexual dimorphism is not prominent, but males and females can be distinguished based on the size of the genital papilla and distance from the anus. The cotton rat is distinguished from the Norway rat by its smaller size, shorter tail, and longer grizzled fur. The lifespan of the hispid cotton rat is less than 6 months in the wild but in captivity animals have a survival span up to 23 months of age. The cotton rat ( Sigmodon) species has been recognized as a significant animal model for diseases caused by a variety of human and rodent pathogens. The primary research use for cotton rats is for studies into infectious disease and immunology.

The cotton rat provides a useful small-animal model for the study of influenza virus pathogenesis.

Carmen Blanco-Aparicio,  Forbes D Porter,  Martin Ottolini … (2005)
Influenza A virus continues to cause annual epidemics. The emergence of avian viruses in the human population poses a pandemic threat, and has highlighted the need for more effective influenza vaccines and antivirals. Development of such therapeutics would be enhanced by the use of a small-animal model that is permissive for replication of human influenza virus, and for which reagents are available to dissect the host response. A model is presented of nasal and pulmonary infection in adult inbred cotton rats (Sigmodon hispidus) that does not require viral 'adaptation'. It was previously demonstrated that animals infected intranasally with 10(7) TCID50 of a recent H3N2 influenza, A/Wuhan/359/95, have increased breathing rates. In this report it is shown that this is accompanied by weight loss and decreased temperature. Virus replication peaked within 24 h in the lung, with peak titres proportional to the infecting dose, clearing by day 3. Replication was more permissive in nasal tissues, and persisted for 6 days. Pulmonary pathology included early bronchiolar epithelial cell damage, followed by extensive alveolar and interstitial pneumonia, which persisted for nearly 3 weeks. Interleukin 1 alpha (IL1alpha), alpha interferon (IFN-alpha), IL6, tumour necrosis factor alpha (TNF-alpha), GROalpha and MIP-1beta mRNA were elevated soon after infection, and expression coincided with virus replication. A biphasic response was observed for RANTES, IFN-gamma, IL4, IL10 and IL12-p40, with increased mRNA levels early during virus replication followed by a later increase that coincided with pulmonary inflammation. These results indicate that cotton rats will be useful for further studies of influenza pathogenesis and immunity.