Degradation of 2,4,6-trinitrotoluene by P. aeruginosa and characterization of some metabolites 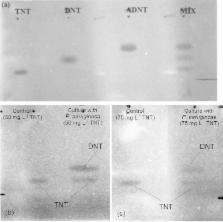 Degradation of 2,4,6-trinitrotoluene (TNT), a nitroaromatic explosive found in the soil and ground water, was investigated using Pseudomonas aeruginosa in in vitro experiments . Biodegradable abilitiy of this bacteria was performed with 50 and 75 mg L −1 TNT concentrations in a defined liquid medium for 96 h time period. Treatment of TNT in supernatant samples taken at 0, 6, 12, 24, 48, 72 and 96 h from agitated vessels was followed by reverse-phase high-performance liquid chromatography (HPLC). In cultures supplemented with 50 and 75 mgL −1 TNT, after 96 h of incubation 46% and 59% reduction were detected respectively. Two metabolites as degradation intermediates with nitrite release into the medium, 2,4-dinitrotoluene (2,4-DNT) and 4-aminodinitrotoluene (4-ADNT), were elucidated by thin layer chromatography (TLC) and gas chromatography-mass spectrometry (GC-MS). These findings clearly indicate that Pseudomonas aeruginosa can be used in bioremediation of TNT contaminated sites.

Nitroaromatic compounds, from synthesis to biodegradation.

Kou-San Ju,  Rebecca E Parales (2010)
Nitroaromatic compounds are relatively rare in nature and have been introduced into the environment mainly by human activities. This important class of industrial chemicals is widely used in the synthesis of many diverse products, including dyes, polymers, pesticides, and explosives. Unfortunately, their extensive use has led to environmental contamination of soil and groundwater. The nitro group, which provides chemical and functional diversity in these molecules, also contributes to the recalcitrance of these compounds to biodegradation. The electron-withdrawing nature of the nitro group, in concert with the stability of the benzene ring, makes nitroaromatic compounds resistant to oxidative degradation. Recalcitrance is further compounded by their acute toxicity, mutagenicity, and easy reduction into carcinogenic aromatic amines. Nitroaromatic compounds are hazardous to human health and are registered on the U.S. Environmental Protection Agency's list of priority pollutants for environmental remediation. Although the majority of these compounds are synthetic in nature, microorganisms in contaminated environments have rapidly adapted to their presence by evolving new biodegradation pathways that take advantage of them as sources of carbon, nitrogen, and energy. This review provides an overview of the synthesis of both man-made and biogenic nitroaromatic compounds, the bacteria that have been identified to grow on and completely mineralize nitroaromatic compounds, and the pathways that are present in these strains. The possible evolutionary origins of the newly evolved pathways are also discussed.

William Spain (1994)
Nitroaromatic compounds are released into the biosphere almost exclusively from anthropogenic sources. Some compounds are produced by incomplete combustion of fossil fuels; others are used as synthetic intermediates, dyes, pesticides, and explosives. Recent research revealed a number of microbial systems capable of transforming or biodegrading nitroaromatic compounds. Anaerobic bacteria can reduce the nitro group via nitroso and hydroxylamino intermediates to the corresponding amines. Isolates of Desulfovibrio spp. can use nitroaromatic compounds as their source of nitrogen. They can also reduce 2,4,6-trinitrotoluene to 2,4,6-triaminotoluene. Several strains of Clostridium can catalyze a similar reduction and also seem to be able to degrade the molecule to small aliphatic acids. Anaerobic systems have been demonstrated to destroy munitions and pesticides in soil. Fungi can extensively degrade or mineralize a variety of nitroaromatic compounds. For example, Phanerochaete chrysosporium mineralizes 2,4-dinitrotoluene and 2,4,6-trinitrotoluene and shows promise as the basis for bioremediation strategies. The anaerobic bacteria and the fungi mentioned above mostly transform nitroaromatic compounds via fortuitous reactions. In contrast, a number of nitroaromatic compounds can serve as growth substrates for aerobic bacteria. Removal or productive metabolism of nitro groups can be accomplished by four different strategies. (a) Some bacteria can reduce the aromatic ring of dinitro and trinitro compounds by the addition of a hydride ion to form a hydride-Meisenheimer complex, which subsequently rearomatizes with the elimination of nitrite. (b) Monooxygenase enzymes can add a single oxygen atom and eliminate the nitro group from nitrophenols. (c) Dioxygenase enzymes can insert two hydroxyl groups into the aromatic ring and precipitate the spontaneous elimination of the nitro group from a variety of nitroaromatic compounds. (d) Reduction of the nitro group to the corresponding hydroxylamine is the initial reaction in the productive metabolism of nitrobenzene, 4-nitrotoluene, and 4-nitrobenzoate. The hydroxylamines undergo enzyme-catalyzed rearrangements to hydroxylated compounds that are substrates for ring-fission reactions. Potential applications of the above reactions include not only the biodegradation of environmental contaminants, but also biocatalysis and synthesis of valuable organic molecules.

Desmond A Nunez,  A Robles Caballero,  Jose Ramos (2001)
Nitroaromatic compounds are xenobiotics that have found multiple applications in the synthesis of foams, pharmaceuticals, pesticides, and explosives. These compounds are toxic and recalcitrant and are degraded relatively slowly in the environment by microorganisms. 2,4,6-Trinitrotoluene (TNT) is the most widely used nitroaromatic compound. Certain strains of Pseudomonas and fungi can use TNT as a nitrogen source through the removal of nitrogen as nitrite from TNT under aerobic conditions and the further reduction of the released nitrite to ammonium, which is incorporated into carbon skeletons. Phanerochaete chrysosporium and other fungi mineralize TNT under ligninolytic conditions by converting it into reduced TNT intermediates, which are excreted to the external milieu, where they are substrates for ligninolytic enzymes. Most if not all aerobic microorganisms reduce TNT to the corresponding amino derivatives via the formation of nitroso and hydroxylamine intermediates. Condensation of the latter compounds yields highly recalcitrant azoxytetranitrotoluenes. Anaerobic microorganisms can also degrade TNT through different pathways. One pathway, found in Desulfovibrio and Clostridium, involves reduction of TNT to triaminotoluene; subsequent steps are still not known. Some Clostridium species may reduce TNT to hydroxylaminodinitrotoluenes, which are then further metabolized. Another pathway has been described in Pseudomonas sp. strain JLR11 and involves nitrite release and further reduction to ammonium, with almost 85% of the N-TNT incorporated as organic N in the cells. It was recently reported that in this strain TNT can serve as a final electron acceptor in respiratory chains and that the reduction of TNT is coupled to ATP synthesis. In this review we also discuss a number of biotechnological applications of bacteria and fungi, including slurry reactors, composting, and land farming, to remove TNT from polluted soils. These treatments have been designed to achieve mineralization or reduction of TNT and immobilization of its amino derivatives on humic material. These approaches are highly efficient in removing TNT, and increasing amounts of research into the potential usefulness of phytoremediation, rhizophytoremediation, and transgenic plants with bacterial genes for TNT removal are being done.

All the content of the journal, except where otherwise noted, is licensed under a Creative Commons License CC BY-NC.