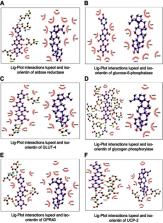 Background: In silico characterization can help to explain the interaction between molecules and predict three-dimensional structures. Various studies have confirmed the glucose-lowering effects of plant extracts, ie, lupeol and iso-orientin, which enable them to be used as antidiabetic agents.

Purpose: Aims of the present study were to evaluate the hypoglycemic activities of lupeol and iso-orientin in a rat model. The study proposed the effects of alloxan on blood glucose level, body weight, and oxidative stress.

Conclusion: Results of the study affirmed the antidiabetic activities of lupeol and iso-orientin. Administration of these extracts (either individually or in combination) significantly reduced blood glucose levels and oxidative stress. Hence, it may be considered beneficial in the treatment of diabetes.

Simon C. Lovell,  Ian Davis,  W Bryan Arendall … (2003)
Geometrical validation around the Calpha is described, with a new Cbeta measure and updated Ramachandran plot. Deviation of the observed Cbeta atom from ideal position provides a single measure encapsulating the major structure-validation information contained in bond angle distortions. Cbeta deviation is sensitive to incompatibilities between sidechain and backbone caused by misfit conformations or inappropriate refinement restraints. A new phi,psi plot using density-dependent smoothing for 81,234 non-Gly, non-Pro, and non-prePro residues with B < 30 from 500 high-resolution proteins shows sharp boundaries at critical edges and clear delineation between large empty areas and regions that are allowed but disfavored. One such region is the gamma-turn conformation near +75 degrees,-60 degrees, counted as forbidden by common structure-validation programs; however, it occurs in well-ordered parts of good structures, it is overrepresented near functional sites, and strain is partly compensated by the gamma-turn H-bond. Favored and allowed phi,psi regions are also defined for Pro, pre-Pro, and Gly (important because Gly phi,psi angles are more permissive but less accurately determined). Details of these accurate empirical distributions are poorly predicted by previous theoretical calculations, including a region left of alpha-helix, which rates as favorable in energy yet rarely occurs. A proposed factor explaining this discrepancy is that crowding of the two-peptide NHs permits donating only a single H-bond. New calculations by Hu et al. [Proteins 2002 (this issue)] for Ala and Gly dipeptides, using mixed quantum mechanics and molecular mechanics, fit our nonrepetitive data in excellent detail. To run our geometrical evaluations on a user-uploaded file, see MOLPROBITY (http://kinemage.biochem.duke.edu) or RAMPAGE (http://www-cryst.bioc.cam.ac.uk/rampage). Copyright 2003 Wiley-Liss, Inc.

Joe Dundas,  Zheng Ouyang,  Jeffery Tseng … (2006)
Cavities on a proteins surface as well as specific amino acid positioning within it create the physicochemical properties needed for a protein to perform its function. CASTp () is an online tool that locates and measures pockets and voids on 3D protein structures. This new version of CASTp includes annotated functional information of specific residues on the protein structure. The annotations are derived from the Protein Data Bank (PDB), Swiss-Prot, as well as Online Mendelian Inheritance in Man (OMIM), the latter contains information on the variant single nucleotide polymorphisms (SNPs) that are known to cause disease. These annotated residues are mapped to surface pockets, interior voids or other regions of the PDB structures. We use a semi-global pair-wise sequence alignment method to obtain sequence mapping between entries in Swiss-Prot, OMIM and entries in PDB. The updated CASTp web server can be used to study surface features, functional regions and specific roles of key residues of proteins.