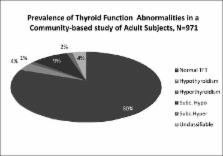 A Sastry,  Sascha Chopra,  R. Marwaha … (2008)
Interpretation of thyroid function tests during pregnancy needs trimester-related reference intervals from pregnant populations with minimal risk for thyroid dysfunction. While India has become iodine sufficient after two decades of salt iodisation, there is no normative data for thyroid function from healthy pregnant women of this country. To determine trimester-specific reference ranges for free triiodothyronine (FT(3)), free thyroxine (FT(4)) and thyrotropin (TSH) from healthy pregnant Indian women. Cross-sectional study in a reference population of pregnant women. Primary care level obstetric department in India. Women with uncomplicated pregnancy in any trimester. Five hundred and forty-one apparently healthy pregnant women with uncomplicated single intrauterine gestations reporting to the Armed Forces Clinic in any trimester were consecutively recruited. Clinical examination, thyroid ultrasound for echogenicity and nodularity and estimation of FT(3), FT(4), TSH and antithyroid antibodies (antithyroperoxidase [anti-TPO] and antithyroglobulin [anti-Tg]) using electrochemiluminescence technique were carried out. From this entire sample, a disease- and risk-free reference population was obtained by excluding those with any known factor that could affect thyroid function or those who were being treated for thyroid dysfunction. None. Of the 541 consecutive pregnant women in different trimesters enrolled for the study, 210 women were excluded. The composition of reference population comprising 331 women was 107 in first trimester, 137 in second trimester and 87 in third trimester. The 5th and 95th percentiles values were used to determine the reference ranges for FT(3), FT(4) and TSH. The trimester-wise values in the first, second and third trimesters were: FT(3) (1.92-5.86, 3.2-5.73 and 3.3-5.18 pM/l), FT(4) (12-19.45, 9.48-19.58 and 11.32-17.7 pM/l) and TSH (0.6-5.0, 0.44-5.78 and 0.74-5.7 iu/ml), respectively. Analysis of mean, median values for FT(3), FT(4) and TSH between each trimester showed no significant difference in FT(3) and TSH values (95% CI). However, FT(4) showed significant variation between trimesters with values decreasing with advancing gestational age (P value: first versus second = 0.015, first versus third = 0.003 and second versus third = not significant). Women with antibody positivity and hypoechogenicity of thyroid gland had significantly higher TSH values when compared with women with antibody negativity and normoechogenicity. Reference ranges of FT(3), FT(4) and TSH have been established for pregnant Indian women using 5th and 95th percentiles.

K Sundaram,  Arumugam Jayakumar,  V Menon … (2009)
India is in the transition phase from iodine deficiency to iodine sufficiency, and this is expected to change the thyroid status of the population. The thyroid status and auto-immune status of adult Indian population in the postiodisation phase is largelyunknown, and this study was conducted to answer this question. A cross-sectional population survey was conducted in two phases among the residents of urban coastal area of central Kerala. The initial phase included a house-to-house survey of 3069 adults (>18 years of age), selected by cluster sampling method. From the surveyed population, 986 subjects underwent further physical examination and biochemical evaluation for thyroid function, thyroid autoimmunity status and iodine status. The total prevalence of goitre was 12.2% and median urine iodine excretion was 211.4 mcg/l (mean 220.3 +/- 99.5 mcg/l) indicating iodine sufficiency. Thyroid function abnormalities were present in 19.6% of subjects. Subclinical hypothyroidism was present in 9.4%. Among the population with normal thyroid function, 9.5% and 8.5% respectively had positive anti-TPO and anti-TG antibodies. Among those with thyroid dysfunction, 46.3% had positive anti-TPO and 26.8% were anti-TG positive. A significant proportion of this iodine-sufficient adult population had thyroid disorders. Further studies are required to characterise the reasons for this high prevalence. Iodine deficiency as well as thyroid dysfunction should both be the focus of public health strategies in susceptible populations.

Disorders of thyroid gland in India.

M P Desai (2015)
The profile of thyroid disorders encountered in pediatric and adolescent age groups in India is similar to that seen in most parts of the world except for the prevalence of iodine deficiency disorders in certain endemic regions of this country. Clinical presentation is most commonly for hypothyroidism and goiters and infrequently for hyperthyroidism. Of nearly 800 children referred for thyroid problems, 79% had hypothyroidism (goitrous as well as nongoitrous), 19% had euthyroid goiters and 2% had hyperthyroidism. Hypothyroidism was due to thyroid dysgenesis in 75% (aplasia/hypoplasia--50% and ectopic thyroid gland 25%), thyroiditis in nearly 5% and dyshormonogenes is in 20%. The incidence of congenital hypothyroidism in our experience of screening nearly 40,000 newborns is about 1 in 2,640, which is much higher than the worldwide average of 1 in 3,800. Diagnostic delay in hypothyroidism is common and is related to lack of awareness amongst primary healthy care practitioners and family physicians as well as the cost and availability of laboratory investigations. This delay, compounded with inadequate therapeutic surveillance is responsible for the poor outcome in affected children. High incidence of dyshormonogenesis, inherited as autosomal recessive trait also calls for genetic counselling and routine sibling examination. Our results of family studies on first degree relatives of children with thyroiditis revealed presence of antimicrosomal antibodies in 43% and thyroid disease in 26%. Many etiologic factors cause goiters which may be functionally euthyroid or hypothyroid with almost equal frequency in our series. In nearly 200 schools children surveyed for goiter prevalence, 8% in high socioeconomic groups and about 21% in the low income group, had goiters. Female predominance was marked. However, iodine deficiency was not the sole cause as revealed by dietary survey and urinary iodine estimations. Hyperthyroidism is infrequent, less severe and in our experience responded well to long-term administration of antithyroid drugs. A high index of clinical awareness and education of primary health workers will help a great deal in improving the ultimate outcome in children with thyroid disorders/hypothyroidism.