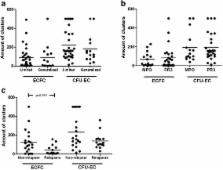 Endothelial progenitor cells (EPC) are of major importance in vascular repair under healthy circumstances. Vascular injury in need of repair occurs frequently in ANCA-associated vasculitis (AAV). A specialized T cell subset enhancing EPC function and differentiation has recently been described. These angiogenic T cells (T ang) may have an important impact on the vascular repair process. Therefore, the aim of our study was to investigate EPC and T ang in AAV.

Fifty-three patients suffering from AAV and 29 healthy controls (HC) were enrolled in our study. Forty-four patients were in remission, nine patients were in active state of disease. Patients were either untreated or were under monotherapy with low-dose steroids (max. 5 mg/day) at the time of sampling. Circulating EPC and T ang were determined by flow cytometry (FACS). The functional capacity of EPC was assessed by established cell culture methods.

The differentiation process of EPC is impaired in AAV. This may favor insufficient vascular repair promoting a relapsing disease course. Finally, these factors may explain a higher cardiovascular morbidity as has been previously documented in AAV.

The American College of Rheumatology 1990 criteria for the classification of Wegener's granulomatosis.

Ronald L Calabrese,  Blair Leavitt,  A Fauci … (1990)
Criteria for the classification of Wegener's granulomatosis (WG) were developed by comparing 85 patients who had this disease with 722 control patients with other forms of vasculitis. For the traditional format classification, 4 criteria were selected: abnormal urinary sediment (red cell casts or greater than 5 red blood cells per high power field), abnormal findings on chest radiograph (nodules, cavities, or fixed infiltrates), oral ulcers or nasal discharge, and granulomatous inflammation on biopsy. The presence of 2 or more of these 4 criteria was associated with a sensitivity of 88.2% and a specificity of 92.0%. A classification tree was also constructed with 5 criteria being selected. These criteria were the same as for the traditional format, but included hemoptysis. The classification tree was associated with a sensitivity of 87.1% and a specificity of 93.6%. We describe criteria which distinguish patients with WG from patients with other forms of vasculitis with a high level of sensitivity and specificity. This distinction is important because WG requires cyclophosphamide therapy, whereas many other forms of vasculitis can be treated with corticosteroids alone.

A protocol for phenotypic detection and enumeration of circulating endothelial cells and circulating progenitor cells in human blood.

Alison Cohen,  Dan G Duda,  R Jain … (2006)
Blood circulating endothelial cells (CECs) and circulating hematopoietic progenitor cells (CPCs) represent two cell populations that are thought to play important roles in tissue vascularization. CECs and CPCs are currently studied as surrogate markers in patients for more than a dozen pathologies, including heart disease and cancer. However, data interpretation has often been difficult because of multiple definitions, methods and protocols used to evaluate and count these cells by different laboratories. Here, we propose a cytometry protocol for phenotypic identification and enumeration of CECs and CPCs in human blood using four surface markers: CD31, CD34, CD133 and CD45. This method allows further phenotypic analyses to explore the biology of these cells. In addition, it offers a platform for longitudinal studies of these cells in patients with different pathologies. The protocol is relatively simple, inexpensive and can be adapted for multiple flow cytometer types or software. The procedure should take 2-2.5 h, and is expected to detect 0.1-6.0% viable CECs and 0.01-0.20% CPCs within blood mononuclear cell population.

Ivana Hollan,  Pier Meroni,  Joseph Ahearn … (2013)
Various autoimmune rheumatic diseases (ARDs), including rheumatoid arthritis, spondyloarthritis, vasculitis and systemic lupus erythematosus, are associated with premature atherosclerosis. However, premature atherosclerosis has not been uniformly observed in systemic sclerosis. Furthermore, although experimental models of atherosclerosis support the role of antiphospholipid antibodies in atherosclerosis, there is no clear evidence of premature atherosclerosis in antiphospholipid syndrome (APA). Ischemic events in APA are more likely to be caused by pro-thrombotic state than by enhanced atherosclerosis. Cardiovascular disease (CVD) in ARDs is caused by traditional and non-traditional risk factors. Besides other factors, inflammation and immunologic abnormalities, the quantity and quality of lipoproteins, hypertension, insulin resistance/hyperglycemia, obesity and underweight, presence of platelets bearing complement protein C4d, reduced number and function of endothelial progenitor cells, apoptosis of endothelial cells, epigenetic mechanisms, renal disease, periodontal disease, depression, hyperuricemia, hypothyroidism, sleep apnea and vitamin D deficiency may contribute to the premature CVD. Although most research has focused on systemic inflammation, vascular inflammation may play a crucial role in the premature CVD in ARDs. It may be involved in the development and destabilization of both atherosclerotic lesions and of aortic aneurysms (a known complication of ARDs). Inflammation in subintimal vascular and perivascular layers appears to frequently occur in CVD, with a higher frequency in ARD than in non-ARD patients. It is possible that this inflammation is caused by infections and/or autoimmunity, which might have consequences for treatment. Importantly, drugs targeting immunologic factors participating in the subintimal inflammation (e.g., T- and B-cells) might have a protective effect on CVD. Interestingly, vasa vasorum and cardiovascular adipose tissue may play an important role in atherogenesis. Inflammation and complement depositions in the vessel wall are likely to contribute to vascular stiffness. Based on biopsy findings, also inflammation in the myocardium and small vessels may contribute to premature CVD in ARDs (cardiac ischemia and heart failure). There is an enormous need for an improved CVD prevention in ARDs. Studies examining the effect of DMARDs/biologics on vascular inflammation and CV risk are warranted.