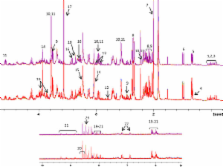 In vitro cell systems together with omics methods represent promising alternatives to conventional animal models for toxicity testing. Transcriptomic and proteomic approaches have been widely applied in vitro but relatively few studies have used metabolomics. Therefore, the goal of the present study was to develop an untargeted methodology for performing reproducible metabolomics on in vitro systems. The human liver cell line HepG2, and the well-known hepatotoxic and non-genotoxic carcinogen 2,3,7,8-tetrachlorodibenzo-p-dioxin (TCDD), were used as the in vitro model system and model toxicant, respectively.

The study focused on the analysis of intracellular metabolites using NMR, LC-MS and GC-MS, with emphasis on the reproducibility and repeatability of the data. State of the art pre-processing and alignment tools and multivariate statistics were used to detect significantly altered levels of metabolites after exposing HepG2 cells to TCDD. Several metabolites identified using databases, literature and LC-nanomate-Orbitrap analysis were affected by the treatment. The observed changes in metabolite levels are discussed in relation to the reported effects of TCDD.

Untargeted profiling of the polar and apolar metabolites of in vitro cultured HepG2 cells is a valid approach to studying the effects of TCDD on the cell metabolome. The approach described in this research demonstrates that highly reproducible experiments and correct normalization of the datasets are essential for obtaining reliable results. The effects of TCDD on HepG2 cells reported herein are in agreement with previous studies and serve to validate the procedures used in the present work.

2,3,7,8-tetrachlorodibenzo-p-dioxin and related halogenated aromatic hydrocarbons: examination of the mechanism of toxicity.

Gaylord Knutson,  Jesse A. Poland (1981)
In this review, we have examined the biochemical and toxic responses produced by halogenated aromatic hydrocarbons and have tried to develop a model for their mechanism of action. These compounds bind to a cellular receptor and evoke a sustained pleiotropic response. In many tissues this response consists of the expression of a battery of enzymes which are, for the most part, involved in drug metabolism, but in other tissues, those which develop toxicity, an additional set of genes is expressed which effects cellular involution, division, and/or differentiation. The toxicity of these compounds appears to be due to the sustained expression of a normal cellular regulatory system, of which we were previously unaware. In future investigations it is hoped that we will learn the nature and physiologic role of this regulatory system. Only then can we hope to understand the mechanism of toxicity of these compounds.

Andrew A. Maudsley,  V Govindaraju,  Edmond W K Young … (2000)
Proton NMR chemical shift and J-coupling values are presented for 35 metabolites that can be detected by in vivo or in vitro NMR studies of mammalian brain. Measurements were obtained using high-field NMR spectra of metabolites in solution, under conditions typical for normal physiological temperature and pH. This information is presented with an accuracy that is suitable for computer simulation of metabolite spectra to be used as basis functions of a parametric spectral analysis procedure. This procedure is verified by the analysis of a rat brain extract spectrum, using the measured spectral parameters. In addition, the metabolite structures and example spectra are presented, and clinical applications and MR spectroscopic measurements of these metabolites are reviewed. Copyright 2000 John Wiley & Sons, Ltd.