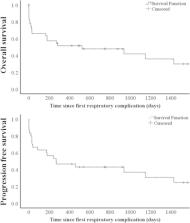 J Vose, Steven L. Kunkel, Scott Lowe … (2001)
To determine the safety and efficacy of the combination of the chimeric anti-CD20 antibody Rituxan (rituximab, IDEC-C2B8; Genentech Inc, South San Francisco, CA) and cyclophosphamide, doxorubicin, vincristine, and prednisone (CHOP) chemotherapy in patients with aggressive non-Hodgkin's lymphoma (NHL). Thirty-three patients with previously untreated advanced aggressive B-cell NHL received six infusions of Rituxan (375 mg/m2 per dose) on day 1 of each cycle in combination with six doses of CHOP chemotherapy given on day 3 of each cycle. The ORR by investigator assessment confirmed by the sponsor was 94% (31 of 33 patients). Twenty patients experienced a complete response (CR) (61%), 11 patients had a partial response (PR) (33%), and two patients were classified as having progressive disease. In the 18 patients with an International Prognostic Index (IPI) score > or = 2, the combination of Rituxan plus CHOP achieved an ORR of 89% and CR of 56%. The median duration of response and time to progression had not been reached after a median observation time of 26 months. Twenty-nine of 31 responding patients remained in remission during this follow-up period, including 15 of 16 patients with an IPI score > or = 2. The most frequent adverse events attributed to Rituxan were fever and chills, primarily during the first infusion. Rituxan did not seem to compromise the ability of patients to tolerate CHOP; all patients completed the entire six courses of the combination. The bcl-2 translocation of blood or bone marrow was positive at baseline in 13 patients; 11 patients had follow-up specimens obtained (eight CR, three PR), and all had a negative bcl-2 status after therapy. Only one patient has reconverted to bcl-2 positivity, and all patients remain in clinical remission. This is the first report to demonstrate the safety and efficacy of the Rituxan chimeric anti-CD20 antibody in combination with standard-dose CHOP in the treatment of aggressive B-cell lymphoma. The clinical responses are at least comparable to those achieved with CHOP alone with no significant added toxicity. The presence or absence of the bcl-2 translocation did not affect the ability of patients to achieve a CR with this regimen. The ability to achieve sustained remissions in patients with an IPI score > or = 2 warrants further investigation with a randomized study.

H Lioté, B Séroussi, C. Mayaud … (2010)
The anti-CD20 antibody rituximab has been reported to induce a heterogeneous spectrum of lung disorders. The aim of the present study was to critically review data on the clinical presentations, causality assessments and management strategies of lung diseases possibly related to rituximab. A systematic literature review was performed on English-language reports in PubMed until September 2008. Cases of lung diseases ascribed to rituximab (n = 45) were identified, with three time-to-onset patterns. The most common presentation was acute/subacute hypoxaemic organising pneumonia (n = 37), starting 2 weeks after the last infusion (often around the fourth cycle) and resolving, in most cases, provided glucocorticoid therapy was given early. Acute respiratory distress syndrome occurred in five patients, within a few hours and usually after the first infusion. In the remaining three patients, macronodular organising pneumonia developed insidiously long after rituximab therapy and responded to steroids. Eight patients died. Based on time to onset, symptoms, and responses to discontinuation and rechallenge with rituximab and other drugs, 13 cases were highly compatible and 32 compatible with rituximab-induced lung disease. Knowledge of these presentations of rituximab-induced lung disease should prove helpful for diagnosis and causality assessment purposes. Time-to-onset data, suggesting different pathogenic mechanisms, support closer clinical and perhaps radiological monitoring between infusions, particularly in patients with a history of reversible respiratory symptoms.

M Nisar, Andrew Östör, Andreas Hadjinicolaou … (2012)
Rituximab (RTX), a B-cell depleting mAb, has been reported to cause pulmonary toxicity in many patients. As the use of this biologic is increasing, we have undertaken a systematic review of the literature to gauge the nature and extent of non-infection-related RTX-induced lung disease. A systematic literature review was undertaken to document all reported cases of RTX-associated interstitial lung disease (RTX-ILD), evaluating the epidemiological, clinical, radiological, histopathological, laboratory and management data from the available primary sources. The search was conducted using PubMed, the Cochrane Library and EMBASE up to June 2010 using the terms RTX in the advanced search option without limitations and all relevant publications reviewed manually. In addition, unpublished data from the Food and Drug Administration, the European Medicines Agency and the manufacturer (Roche) were evaluated to complement this search. Identified articles were included if they displayed a potential relationship between the administration of RTX and ILD following exclusion of other likely causes. A total of 121 cases of potential RTX-ILD were identified from 21 clinical studies/trials, 30 case reports and 10 case series. The most common indication for RTX was diffuse large B-cell lymphoma. RTX-ILD occurred more frequently in male patients and was most common during the fifth and sixth decades of life. In most cases, RTX was part of combination chemotherapy, but in 30 (24.7%) cases it was given as monotherapy. The mean and median number of cycles of RTX before disease onset was four, but cases following the first cycle or as late as the 12th cycle were also identified. The mean time of onset, from the last RTX infusion until symptom development or relevant abnormal radiological change was 30 days (range 0-158 days). Abnormal radiological findings were similar in all patients, with diffuse bilateral lung infiltrates apparent on chest radiographs and/or thoracic CT. Hypoxaemia was seen in all cases and pulmonary function tests were uniformly abnormal with a characteristic diffusion capacity deficit and restrictive ventilatory pattern. RTX-ILD was fatal in 18 cases. ILD is a rare but potentially fatal complication of RTX therapy. This diagnosis should be considered in any patient who develops respiratory symptoms or new radiographic changes while receiving this biologic agent.