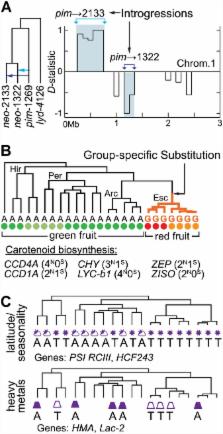 Speciation events often occur in rapid bursts of diversification, but the ecological and genetic factors that promote these radiations are still much debated. Using whole transcriptomes from all 13 species in the ecologically and reproductively diverse wild tomato clade ( Solanum sect. Lycopersicon), we infer the species phylogeny and patterns of genetic diversity in this group. Despite widespread phylogenetic discordance due to the sorting of ancestral variation, we date the origin of this radiation to approximately 2.5 million years ago and find evidence for at least three sources of adaptive genetic variation that fuel diversification. First, we detect introgression both historically between early-branching lineages and recently between individual populations, at specific loci whose functions indicate likely adaptive benefits. Second, we find evidence of lineage-specific de novo evolution for many genes, including loci involved in the production of red fruit color. Finally, using a “PhyloGWAS” approach, we detect environment-specific sorting of ancestral variation among populations that come from different species but share common environmental conditions. Estimated across the whole clade, small but substantial and approximately equal fractions of the euchromatic portion of the genome are inferred to contribute to each of these three sources of adaptive genetic variation. These results indicate that multiple genetic sources can promote rapid diversification and speciation in response to new ecological opportunity, in agreement with our emerging phylogenomic understanding of the complexity of both ancient and recent species radiations.

Wild tomatoes contain immense natural trait diversity; this study describes the evolutionary processes that have generated this diversity over only a few million years, drawing from multiple sources of genetic variation.

The formation of new and distinct species during evolution often occurs in rapid bursts of diversification in which many species arise within a short time frame. The ecological and genetic factors that promote these radiations are much debated. Here, we examine genome-wide patterns of molecular evolution that accompanied a rapid adaptive radiation among 13 species of wild tomato—the ecologically and reproductively diverse group that gave rise to the domesticated tomato. By analyzing patterns of genetic variation in thousands of expressed genes from multiple populations and species, we identify genome-wide signatures of rapid consecutive speciation events during 2.5 million years of diversification in this group. These signatures include pervasive shared ancestral variation and frequently discordant signals of relatedness among different parts of the genome. Our analyses find evidence for three unique sources of genetic variation that fuel adaptive diversification in this group—postspeciation hybridization, rapid accumulation of new mutations, and recruitment from ancestral variation—and identify specific examples of putatively adaptive loci drawn from each source. Recent analyses of other rapid radiations have also inferred a role for at least one of these mechanisms; our finding of all three simultaneously at work within the same diversifying clade suggests that they might be a universal feature of rapid adaptation to diverse environmental niches.

Pamela Colosimo, Kim E Hosemann, Sarita Balabhadra … (2005)
Major phenotypic changes evolve in parallel in nature by molecular mechanisms that are largely unknown. Here, we use positional cloning methods to identify the major chromosome locus controlling armor plate patterning in wild threespine sticklebacks. Mapping, sequencing, and transgenic studies show that the Ectodysplasin (EDA) signaling pathway plays a key role in evolutionary change in natural populations and that parallel evolution of stickleback low-plated phenotypes at most freshwater locations around the world has occurred by repeated selection of Eda alleles derived from an ancestral low-plated haplotype that first appeared more than two million years ago. Members of this clade of low-plated alleles are present at low frequencies in marine fish, which suggests that standing genetic variation can provide a molecular basis for rapid, parallel evolution of dramatic phenotypic change in nature.

Eric Durand, Nick Patterson, David Reich … (2011)
One enduring question in evolutionary biology is the extent of archaic admixture in the genomes of present-day populations. In this paper, we present a test for ancient admixture that exploits the asymmetry in the frequencies of the two nonconcordant gene trees in a three-population tree. This test was first applied to detect interbreeding between Neandertals and modern humans. We derive the analytic expectation of a test statistic, called the D statistic, which is sensitive to asymmetry under alternative demographic scenarios. We show that the D statistic is insensitive to some demographic assumptions such as ancestral population sizes and requires only the assumption that the ancestral populations were randomly mating. An important aspect of D statistics is that they can be used to detect archaic admixture even when no archaic sample is available. We explore the effect of sequencing error on the false-positive rate of the test for admixture, and we show how to estimate the proportion of archaic ancestry in the genomes of present-day populations. We also investigate a model of subdivision in ancestral populations that can result in D statistics that indicate recent admixture.

This is an open-access article distributed under the terms of the Creative Commons Attribution License, which permits unrestricted use, distribution, and reproduction in any medium, provided the original author and source are properly credited.

This work was supported by National Science Foundation grant Division of Environmental Biology-1136707. The funders had no role in study design, data collection and analysis, decision to publish, or preparation of the manuscript.