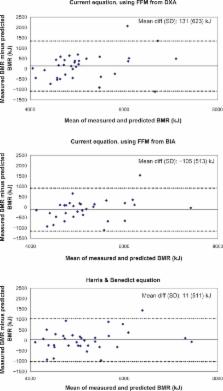 Malnutrition is a serious condition in chronic obstructive pulmonary disease (COPD). Successful dietary intervention calls for calculations of resting metabolic rate (RMR). One disease-specific prediction equation for RMR exists based on mainly male patients. To construct a disease-specific equation for RMR based on measurements in underweight or weight-losing women and men with COPD, RMR was measured by indirect calorimetry in 30 women and 11 men with a diagnosis of COPD and body mass index <21 kg/m 2. The following variables, possibly influencing RMR were measured: length, weight, middle upper arm circumference, triceps skinfold, body composition by dual energy x-ray absorptiometry and bioelectrical impedance, lung function, and markers of inflammation. Relations between RMR and measured variables were studied using univariate analysis according to Pearson. Gender and variables that were associated with RMR with a P value <0.15 were included in a forward multiple regression analysis. The best-fit multiple regression equation included only fat-free mass (FFM): RMR (kJ/day) = 1856 + 76.0 FFM (kg). To conclude, FFM is the dominating factor influencing RMR. The developed equation can be used for prediction of RMR in underweight COPD patients.

R Broekhuizen,  Annemie M. W. J. Schols,  Marius Scheepers … (2005)
Survival studies have consistently shown significantly greater mortality rates in underweight and normal-weight patients with chronic obstructive pulmonary disease (COPD) than in overweight and obese COPD patients. To compare the contributions of low fat-free mass and low fat mass to mortality, we assessed the association between body composition and mortality in COPD. We studied 412 patients with moderate-to-severe COPD [Global Initiative for Chronic Obstructive Pulmonary Disease (GOLD) stages II-IV, forced expiratory volume in 1 s of 36 +/- 14% of predicted (range: 19-70%). Body composition was assessed by using single-frequency bioelectrical impedance. Body mass index, fat-free mass index, fat mass index, and skeletal muscle index were calculated and related to recently developed reference values. COPD patients were stratified into defined categories of tissue-depletion pattern. Overall mortality was assessed at the end of follow-up. Semistarvation and muscle atrophy were equally distributed among disease stages, but the highest prevalence of cachexia was seen in GOLD stage IV. Forty-six percent of the patients (n = 189) died during a maximum follow-up of 5 y. Cox regression models, with and without adjustment for disease severity, showed that fat-free mass index (relative risk: 0.90; 95% CI: 0.84, 0.96; P = 0.003) was an independent predictor of survival, but fat mass index was not. Kaplan-Meier and Cox regression plots for cachexia and muscle atrophy did not differ significantly. Fat-free mass is an independent predictor of mortality irrespective of fat mass. This study supports the inclusion of body-composition assessment as a systemic marker of disease severity in COPD staging.

J-L Mege,  D Barbier,  Mario Di Napoli … (1994)
Unexplained weight loss is common in chronic obstructive pulmonary disease (COPD). Blood levels of tumor necrosis factor-alpha (TNF-alpha), a cytokine causing cachexia in laboratory animals, are elevated in various human diseases associated with weight loss. We therefore prospectively measured TNF-alpha serum levels (immunoradiometric assay) in patients with clinically stable COPD (n = 30; all male; mean age, 65 yr) whose weight was less (Group I; n = 16) or more (Group II; n = 14) than the lower limit of normal taken from Metropolitan Life Insurance Company tables. The patients had no cause known to elevate TNF-alpha serum levels; notably, they were not infected. Group I patients had unintentionally lost weight during the previous year, whereas the weight of Group II patients had not changed during the same period. The two groups had similar chronic airflow obstruction and arterial blood gas impairment; hyperinflation and reduction in diffusing capacity were more pronounced in Group I, but differences were not significant. TNF-alpha serum levels (pg/ml; mean [SD]) were significantly higher in Group I than in Group II (70.2 [100.0] versus 6.7 [6.4]; p < 0.001). Group II TNF-alpha serum levels did not differ significantly from those of healthy subjects (7.8 [3.9]), whereas those of Group I were significantly higher (p < 0.001). Because renal function was in the normal range, we conclude that increased TNF-alpha production--and not decreased TNF-alpha clearance--is a likely cause of weight loss in patients with COPD.

Gender difference in smoking effects on lung function and risk of hospitalization for COPD: results from a Danish longitudinal population study.

Peter Lange,  Eva Prescott,  Judith P. Andersen … (1997)
Recent findings suggest that females may be more susceptible than males to the deleterious influence of tobacco smoking in developing chronic obstructive pulmonary disease (COPD). This paper studies the interaction of gender and smoking on development of COPD as assessed by lung function and hospital admission. A total of 13,897 subjects, born after 1920, from two population studies, 9,083 from the Copenhagen City Heart Study (CCHS) and 4,814 from the Glostrup Population Studies (GPS), were followed for 7-16 yrs. Data were linked with information on hospital admissions caused by COPD. Based on cross-sectional data, in the CCHS the estimated excess loss of forced expiratory volume in one second (FEV1) per pack-year of smoking was 7.4 mL in female smokers who inhaled and 6.3 mL in male smokers who inhaled. In the GPS, the corresponding excess loss of FEV1 was 10.5 and 8.4 mL in females and males, respectively. Two hundred and eighteen subjects in the CCHS and 23 in the GPS were hospitalized during follow-up. Risk associated with pack-years was higher in females than in males (relative risks (RRs) for 1-20, 20-40 and >40 pack-years were 7.0 (3.5-14.1), 9.8 (4.9-19.6) and 23.3 (10.7-50.9) in females, and 3.2 (1.1-9.1), 5.7 (2.2-14.3) and 8.4 (3.3-21.6) in males) but the interaction term gender x pack-years did not reach significance (p=0.08). Results were similar in the GPS. After adjusting for smoking in more detail, females in both cohorts had an increased risk of hospitalization for COPD compared to males with a RR of 1.5 (1.2-2.1) in the CCHS and 3.6 (1.4-9.0) in the GPS. This was not likely to be caused by a generally increased rate of hospital admission for females. Results were similar when including deaths from COPD as endpoint. In two independent population samples, smoking had greater impact on the lung function of females than males, and after adjusting for smoking females subsequently suffered a higher risk of being admitted to hospital for COPD. Results suggest that adverse effects of smoking on lung function may be greater in females than in males.