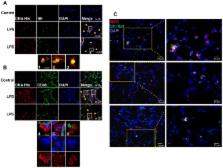 Neutrophils play an important role in innate immunity by defending the host organism against invading microorganisms. Antimicrobial activity of neutrophils is mediated by release of antimicrobial peptides, phagocytosis as well as formation of neutrophil extracellular traps (NET). These structures are composed of DNA, histones and granular proteins such as neutrophil elastase and myeloperoxidase. This study focused on the influence of NET on the host cell functions, particularly on human alveolar epithelial cells as the major cells responsible for gas exchange in the lung. Upon direct interaction with epithelial and endothelial cells, NET induced cytotoxic effects in a dose-dependent manner, and digestion of DNA in NET did not change NET-mediated cytotoxicity. Pre-incubation of NET with antibodies against histones, with polysialic acid or with myeloperoxidase inhibitor but not with elastase inhibitor reduced NET-mediated cytotoxicity, suggesting that histones and myeloperoxidase are responsible for NET-mediated cytotoxicity. Although activated protein C (APC) did decrease the histone-induced cytotoxicity in a purified system, it did not change NET-induced cytotoxicity, indicating that histone-dependent cytotoxicity of NET is protected against APC degradation. Moreover, in LPS-induced acute lung injury mouse model, NET formation was documented in the lung tissue as well as in the bronchoalveolar lavage fluid. These data reveal the important role of protein components in NET, particularly histones, which may lead to host cell cytotoxicity and may be involved in lung tissue destruction.

Zahra Goodarzi,  Samantha Tavener,  Christine Keys … (2007)
It has been known for many years that neutrophils and platelets participate in the pathogenesis of severe sepsis, but the inter-relationship between these players is completely unknown. We report several cellular events that led to enhanced trapping of bacteria in blood vessels: platelet TLR4 detected TLR4 ligands in blood and induced platelet binding to adherent neutrophils. This led to robust neutrophil activation and formation of neutrophil extracellular traps (NETs). Plasma from severely septic humans also induced TLR4-dependent platelet-neutrophil interactions, leading to the production of NETs. The NETs retained their integrity under flow conditions and ensnared bacteria within the vasculature. The entire event occurred primarily in the liver sinusoids and pulmonary capillaries, where NETs have the greatest capacity for bacterial trapping. We propose that platelet TLR4 is a threshold switch for this new bacterial trapping mechanism in severe sepsis.

Publisher ID: PONE-D-11-20556
DOI: 10.1371/journal.pone.0032366
PMC ID: 3289648
PubMed ID: 22389696
Copyright statement: Saffarzadeh et al. This is an open-access article distributed under the terms of the Creative Commons Attribution License, which permits unrestricted use, distribution, and reproduction in any medium, provided the original author and source are credited.