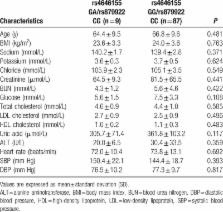 The angiotensin-converting enzyme 2-angiotensin-(1–7)-MAS axis (ACE2-Ang-[1–7]-MAS axis) plays an important role in the control of blood pressure. Some previous studies indicated that the genetic variants of ACE2 may have a potential to influence this axis. Therefore, the present study aimed at examining the association of ACE2 polymorphisms with circulating ACE2 and Ang-(1–7) levels in patients with essential hypertension.

Hypertensive patients who met the inclusion criteria were enrolled in the present study. Three Tag single-nucleotide polymorphisms (rs2106809, rs4646155, and rs879922) in ACE2 gene were genotyped for all participants. Circulating ACE2 and Ang-(1–7) levels were detected by enzyme-linked immunosorbent assay.

Gaetano Santulli,  Ersilia Cipolletta,  Daniela Sorriento … (2012)
Background The expression of calcium/calmodulin-dependent kinase IV (CaMKIV) was hitherto thought to be confined to the nervous system. However, a recent genome-wide analysis indicated an association between hypertension and a single-nucleotide polymorphism (rs10491334) of the human CaMKIV gene (CaMK4 ), which suggests a role for this kinase in the regulation of vascular tone. Methods and Results To directly assess the role of CaMKIV in hypertension, we characterized the cardiovascular phenotype of CaMK4 −/− mice. They displayed a typical hypertensive phenotype, including high blood pressure levels, cardiac hypertrophy, vascular and kidney damage, and reduced tolerance to chronic ischemia and myocardial infarction compared with wild-type littermates. Interestingly, in vitro experiments showed the ability of this kinase to activate endothelial nitric oxide synthase. Eventually, in a population study, we found that the rs10491334 variant associates with a reduction in the expression levels of CaMKIV in lymphocytes from hypertensive patients. Conclusions Taken together, our results provide evidence that CaMKIV plays a pivotal role in blood pressure regulation through the control of endothelial nitric oxide synthase activity. (J Am Heart Assoc. 2012;1:e001081 doi: 10.1161/JAHA.112.001081.)

M Lingis,  T Bolton,  Michael J Katovich … (2007)
Cardiac remodeling, which typically results from chronic hypertension or following an acute myocardial infarction, is a major risk factor for the development of heart failure and, ultimately, death. The renin-angiotensin system (RAS) has previously been established to play an important role in the progression of cardiac remodeling, and inhibition of a hyperactive RAS provides protection from cardiac remodeling and subsequent heart failure. Our previous studies have demonstrated that overexpression of angiotensin-converting enzyme 2 (ACE2) prevents cardiac remodeling and hypertrophy during chronic infusion of angiotensin II (ANG II). This, coupled with the knowledge that ACE2 is a key enzyme in the formation of ANG-(1-7), led us to hypothesize that chronic infusion of ANG-(1-7) would prevent cardiac remodeling induced by chronic infusion of ANG II. Infusion of ANG II into adult Sprague-Dawley rats resulted in significantly increased blood pressure, myocyte hypertrophy, and midmyocardial interstitial fibrosis. Coinfusion of ANG-(1-7) resulted in significant attenuations of myocyte hypertrophy and interstitial fibrosis, without significant effects on blood pressure. In a subgroup of animals also administered [d-Ala(7)]-ANG-(1-7) (A779), an antagonist to the reported receptor for ANG-(1-7), there was a tendency to attenuate the antiremodeling effects of ANG-(1-7). Chronic infusion of ANG II, with or without coinfusion of ANG-(1-7), had no effect on ANG II type 1 or type 2 receptor binding in cardiac tissue. Together, these findings indicate an antiremodeling role for ANG-(1-7) in cardiac tissue, which is not mediated through modulation of blood pressure or altered cardiac angiotensin receptor populations and may be at least partially mediated through an ANG-(1-7) receptor.

Renée Turner,  Donald J L Jones,  Scott L Carter … (2006)
The renin-angiotensin system is a key regulator of blood pressure (BP), with inhibitors of angiotensin-converting enzyme (ACE) used clinically to treat hypertension and other cardiovascular conditions. ACE2 is a newly identified member of this system, which converts angiotensin II to angiotensin, and of which the occurrence in plasma has not been investigated. The aim of this study was to determine the heritability of circulating ACE, ACE2, and neprilysin (NEP), which may also be a regulator of BP, in a family study, and to determine covariates that contribute to the variation in plasma activity. ACE, ACE2, and NEP activities were measured in plasma from 534 subjects in the Leeds Family Study using selective fluorogenic substrates. Genetic factors accounted for 24.5%, 67%, and 22.7% of the phenotypic variation in circulating ACE, ACE2, and NEP, respectively. ACE insertion/deletion polymorphism and other measured covariates accounted for 23.8% of variance in circulating ACE. High-density lipoprotein cholesterol was a significant determinant of circulating ACE2. Measured covariates accounted for 17.3% of variation in circulating NEP. ACE and NEP were associated with systolic and diastolic BP in univariate analyses; however, only ACE was independently associated with systolic and diastolic BP after accounting for covariates and shared childhood household.