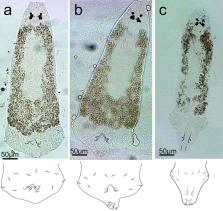 Tilapias are important aquaculture fishes that have been introduced widely all over the world, often carrying their monogenean parasites with them. An extensive investigation on monogeneans of invasive tilapias was conducted in 19 natural water sources in south China between July 2015 and December 2017. We found nine known species of monogeneans, i.e., Enterogyrus coronatus, E. malmbergi, Cichlidogyrus cirratus, C. halli, C. sclerosus, C. thurstonae, C. tilapiae, Scutogyrus longicornis, Gyrodactylus cichlidarum, and one unknown Gyrodactylus species. In addition to reporting ten new hosts and four new geographical records, we observed new morphological characteristics of these species. Observation on living specimens of Enterogyrus spp. demonstrated that these two species have characteristic opisthaptoral retraction capacities, while the opisthaptor glands were not observed in our specimens of E. coronatus and E. malmbergi. The morphological differences of the accessory piece of the male copulatory complex between C. cirratus and C. mbirizei (character for species differentiation) could result from the observation at different perspectives, which indicates that C. mbirizei is likely a synonym of C. cirratus. A more detailed structure of the sclerotized parts of Cichlidogyrus spp. and S. longicornis were revealed by scanning electron microscopy. As was the case for the monogeneans found on alien tilapias from other geographic regions, the present study confirmed the high potential of these monogeneans to establish populations in new habitats.

R Poulin,  John Kelly,  Andrew Townsend … (2009)
While there is good evidence linking animal introductions to impacts on native communities via disease emergence, our understanding of how such impacts occur is incomplete. Invasion ecologists have focused on the disease risks to native communities through "spillover" of infectious agents introduced with nonindigenous hosts, while overlooking a potentially more common mechanism of impact, that of "parasite spillback." We hypothesize that parasite spillback could occur when a nonindigenous species is a competent host for a native parasite, with the presence of the additional host increasing disease impacts in native species. Despite its lack of formalization in all recent reviews of the role of parasites in species introductions, aspects of the invasion process actually favor parasite spillback over spillover. We specifically review the animal-parasite literature and show that native species (arthropods, parasitoids, protozoa, and helminths) account for 67% of the parasite fauna of nonindigenous animals from a range of taxonomic groups. We show that nonindigenous species can be highly competent hosts for such parasites and provide evidence that infection by native parasites does spillback from nonindigenous species to native host species, with effects at both the host individual and population scale. We conclude by calling for greater recognition of parasite spillback as a potential threat to native species, discuss possible reasons for its neglect by invasion ecologists, and identify future research directions.

Antoine Pariselle,  L Pouyaud,  Marty R Deveney … (2005)
We studied the systematics of 14 species of monogenean (Ancyrocephalidae) gill parasites from West African tilapiine hosts (Cichlidae) using both morphological and genetic data. With these tools, we were able to: (i) confirm the validity of the previously described morphological parasite species and of the genus Scutogyrus; (ii) propose that some stenoxenous species (i.e., parasite species with more than one host) may be composed of sister species (e.g., Cichlidogyrus tilapiae); (iii) state that the use of the morphology of the haptoral sclerites is more suitable to infer phylogenetic relationships than the morphology of the genitalia (which seems to be more useful to resolve species-level identifications, presumably because of its faster rate of change). These results imply that: (i) the specificity of these monogenean parasites is greater than initially supposed (what were thought to be stenoxenous species may be assemblages of oïoxenous sister species); (ii) related species groups (i.e., "tilapiae," "halli," and "tiberianus") have to be, as genus Scutogyrus, validated within the 54 ancyrocephalid species described from 18 species of tilapiine hosts in West Africa, (iii) the group "tilapiae," due to its morphology and host range, have to be considered as being the most primitive; (iv) the occurrence of lateral transfers and parallel speciation processes are necessary to describe the repartition of the newly described parasite groups on the three host genera studied (Tilapia, Oreochromis, and Sarotherodon).