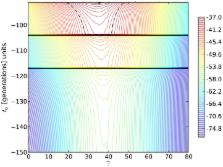 The challenge of distinguishing genetic drift from selection remains a central focus of population genetics. Time-sampled data may provide a powerful tool for distinguishing these processes, and we here propose approximate Bayesian, maximum likelihood, and analytical methods for the inference of demography and selection from time course data. Utilizing these novel statistical and computational tools, we evaluate whole-genome datasets of an influenza A H1N1 strain in the presence and absence of oseltamivir (an inhibitor of neuraminidase) collected at thirteen time points. Results reveal a striking consistency amongst the three estimation procedures developed, showing strongly increased selection pressure in the presence of drug treatment. Importantly, these approaches re-identify the known oseltamivir resistance site, successfully validating the approaches used. Enticingly, a number of previously unknown variants have also been identified as being positively selected. Results are interpreted in the light of Fisher's Geometric Model, allowing for a quantification of the increased distance to optimum exerted by the presence of drug, and theoretical predictions regarding the distribution of beneficial fitness effects of contending mutations are empirically tested. Further, given the fit to expectations of the Geometric Model, results suggest the ability to predict certain aspects of viral evolution in response to changing host environments and novel selective pressures.

In recent years, considerable attention has been given to the evolution of drug resistance in the influenza A H1N1 strain. As a major annual cause of morbidity and mortality, combined with the rapid global spread of drug resistance, influenza remains as one of the most important global health concerns. Our work here focuses on a novel multi-faceted population-genetic approach utilizing unique whole-genome multi-time point experimental datasets in both the presence and absence of drug treatment. In addition, we present novel theoretical results and two newly developed and widely applicable statistical methodologies for utilizing time-sampled data – with a focus on distinguishing the relative contribution of genetic drift from that of positive and purifying selection. Results illustrate the available mutational paths to drug resistance, and offer important insights in to the mode and tempo of adaptation in a viral population.

M Nei (1973)
A method is presented by which the gene diversity (heterozygosity) of a subdivided population can be analyzed into its components, i.e., the gene diversities within and between subpopulations. This method is applicable to any population without regard to the number of alleles per locus, the pattern of evolutionary forces such as mutation, selection, and migration, and the reproductive method of the organism used. Measures of the absolute and relative magnitudes of gene differentiation among subpopulations are also proposed.

Mortality associated with influenza and respiratory syncytial virus in the United States.

William Thompson,  David Shay (2003)
Influenza and respiratory syncytial virus (RSV) cause substantial morbidity and mortality. Statistical methods used to estimate deaths in the United States attributable to influenza have not accounted for RSV circulation. To develop a statistical model using national mortality and viral surveillance data to estimate annual influenza- and RSV-associated deaths in the United States, by age group, virus, and influenza type and subtype. Age-specific Poisson regression models using national viral surveillance data for the 1976-1977 through 1998-1999 seasons were used to estimate influenza-associated deaths. Influenza- and RSV-associated deaths were simultaneously estimated for the 1990-1991 through 1998-1999 seasons. Attributable deaths for 3 categories: underlying pneumonia and influenza, underlying respiratory and circulatory, and all causes. Annual estimates of influenza-associated deaths increased significantly between the 1976-1977 and 1998-1999 seasons for all 3 death categories (P<.001 for each category). For the 1990-1991 through 1998-1999 seasons, the greatest mean numbers of deaths were associated with influenza A(H3N2) viruses, followed by RSV, influenza B, and influenza A(H1N1). Influenza viruses and RSV, respectively, were associated with annual means (SD) of 8097 (3084) and 2707 (196) underlying pneumonia and influenza deaths, 36 155 (11 055) and 11 321 (668) underlying respiratory and circulatory deaths, and 51 203 (15 081) and 17 358 (1086) all-cause deaths. For underlying respiratory and circulatory deaths, 90% of influenza- and 78% of RSV-associated deaths occurred among persons aged 65 years or older. Influenza was associated with more deaths than RSV in all age groups except for children younger than 1 year. On average, influenza was associated with 3 times as many deaths as RSV. Mortality associated with both influenza and RSV circulation disproportionately affects elderly persons. Influenza deaths have increased substantially in the last 2 decades, in part because of aging of the population, underscoring the need for better prevention measures, including more effective vaccines and vaccination programs for elderly persons.

The authors wish to acknowledge the support of DARPA (Prophecy Program, Defense Advanced Research Agency ( http://www.darpa.mil/), Defense Sciences Office (DSO), Contract No. HR0011-11-C-0095) and the contributions of all the members of the ALiVE (Algorithms to Limit Viral Epidemics) working group. Additional funding came from grants from the Swiss National Science Foundation ( http://www.snf.ch/E/Pages/default.aspx), and a European Research Council Starting Grant (ERC; http://erc.europa.eu/) to JDJ. ASM was funded by an Early Postdoc Mobility fellowship from the Swiss National Science Foundation. The funders had no role in study design, data collection and analysis, decision to publish, or preparation of the manuscript.