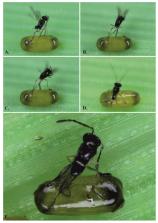 The parasitic wasp Anaphes flavipes (Förster, 1841) (Hymenoptera: Mymaridae) is an important egg parasitoid of cereal leaf beetles. Some species of cereal leaf beetle co-occur in the same localities, but the host specificity of the wasp to these crop pests has not yet been examined in detail. A lack of knowledge of host specificity can have a negative effect on the use of this wasps in biological control programs addressed to specific pest species or genus. In this study, laboratory experiments were conducted to assess the host specificity of A. flavipes for three species of cereal leaf beetles ( Oulema duftschmidi Redtenbacher, 1874, Oulema gallaeciana Heyden, 1879 and Oulema melanopus Linnaeus, 1758) in central Europe. For the first time, a new host defence against egg parasitoids occurring in O. gallaeciana from localities in the Czech Republic, a strong dark sticky layer on the egg surface, was found and described. The host specificity of A. flavipes was studied in the locality with the presence of this defence on O. gallaeciana eggs (the dark sticky layer) (Czech Republic) and in a control locality (Germany), where no such host defence was observed. Contrary to the idea that a host defence mechanism can change the host specificity of parasitoids, the wasps from these two localities did not display any differences in that. Respectively, even though it has been observed that eggs with sticky dark layer can prevent parasitization, the overall rate of parasitization of the three species of cereal beetles has not been affected. However, in our view, new host defence can influence the effects of biological control, as eggs of all Oulema spp. in the locality are protected against parasitization from the wasps stuck on the sticky layer of the host eggs of O. gallaeciana.

Arms races between and within species.

R Dawkins,  Shelly J. Krebs (1979)
An adaptation in one lineage (e.g. predators) may change the selection pressure on another lineage (e.g. prey), giving rise to a counter-adaptation. If this occurs reciprocally, an unstable runaway escalation or 'arms race' may result. We discuss various factors which might give one side an advantage in an arms race. For example, a lineage under strong selection may out-evolve a weakly selected one (' the life-dinner principle'). We then classify arms races in two independent ways. They may be symmetric or asymmetric, and they may be interspecific or intraspecific. Our example of an asymmetric interspecific arms race is that between brood parasites and their hosts. The arms race concept may help to reduce the mystery of why cuckoo hosts are so good at detecting cuckoo eggs, but so bad at detecting cuckoo nestlings. The evolutionary contest between queen and worker ants over relative parental investment is a good example of an intraspecific asymmetric arms race. Such cases raise special problems because the participants share the same gene pool. Interspecific symmetric arms races are unlikely to be important, because competitors tend to diverge rather than escalate competitive adaptations. Intraspecific symmetric arms races, exemplified by adaptations for male-male competition, may underlie Cope's Rule and even the extinction of lineages. Finally we consider ways in which arms races can end. One lineage may drive the other to extinction; one may reach an optimum, thereby preventing the other from doing so; a particularly interesting possibility, exemplified by flower-bee coevolution, is that both sides may reach a mutual local optimum; lastly, arms races may have no stable and but may cycle continuously. We do not wish necessarily to suggest that all, or even most, evolutionary change results from arms races, but we do suggest that the arms race concept may help to resolve three long-standing questions in evolutionary theory.