Immunopathogenesis of Human Sporotrichosis: What We Already Know 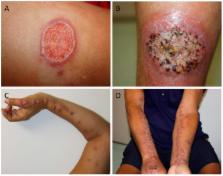 Sporotrichosis is a subacute/chronic mycosis caused by dimorphic fungus of the genus Sporothrix. This mycosis may affect both human and domestic animals and in the last few years, the geographic dispersion and increase of sporotrichosis worldwide has been observed. The occurrence of cases related to scratching/bites of domestic felines have increased, characterizing the disease as predominantly a zoonosis. In humans, sporotrichosis mainly involves the cutaneous tegument of infected patients, but other tissues may also present the infection. The main forms of clinical presentation are lymphocutanous sporotrichosis (LC) and fixed sporotrichosis (F). Although less common, mucosal, cutaneous disseminated, and extracutaneous forms have also been described. Multiple factors from the fungus and host can play a role in driving the clinical evolution of sporotrichosis to benign or severe disease. In this review, we discuss the immunopathological aspects involved in human sporotrichosis. Putting together the two branches of knowledge—host immune response and fungal evading mechanisms—we may perceive new possibilities in understanding the fungus–host interaction in order to be in a position to go further in the control of sporotrichosis.

Michelle Brown,  Geoffrey D. Brown (2005)
Dectin-1 is a natural killer (NK)-cell-receptor-like C-type lectin that is thought to be involved in innate immune responses to fungal pathogens. This transmembrane signalling receptor mediates various cellular functions, from fungal binding, uptake and killing, to inducing the production of cytokines and chemokines. These activities could influence the resultant immune response and can, in certain circumstances, lead to autoimmunity and disease. As I discuss here, understanding the molecular mechanisms behind these functions has revealed new concepts, including collaborative signalling with the Toll-like receptors (TLRs) and the use of spleen tyrosine kinase (SYK), that have implications for the role of other non-TLR pattern-recognition receptors in immunity.

Armando Schubach,  Rodrigo Henrique Paes,  Mônica Bastos de Lima Barros (2011)
Sporotrichosis, which is caused by the dimorphic fungus Sporothrix schenckii, is currently distributed throughout the world, especially in tropical and subtropical zones. Infection generally occurs by traumatic inoculation of soil, plants, and organic matter contaminated with the fungus. Certain leisure and occupational activities, such as floriculture, agriculture, mining, and wood exploitation, are traditionally associated with the mycosis. Zoonotic transmission has been described in isolated cases or in small outbreaks. Since the end of the 1990s there has been an epidemic of sporotrichosis associated with transmission by cats in Rio de Janeiro, Brazil. More than 2,000 human cases and 3,000 animal cases have been reported. In humans, the lesions are usually restricted to the skin, subcutaneous cellular tissue, and adjacent lymphatic vessels. In cats, the disease can evolve with severe clinical manifestations and frequent systemic involvement. The gold standard for sporotrichosis diagnosis is culture. However, serological, histopathological, and molecular approaches have been recently adopted as auxiliary tools for the diagnosis of this mycotic infection. The first-choice treatment for both humans and cats is itraconazole.

Arunaloke Chakrabarti,  Alexandro Bonifaz,  Maria Gutierrez-Galhardo … (2015)
Sporotrichosis is an endemic mycosis caused by the dimorphic fungus Sporothrix schenckii sensu lato. It has gained importance in recent years due to its worldwide prevalence, recognition of multiple cryptic species within the originally described species, and its distinctive ecology, distribution, and epidemiology across the globe. In this review, we describe the current knowledge of the taxonomy, ecology, prevalence, molecular epidemiology, and outbreaks due to S. schenckii sensu lato. Despite its omnipresence in the environment, this fungus has remarkably diverse modes of infection and distribution patterns across the world. We have delved into the nuances of how sporotrichosis is intimately linked to different forms of human activities, habitats, lifestyles, and environmental and zoonotic interactions. The purpose of this review is to stimulate discussion about the peculiarities of this unique fungal pathogen and increase the awareness of clinicians and microbiologists, especially in regions of high endemicity, to its emergence and evolving presentations and to kindle further research into understanding the unorthodox mechanisms by which this fungus afflicts different human populations.