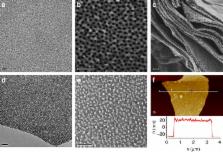 The ability to pattern functional moieties with well-defined architectures is highly important in material science, nanotechnology and bioengineering. Although two-dimensional surfaces can serve as attractive platforms, direct patterning them in solution with regular arrays remains a major challenge. Here we develop a versatile route to pattern two-dimensional free-standing surfaces in a controlled manner assisted by monomicelle close-packing assembly of block copolymers, which is unambiguously revealed by direct visual observation. This strategy allows for bottom-up patterning of polypyrrole and polyaniline with adjustable mesopores on various functional free-standing surfaces, including two-dimensional graphene, molybdenum sulfide, titania nanosheets and even on one-dimensional carbon nanotubes. As exemplified by graphene oxide-based mesoporous polypyrrole nanosheets, the unique sandwich structure with adjustable pore sizes (5–20 nm) and thickness (35–45 nm) as well as enlarged specific surface area (85 m 2 g −1) provides excellent specific capacitance and rate performance for supercapacitors. Therefore, this approach will shed light on developing solution-based soft patterning of given interfaces towards bespoke functions. 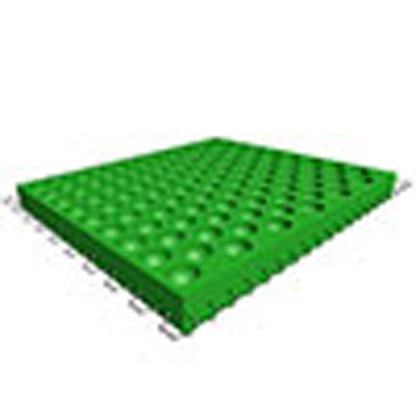 Solution-state patterning of functional materials on surfaces is important for a number of emerging technologies. Here, the authors demonstrate a bottom-up method of endowing freestanding surfaces with mesoporous conducting polymer coatings for enhanced electrochemical capacitance properties.

H L Stormer, Y. Zhang, S. Morozov … (2007)
The quantum Hall effect (QHE), one example of a quantum phenomenon that occur on a truly macroscopic scale, has been attracting intense interest since its discovery in 1980 and has helped elucidate many important aspects of quantum physics. It has also led to the establishment of a new metrological standard, the resistance quantum. Disappointingly, however, the QHE could only have been observed at liquid-helium temperatures. Here, we show that in graphene - a single atomic layer of carbon - the QHE can reliably be measured even at room temperature, which is not only surprising and inspirational but also promises QHE resistance standards becoming available to a broader community, outside a few national institutions.

Optimization of the thermoelectric figure of merit in the conducting polymer poly(3,4-ethylenedioxythiophene).

Olga Bubnova, Zia Ullah Khan, Abdellah Malti … (2011)
Thermoelectric generators (TEGs) transform a heat flow into electricity. Thermoelectric materials are being investigated for electricity production from waste heat (co-generation) and natural heat sources. For temperatures below 200 °C, the best commercially available inorganic semiconductors are bismuth telluride (Bi(2)Te(3))-based alloys, which possess a figure of merit ZT close to one. Most of the recently discovered thermoelectric materials with ZT>2 exhibit one common property, namely their low lattice thermal conductivities. Nevertheless, a high ZT value is not enough to create a viable technology platform for energy harvesting. To generate electricity from large volumes of warm fluids, heat exchangers must be functionalized with TEGs. This requires thermoelectric materials that are readily synthesized, air stable, environmentally friendly and solution processable to create patterns on large areas. Here we show that conducting polymers might be capable of meeting these demands. The accurate control of the oxidation level in poly(3,4-ethylenedioxythiophene) (PEDOT) combined with its low intrinsic thermal conductivity (λ=0.37 W m(-1) K(-1)) yields a ZT=0.25 at room temperature that approaches the values required for efficient devices. © 2011 Macmillan Publishers Limited. All rights reserved

Zhao, Feng, Huo … (1998)
Use of amphiphilic triblock copolymers to direct the organization of polymerizing silica species has resulted in the preparation of well-ordered hexagonal mesoporous silica structures (SBA-15) with uniform pore sizes up to approximately 300 angstroms. The SBA-15 materials are synthesized in acidic media to produce highly ordered, two-dimensional hexagonal (space group p6mm) silica-block copolymer mesophases. Calcination at 500 degrees C gives porous structures with unusually large interlattice d spacings of 74.5 to 320 angstroms between the (100) planes, pore sizes from 46 to 300 angstroms, pore volume fractions up to 0.85, and silica wall thicknesses of 31 to 64 angstroms. SBA-15 can be readily prepared over a wide range of uniform pore sizes and pore wall thicknesses at low temperature (35 degrees to 80 degrees C), using a variety of poly(alkylene oxide) triblock copolymers and by the addition of cosolvent organic molecules. The block copolymer species can be recovered for reuse by solvent extraction with ethanol or removed by heating at 140 degrees C for 3 hours, in both cases, yielding a product that is thermally stable in boiling water.