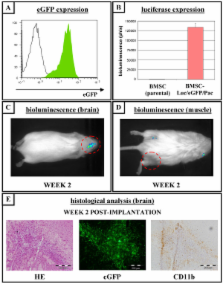 Cell transplantation is likely to become an important therapeutic tool for the treatment of various traumatic and ischemic injuries to the central nervous system (CNS). However, in many pre-clinical cell therapy studies, reporter gene-assisted imaging of cellular implants in the CNS and potential reporter gene and/or cell-based immunogenicity, still remain challenging research topics.

In this study, we performed cell implantation experiments in the CNS of immunocompetent mice using autologous (syngeneic) luciferase-expressing bone marrow-derived stromal cells (BMSC-Luc) cultured from ROSA26-L-S-L-Luciferase transgenic mice, and BMSC-Luc genetically modified using a lentivirus encoding the enhanced green fluorescence protein (eGFP) and the puromycin resistance gene (Pac) (BMSC-Luc/eGFP/Pac). Both reporter gene-modified BMSC populations displayed high engraftment capacity in the CNS of immunocompetent mice, despite potential immunogenicity of introduced reporter proteins, as demonstrated by real-time bioluminescence imaging (BLI) and histological analysis at different time-points post-implantation. In contrast, both BMSC-Luc and BMSC-Luc/eGFP/Pac did not survive upon intramuscular cell implantation, as demonstrated by real-time BLI at different time-points post-implantation. In addition, ELISPOT analysis demonstrated the induction of IFN-γ-producing CD8+ T-cells upon intramuscular cell implantation, but not upon intracerebral cell implantation, indicating that BMSC-Luc and BMSC-Luc/eGFP/Pac are immune-tolerated in the CNS. However, in our experimental transplantation model, results also indicated that reporter gene-specific immune-reactive T-cell responses were not the main contributors to the immunological rejection of BMSC-Luc or BMSC-Luc/eGFP/Pac upon intramuscular cell implantation.

We here demonstrate that reporter gene-modified BMSC derived from ROSA26-L-S-L-Luciferase transgenic mice are immune-tolerated upon implantation in the CNS of syngeneic immunocompetent mice, providing a research model for studying survival and localisation of autologous BMSC implants in the CNS by real-time BLI and/or histological analysis in the absence of immunosuppressive therapy.

Neuronal replacement from endogenous precursors in the adult brain after stroke.

Deniz Kirik,  A Arvidsson,  Zaal Kokaia … (2002)
In the adult brain, new neurons are continuously generated in the subventricular zone and dentate gyrus, but it is unknown whether these neurons can replace those lost following damage or disease. Here we show that stroke, caused by transient middle cerebral artery occlusion in adult rats, leads to a marked increase of cell proliferation in the subventricular zone. Stroke-generated new neurons, as well as neuroblasts probably already formed before the insult, migrate into the severely damaged area of the striatum, where they express markers of developing and mature, striatal medium-sized spiny neurons. Thus, stroke induces differentiation of new neurons into the phenotype of most of the neurons destroyed by the ischemic lesion. Here we show that the adult brain has the capacity for self-repair after insults causing extensive neuronal death. If the new neurons are functional and their formation can be stimulated, a novel therapeutic strategy might be developed for stroke in humans.

Darwin J Prockop,  Alexandra Peister,  Kevin F. Gibson … (2004)
For reasons that are not apparent, it has been difficult to isolate and expand the adult stem cells referred to as mesenchymal stem cells or marrow stromal cells (MSCs) from murine bone marrow. We developed a protocol that provides rapidly expanding MSCs from 5 strains of inbred mice. The MSCs obtained from 5 different strains of mice were similar to human and rat MSCs in that they expanded more rapidly if plated at very low density, formed single-cell-derived colonies, and readily differentiated into either adipocytes, chondrocytes, or mineralizing cells. However, the cells from the 5 strains differed in their media requirements for optimal growth, rates of propagation, and presence of the surface epitopes CD34, stem cell antigen-1 (Sca-1), and vascular cell adhesion molecule 1 (VCAM-1). The protocol should make it possible to undertake a large number of experiments with MSCs in transgenic mice that have previously not been possible. The differences among MSCs from different strains may explain some of the conflicting data recently published on the engraftment of mouse MSCs or other bone marrow cells into nonhematopoietic tissues.

Kazuhiko Kurozumi,  Kiminori Nakamura,  Takashi Tamiya … (2005)
Mesenchymal stem cells (MSC) were reported to ameliorate functional deficits after stroke in rats, with some of this improvement possibly resulting from the action of cytokines secreted by these cells. To enhance such cytokine effects, we previously transfected the telomerized human MSC with the BDNF gene using a fiber-mutant adenovirus vector and reported that such treatment contributed to improved ischemic recovery in a rat transient middle cerebral artery occlusion (MCAO) model. In the present study, we investigated whether other cytokines in addition to BDNF, i.e., GDNF, CNTF, or NT3, might have a similar or greater effect in this model. Rats that received MSC-BDNF (P < 0.05) or MSC-GDNF (P < 0.05) showed significantly more functional recovery as demonstrated by improved behavioral test results and reduced ischemic damage on MRI than did control rats 7 and 14 days following MCAO. On the other hand, rats that received MSC-CNTF or MSC-NT3 showed neither functional recovery nor ischemic damage reduction compared to control rats. Thus, MSC transfected with the BDNF or GDNF gene resulted in improved function and reduced ischemic damage in a rat model of MCAO. These data suggest that gene-modified cell therapy may be a useful approach for the treatment of stroke.