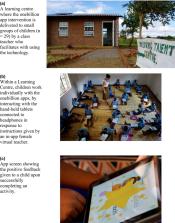 Globally, gender differences are reported in the early acquisition of reading and mathematics as girls tend to outperform boys in reading, whereas boys tend to outperform girls in mathematics. This can have long‐term impact resulting in an under‐representation of girls in Science, Technology, Engineering and Mathematics subjects. Recent research suggests that sociocultural factors account for differences across genders in the acquisition of these foundational skills. In this study, we investigated whether a new technology‐based intervention, that included activities accessible to both boys and girls, can reduce gender differences from emerging during the early primary school years. The novel instructional method used in this study employed apps developed by onebillion© delivered individually through touch‐screen tablets. Over a series of experiments conducted in Malawi, a low‐income country in sub‐Sahara Africa, we found that when children were exposed to standard pedagogical practice typical gender differences emerged over the first grade (Experiment 1). In contrast, boys and girls learnt equally well with the new interactive apps designed to support the learning of mathematics (Experiment 2) and reading (Experiment 3). When implemented at the start of primary education, before significant gender discrepancies become established, this novel technology‐based intervention can prevent significant gender effects for mathematics. These results demonstrate that different instructional practices influence the emergence of gender disparities in early mathematics. Digital interventions can mitigate gender differences in countries where standard pedagogical instruction typically hinders girls from acquiring early mathematical skills at the same rate as boys.

A video abstract of this article can be viewed at https://www.youtube.com/watch?v=55x-6hhAY9M&feature=youtu.be

Sex differences in intrinsic aptitude for mathematics and science?: a critical review.

Elizabeth S. Spelke (2005)
This article considers 3 claims that cognitive sex differences account for the differential representation of men and women in high-level careers in mathematics and science: (a) males are more focused on objects from the beginning of life and therefore are predisposed to better learning about mechanical systems; (b) males have a profile of spatial and numerical abilities producing greater aptitude for mathematics; and (c) males are more variable in their cognitive abilities and therefore predominate at the upper reaches of mathematical talent. Research on cognitive development in human infants, preschool children, and students at all levels fails to support these claims. Instead, it provides evidence that mathematical and scientific reasoning develop from a set of biologically based cognitive capacities that males and females share. These capacities lead men and women to develop equal talent for mathematics and science.

The Science of Sex Differences in Science and Mathematics.