Regulation of Ketone Body Metabolism and the Role of PPARα 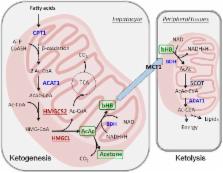 Ketogenesis and ketolysis are central metabolic processes activated during the response to fasting. Ketogenesis is regulated in multiple stages, and a nuclear receptor peroxisome proliferator activated receptor α (PPARα) is one of the key transcription factors taking part in this regulation. PPARα is an important element in the metabolic network, where it participates in signaling driven by the main nutrient sensors, such as AMP-activated protein kinase (AMPK), PPARγ coactivator 1α (PGC-1α), and mammalian (mechanistic) target of rapamycin (mTOR) and induces hormonal mediators, such as fibroblast growth factor 21 (FGF21). This work describes the regulation of ketogenesis and ketolysis in normal and malignant cells and briefly summarizes the positive effects of ketone bodies in various neuropathologic conditions.

Federico Díaz-González,  J. Seydoux,  B. Desvergne … (1999)
Prolonged deprivation of food induces dramatic changes in mammalian metabolism, including the release of large amounts of fatty acids from the adipose tissue, followed by their oxidation in the liver. The nuclear receptor known as peroxisome proliferator-activated receptor alpha (PPARalpha) was found to play a role in regulating mitochondrial and peroxisomal fatty acid oxidation, suggesting that PPARalpha may be involved in the transcriptional response to fasting. To investigate this possibility, PPARalpha-null mice were subjected to a high fat diet or to fasting, and their responses were compared with those of wild-type mice. PPARalpha-null mice chronically fed a high fat diet showed a massive accumulation of lipid in their livers. A similar phenotype was noted in PPARalpha-null mice fasted for 24 hours, who also displayed severe hypoglycemia, hypoketonemia, hypothermia, and elevated plasma free fatty acid levels, indicating a dramatic inhibition of fatty acid uptake and oxidation. It is shown that to accommodate the increased requirement for hepatic fatty acid oxidation, PPARalpha mRNA is induced during fasting in wild-type mice. The data indicate that PPARalpha plays a pivotal role in the management of energy stores during fasting. By modulating gene expression, PPARalpha stimulates hepatic fatty acid oxidation to supply substrates that can be metabolized by other tissues.

Atsuhiko Ichimura,  Gozoh Tsujimoto,  Takeshi Maeda … (2011)
The maintenance of energy homeostasis is essential for life, and its dysregulation leads to a variety of metabolic disorders. Under a fed condition, mammals use glucose as the main metabolic fuel, and short-chain fatty acids (SCFAs) produced by the colonic bacterial fermentation of dietary fiber also contribute a significant proportion of daily energy requirement. Under ketogenic conditions such as starvation and diabetes, ketone bodies produced in the liver from fatty acids are used as the main energy sources. To balance energy intake, dietary excess and starvation trigger an increase or a decrease in energy expenditure, respectively, by regulating the activity of the sympathetic nervous system (SNS). The regulation of metabolic homeostasis by glucose is well recognized; however, the roles of SCFAs and ketone bodies in maintaining energy balance remain unclear. Here, we show that SCFAs and ketone bodies directly regulate SNS activity via GPR41, a Gi/o protein-coupled receptor for SCFAs, at the level of the sympathetic ganglion. GPR41 was most abundantly expressed in sympathetic ganglia in mouse and humans. SCFA propionate promoted sympathetic outflow via GPR41. On the other hand, a ketone body, β-hydroxybutyrate, produced during starvation or diabetes, suppressed SNS activity by antagonizing GPR41. Pharmacological and siRNA experiments indicated that GPR41-mediated activation of sympathetic neurons involves Gβγ-PLCβ-MAPK signaling. Sympathetic regulation by SCFAs and ketone bodies correlated well with their respective effects on energy consumption. These findings establish that SCFAs and ketone bodies directly regulate GPR41-mediated SNS activity and thereby control body energy expenditure in maintaining metabolic homeostasis.

The PPARalpha-leukotriene B4 pathway to inflammation control.

Heather Keller,  W. Wahli,  M. Luisa Vázquez … (1996)
Inflammation is a local immune response to 'foreign' molecules, infection and injury. Leukotriene B4, a potent chemotactic agent that initiates, coordinates, sustains and amplifies the inflammatory response, is shown to be an activating ligand for the transcription factor PPARalpha. Because PPARalpha regulates the oxidative degradation of fatty acids and their derivatives, like this lipid mediator, a feedback mechanism is proposed that controls the duration of an inflammatory response and the clearance of leukotriene B4 in the liver. Thus PPARalpha offers a new route to the development of anti- or pro-inflammatory reagents.