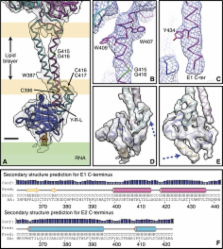 Venezuelan equine encephalitis virus (VEEV), a member of the membrane-containing Alphavirus genus, is a human and equine pathogen, and has been developed as a biological weapon. Using electron cryo-microscopy (cryo-EM), we determined the structure of an attenuated vaccine strain, TC-83, of VEEV to 4.4 Å resolution. Our density map clearly resolves regions (including E1, E2 transmembrane helices and cytoplasmic tails) that were missing in the crystal structures of domains of alphavirus subunits. These new features are implicated in the fusion, assembly and budding processes of alphaviruses. Furthermore, our map reveals the unexpected E3 protein, which is cleaved and generally thought to be absent in the mature VEEV. Our structural results suggest a mechanism for the initial stage of nucleocapsid core formation, and shed light on the virulence attenuation, host recognition and neutralizing activities of VEEV and other alphavirus pathogens.

Elodie Crublet,  Marie-Christine Vaney,  F Rey … (2010)
Chikungunya virus (CHIKV) is an emerging mosquito-borne alphavirus that has caused widespread outbreaks of debilitating human disease in the past five years. CHIKV invasion of susceptible cells is mediated by two viral glycoproteins, E1 and E2, which carry the main antigenic determinants and form an icosahedral shell at the virion surface. Glycoprotein E2, derived from furin cleavage of the p62 precursor into E3 and E2, is responsible for receptor binding, and E1 for membrane fusion. In the context of a concerted multidisciplinary effort to understand the biology of CHIKV, here we report the crystal structures of the precursor p62-E1 heterodimer and of the mature E3-E2-E1 glycoprotein complexes. The resulting atomic models allow the synthesis of a wealth of genetic, biochemical, immunological and electron microscopy data accumulated over the years on alphaviruses in general. This combination yields a detailed picture of the functional architecture of the 25 MDa alphavirus surface glycoprotein shell. Together with the accompanying report on the structure of the Sindbis virus E2-E1 heterodimer at acidic pH (ref. 3), this work also provides new insight into the acid-triggered conformational change on the virus particle and its inbuilt inhibition mechanism in the immature complex.

Dwight J. Klemm,  Jane O’Shea,  T Alber … (1991)
The x-ray crystal structure of a peptide corresponding to the leucine zipper of the yeast transcriptional activator GCN4 has been determined at 1.8 angstrom resolution. The peptide forms a parallel, two-stranded coiled coil of alpha helices packed as in the "knobs-into-holes" model proposed by Crick in 1953. Contacts between the helices include ion pairs and an extensive hydrophobic interface that contains a distinctive hydrogen bond. The conserved leucines, like the residues in the alternate hydrophobic repeat, make side-to-side interactions (as in a handshake) in every other layer of the dimer interface. The crystal structure of the GCN4 leucine zipper suggests a key role for the leucine repeat, but also shows how other features of the coiled coil contribute to dimer formation.