The Smartphone Addiction Scale: Development and Validation of a Short Version for Adolescents 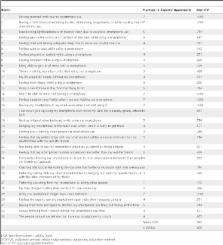 A set of questionnaires were provided to a total of 540 selected participants from April to May of 2013. The participants consisted of 343 boys and 197 girls, and their average age was 14.5 years old. The content validity was performed on a selection of shortened items, while an internal-consistency test was conducted for the verification of its reliability. The concurrent validity was confirmed using SAS, SAPS and KS-scale. Receiver operating characteristics analysis was conducted to suggest cut-off.

Development and Validation of a Smartphone Addiction Scale (SAS)

Min-Sung Kwon,  Joon-Yeop Lee,  Wang-Youn Won … (2013)
Objective The aim of this study was to develop a self-diagnostic scale that could distinguish smartphone addicts based on the Korean self-diagnostic program for Internet addiction (K-scale) and the smartphone's own features. In addition, the reliability and validity of the smartphone addiction scale (SAS) was demonstrated. Methods A total of 197 participants were selected from Nov. 2011 to Jan. 2012 to accomplish a set of questionnaires, including SAS, K-scale, modified Kimberly Young Internet addiction test (Y-scale), visual analogue scale (VAS), and substance dependence and abuse diagnosis of DSM-IV. There were 64 males and 133 females, with ages ranging from 18 to 53 years (M = 26.06; SD = 5.96). Factor analysis, internal-consistency test, t-test, ANOVA, and correlation analysis were conducted to verify the reliability and validity of SAS. Results Based on the factor analysis results, the subscale “disturbance of reality testing” was removed, and six factors were left. The internal consistency and concurrent validity of SAS were verified (Cronbach's alpha = 0.967). SAS and its subscales were significantly correlated with K-scale and Y-scale. The VAS of each factor also showed a significant correlation with each subscale. In addition, differences were found in the job (p<0.05), education (p<0.05), and self-reported smartphone addiction scores (p<0.001) in SAS. Conclusions This study developed the first scale of the smartphone addiction aspect of the diagnostic manual. This scale was proven to be relatively reliable and valid.

D Offer,  Jasie Howard,  Barbara E Ostrov (1989)
A widespread belief that adolescence is marked by disturbance may have contributed to a lack of interest in psychiatric symptomatology in adolescents. There are few studies of adolescent gender differences. Adolescents (N = 497) from three Chicago area high schools, representing a broad socioeconomic spectrum, were administered the Offer Self-Image Questionnaire, the Delinquency Checklist, and the Symptom Checklist in which they self-report on self-image, experience of symptoms, and delinquent behavior, respectively. Results show that adolescent girls are more prone to report inwardly directed psychiatric symptomatology, such as depression and anxiety, than are adolescent boys; adolescent boys are more prone to report acting out behaviorally. Gender is an important aspect of treating adolescent patients.

These authors have no support or funding to report.