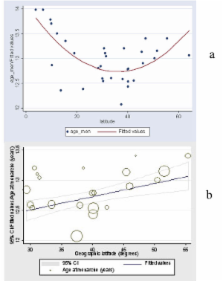 Age at menarche is considered a reliable prognostic factor for idiopathic scoliosis and varies in different geographic latitudes. Adolescent idiopathic scoliosis prevalence has also been reported to be different in various latitudes and demonstrates higher values in northern countries. A study on epidemiological reports from the literature was conducted to investigate a possible association between prevalence of adolescent idiopathic scoliosis and age at menarche among normal girls in various geographic latitudes. An attempt is also made to implicate a possible role of melatonin in the above association.

20 peer-reviewed published papers reporting adolescent idiopathic scoliosis prevalence and 33 peer-reviewed papers reporting age at menarche in normal girls from most geographic areas of the northern hemisphere were retrieved from the literature. The geographic latitude of each centre where a particular study was originated was documented. The statistical analysis included regression of the adolescent idiopathic scoliosis prevalence and age at menarche by latitude.

The regression of prevalence of adolescent idiopathic scoliosis and age at menarche by latitude is statistically significant (p < 0.001) and are following a parallel declining course of their regression curves, especially in latitudes northern than 25 degrees.

Age at menarche and racial comparisons in US girls.

John Himes,  P Lee,  Howard Kulin … (2002)
Concern regarding change in the onset of sexual maturation of US girls has increased the need for current information on age at menarche from a national sample. Previous reports have been sparse and interpretation has been limited because of the racial composition and ages of the samples. The objectives of this study were to estimate the distribution of age at menarche for all US girls and for non-Hispanic white, black, and Mexican American girls in the Third National Health and Nutrition Examination Survey and to test for racial differences. Menstrual status data were collected from 2510 girls aged 8.0 to 20.0 years. The Third National Health and Nutrition Examination Survey followed a complex, stratified, multistage probability cluster design. SUDAAN was used to calculate proportions of girls reaching menarche at an age. Ages at menarche were estimated by probit analysis at the ages at which 10%, 25%, 50%, 75%, and 90% of the girls attained menarche. Less than 10% of US girls start to menstruate before 11 years, and 90% of all US girls are menstruating by 13.75 years of age, with a median age of 12.43 years. This age at menarche is not significantly different (0.34 years earlier) than that reported for US girls in 1973. Age at menarche for non-Hispanic black girls was significantly earlier than that of white girls at 10%, 25%, and 50% of those who had attained menarche, whereas Mexican American girls were only significantly earlier than the white girls at 25%. Overall, US girls are not gaining reproductive potential earlier than in the past. The age at menarche of non-Hispanic black girls is significantly earlier than that of non-Hispanic white and Mexican American girls.

Relation of age at menarche to race, time period, and anthropometric dimensions: the Bogalusa Heart Study.

D Freedman,  L Khan,  M Serdula … (2002)
To assess secular trends in menarcheal age between 1973 and 1994 and to determine whether childhood levels of height, weight, and skinfold thicknesses can account for racial (white/black) differences in menarcheal age. Data from 7 cross-sectional examinations of school-aged children, with menarcheal age obtained through interviews, were used for both cross-sectional (11 218 observations) and longitudinal (n = 2058) analyses. In the latter analyses, the baseline examination was performed between ages 5.0 and 9.9 years, and the mean follow-up was 6 years. Black girls experienced menarche, on average, 3 months earlier than did white girls (12.3 vs 12.6 years), and during the 20-year study period, the median menarcheal age decreased by approximately 9.5 months among black girls versus approximately 2 months among white girls. As compared with 5- to 9-year-old white girls, black girls were taller and weighed more, characteristics that were predictive of a relatively early (before age 11.0 years) menarche. However, even after adjustment for weight, height, and other characteristics, the rate of early menarche remained 1.4-fold higher among black girls than among white girls. Additional study of the determinants of menarcheal age is needed, as the timing of pubertal maturation may influence the risk of various diseases in adulthood.

Sarah J Gurr,  D. Drummond,  E Rogala (1978)
A prospective study was carried out of the incidence and natural history of adolescent idiopathic scoliosis in 26,947 students. Data were obtained on 1,122 students with idiopathic scoliosis. The incidence of idiopathic scoliosis was 4.5 per cent. The female-to-male ratio was 1.25:1.0 over-all, but the ratio varied directly with the severity of the curve--that is, 1:1 for curves of 6 to 10 degrees, and 5.4:1 for curves of more than 20 degrees. Progression of the curve was determined by a two-year follow-up of 603 patients. Progression was observed in 6.8 per cent of the students and in 15.4 per cent of the skeletally immature girls with scoliosis of more than 10 degrees at the initial examination. In 20 per cent of the skeletally immature children with curves of 20 degrees at the initial examination, there was no progression. Spontaneous improvement of the curve occurred in 3 per cent and was seen more frequently in curves milder than 11 degrees. Treatment was required in 2.75 students per 1,000 screened.