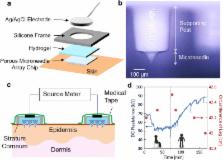 Microneedles (MNs) have been established as promising medical devices as they are minimally invasive, cause less pain, and can be utilized for self-administration of drugs by patients. There has been rapid development in MNs for transdermal monitoring and diagnostic systems, following the active research on fabrication methods and applications for drug delivery. In this paper, recent investigations on bio-sensing using MNs are reviewed in terms of the applicability to continuous glucose monitoring system (CGMS), which is one of the main research focuses of medical engineering technologies. The trend of the functionalized MNs can be categorized as follows: (i) as a sensing probe, and (ii) as a biological fluid collector. MNs as in vivo sensors are mainly integrated or coated with conductive materials to have the function as electrodes. MNs as fluid collectors are given a certain geometrical design, such as a hollow and porous structure aided by a capillary action or negative pressure, to extract the interstitial fluids or blood for ex vivo analysis. For realization of CGMS with MNs, a long-term accurate measurement by the MN-based sensing probe or a fluidic connection between the MN-based fluid collector and the existing microfluidic measurement systems should be investigated.

Mark Prausnitz (2004)
The success of transdermal drug delivery has been severely limited by the inability of most drugs to enter the skin at therapeutically useful rates. Recently, the use of micron-scale needles in increasing skin permeability has been proposed and shown to dramatically increase transdermal delivery, especially for macromolecules. Using the tools of the microelectronics industry, microneedles have been fabricated with a range of sizes, shapes and materials. Most drug delivery studies have emphasized solid microneedles, which have been shown to increase skin permeability to a broad range of molecules and nanoparticles in vitro. In vivo studies have demonstrated delivery of oligonucleotides, reduction of blood glucose level by insulin, and induction of immune responses from protein and DNA vaccines. For these studies, needle arrays have been used to pierce holes into skin to increase transport by diffusion or iontophoresis or as drug carriers that release drug into the skin from a microneedle surface coating. Hollow microneedles have also been developed and shown to microinject insulin to diabetic rats. To address practical applications of microneedles, the ratio of microneedle fracture force to skin insertion force (i.e. margin of safety) was found to be optimal for needles with small tip radius and large wall thickness. Microneedles inserted into the skin of human subjects were reported as painless. Together, these results suggest that microneedles represent a promising technology to deliver therapeutic compounds into the skin for a range of possible applications.

Jung-Hwan Park, Mark Allen, Mark Prausnitz (2005)
To overcome the skin's barrier properties that block transdermal delivery of most drugs, arrays of microscopic needles have been microfabricated primarily out of silicon or metal. This study addresses microneedles made of biocompatible and biodegradable polymers, which are expected to improve safety and manufacturability. To make biodegradable polymer microneedles with sharp tips, micro-electromechanical masking and etching were adapted to produce beveled- and chisel-tip microneedles and a new fabrication method was developed to produce tapered-cone microneedles using an in situ lens-based lithographic approach. To replicate microfabricated master structures, PDMS micromolds were generated and a novel vacuum-based method was developed to fill the molds with polylactic acid, polyglycolic acid, and their co-polymers. Mechanical testing of the resulting needles measured the force at which needles broke during axial loading and found that this failure force increased with Young's modulus of the material and needle base diameter and decreased with needle length. Failure forces were generally much larger than the forces needed to insert microneedles into skin, indicating that biodegradable polymers can have satisfactory mechanical properties for microneedles. Finally, arrays of polymer microneedles were shown to increase permeability of human cadaver skin to a low-molecular weight tracer, calcein, and a macromolecular protein, bovine serum albumin, by up to three orders of magnitude. Altogether, these results indicate that biodegradable polymer microneedles can be fabricated with an appropriate geometry and sufficient strength to insert into skin, and thereby dramatically increase transdermal transport of molecules.