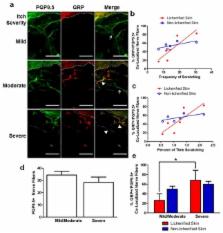 Journal: The Journal of investigative dermatology

Bookmark
There is no author summary for this article yet. Authors can add summaries to their articles on ScienceOpen to make them more accessible to a non-specialist audience.
To the Editor Chronic pruritus affects millions of patients worldwide and has a significant impact on quality of life similar to that of chronic pain (Kini et al., 2011; Stander et al., 2007). Significant advances have been made in the last five years to elucidate the molecular pathways of acute itch (Liu et al., 2009; Sun and Chen, 2007). However, experimental approaches investigating the pathogenesis of pruritus and the ability to test novel therapeutic agents are largely limited to rodent models. Although these models offer some advantages, their translational potential to human disease remains to be established (Seok et al., 2013; Jeffry et al., 2011). Furthermore, most animal models focus on acute itch, which displays significant pathophysiological differences in comparison with chronic itch (Yosipovitch et al., 2007). Therefore, there is an unmet need for better animal models for chronic itch research. Recently, gastrin-releasing peptide (GRP) and its receptor (GRPR) were discovered to play a key role in itch transmission, but not in nociception (Sun and Chen, 2007). GRP was found in a subset of unmyelinated dorsal root ganglion (DRG) neurons, while GRPR was expressed in lamina I of the dorsal horn of the spinal cord in mice. In the skin, GRP is present in primary afferent nerve fibers and found to be increased in mice with chronic dermatitis (Tominaga et al., 2009). The GRP/GRPR signaling pathway is considered to be the first molecular pathway specific to itch transmission, but there is no evidence that this pathway has an analogous role in primates or humans. We identified a subgroup of adult female Cynomolgus macaques (Macaca fascicularis) suffering from idiopathic chronic itch and observed their scratching behaviors twice every week for 10 minutes for four years using a focal observation technique (Altmann, 1974). The population pattern of GRP and GRPR expression in the skin and spinal cord were assessed in a blinded manner, respectively. The expression of GRP and GRPR was quantified by immunohistochemistry and analyzed with a 1-way ANOVA and Bonferroni post hoc test, while an Unpaired t-test was use to compare the amount of PGP9.5+ never fibers between groups. The scratching behavior of each animal was then analyzed for potential correlations with GRP and GRPR expression levels using a 2-tailed Spearman correlation test and linear regression. The frequency (number of scratching episodes per hour) and duration (percent time of scratching during focal observation) of scratching were recorded over four years, totaling 68 hours of observation per animal. The animals were euthanized and histological sections from six randomly selected animals with different itch severities were collected. For each primate, the total count of nerve fibers expressing GRP in lichenified (chronically damaged skin lesion) and non-lichenified skin from thoracic dermatomes were correlated with itch severity. Skin cryosections (20 μm thickness) were double stained with antibodies for GRP (Immunostar, Hudson, WI) and the neuronal marker Product Gene Protein 9.5 (PGP9.5; Neuromics, Edina, MN) to examine the amount of co-localization at the dermal-epidermal junction. Although fibers were found in both the epidermis and dermis, they were mainly present in the dermal-epidermal junction so all quantification was focused on this area. The population of GRPR expressing cells in the dorsal horn of the thoracic spinal cord of the same animals was also analyzed for a potential correlation to itch intensity by staining the spinal cord cryosections with the GRPR antibody (MBL International, Woburn, MA). For a detailed methods section, see supplementary information. Primates that exhibited a comparatively higher severity of itching consistently displayed an increased percentage of GRP expressing nerve fibers at the dermal-epidermal junction of lichenified skin (p=0.03; Figure 1a & e). The mean percentage of GRP+/PGP9.5+ fibers was 4.8 fold higher in primates exhibiting the highest itch intensity than in primates with the lowest intensity. The frequency (Figure 1b) and duration (Figure 1c) of scratching were significantly correlated with the percentage of GRP in lichenified skin (r=0.94, p=0.02; for both frequency and duration), but not in non-lichenified skin (r=0.77, p=0.10; for both frequency and duration). The innervation pattern of PGP9.5+ fibers in the skin show no significant difference of fibers in animals with severe itch compared to those with mild/moderate itch (Figure 1d). Additionally, an increased of amount GRPR expressing cells was observed in the dorsal horn of the spinal cord of primates exhibiting a higher itch severity compared to animals with lower itch severity (p=0.002; Figure 2a & d). The frequency (Figure 2b) and duration (Figure 2c) of scratching was also found to be significantly correlated with the expression of GRPR in the superficial lamina I & II (r=0.94, p=0.02; for both frequency and duration), but only trended toward significance in the deep lamina III–V (r=0.83, p=0.06; for both frequency and duration) of the dorsal horn of the thoracic spinal cord. The number of GRP+ fibers in lichenified skin also significantly correlated to the amount of staining of GRPR in the superficial (r=0.94, p=0.01) and deep (r=0.89, p=0.03) lamina of the dorsal horn of each primate (Fig. 2e). GRPR and its ligand GRP are highly expressed in the spinal cord and skin of primates with chronic itch, which to our knowledge is previously unreported. It is consistent with previous finding in non-chronic itch mice models (Andoh et al., 2011; Sun and Chen, 2007; Sun et al., 2009). Therefore, the GRP/GRPR system is a promising drug target for the treatment of chronic pruritus in humans. Furthermore, this subset of female Cynomolgus macaques offers a novel model of itch that could better represent chronic itch in humans. This would allow for long term follow up studies assessing other mediators involved in chronic itch.

Clinical classification of itch: a position paper of the International Forum for the Study of Itch.

T Luger,  Ulf Darsow,  Uwe Gieler … (2006)
Chronic itch is a common and distressing symptom that arises from a variety of skin conditions and systemic diseases. Despite this, there is no clinically based classification of pruritic diseases to assist in the diagnosis and cost-effective medical care of patients with pruritus. The proposed classification focuses on clinical signs and distinguishes between diseases with and without primary or secondary skin lesions. Three groups of conditions are proposed: pruritus on diseased (inflamed) skin (group I), pruritus on non-diseased (non-inflamed) skin (group II), and pruritus presenting with severe chronic secondary scratch lesions, such as prurigo nodularis (group III). The next part classifies the underlying diseases according to different categories: dermatological diseases, systemic diseases including diseases of pregnancy and drug-induced pruritus, neurological and psychiatric diseases. In some patients more than one cause may account for pruritus (category "mixed") while in others no underlying disease can be identified (category "others"). This is the first version of a clinical classification worked out by the members of the International Forum for the Study of Itch. It is intended to serve as a diagnostic route for better evaluation of patients with chronic pruritus and aims to improve patients' care.

The impact of pruritus on quality of life: the skin equivalent of pain.