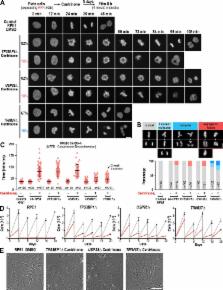 Meitinger et al. perform a genome-wide CRISPR/Cas9 screen for centrinone resistance and identify a 53BP1-USP28 module as critical for communicating mitotic challenges to the p53 circuit and TRIM37 as an enforcer of the singularity of centrosome assembly.

In normal human cells, centrosome loss induced by centrinone—a specific centrosome duplication inhibitor—leads to irreversible, p53-dependent G1 arrest by an unknown mechanism. A genome-wide CRISPR/Cas9 screen for centrinone resistance identified genes encoding the p53-binding protein 53BP1, the deubiquitinase USP28, and the ubiquitin ligase TRIM37. Deletion of TP53BP1, USP28, or TRIM37 prevented p53 elevation in response to centrosome loss but did not affect cytokinesis failure–induced arrest or p53 elevation after doxorubicin-induced DNA damage. Deletion of TP53BP1 and USP28, but not TRIM37, prevented growth arrest in response to prolonged mitotic duration. TRIM37 knockout cells formed ectopic centrosomal-component foci that suppressed mitotic defects associated with centrosome loss. TP53BP1 and USP28 knockouts exhibited compromised proliferation after centrosome removal, suggesting that centrosome-independent proliferation is not conferred solely by the inability to sense centrosome loss. Thus, analysis of centrinone resistance identified a 53BP1-USP28 module as critical for communicating mitotic challenges to the p53 circuit and TRIM37 as an enforcer of the singularity of centrosome assembly.

The first 30 years of p53: growing ever more complex.

Moshe Oren,  Keith E Levine (2009)
Thirty years ago p53 was discovered as a cellular partner of simian virus 40 large T-antigen, the oncoprotein of this tumour virus. The first decade of p53 research saw the cloning of p53 DNA and the realization that p53 is not an oncogene but a tumour suppressor that is very frequently mutated in human cancer. In the second decade of research, the function of p53 was uncovered: it is a transcription factor induced by stress, which can promote cell cycle arrest, apoptosis and senescence. In the third decade after its discovery new functions of this protein were revealed, including the regulation of metabolic pathways and cytokines that are required for embryo implantation. The fourth decade of research may see new p53-based drugs to treat cancer. What is next is anybody's guess.

Paul T. Conduit,  Alan Wainman,  Jordan W. Raff (2015)
It has become clear that the role of centrosomes extends well beyond that of important microtubule organizers. There is increasing evidence that they also function as coordination centres in eukaryotic cells, at which specific cytoplasmic proteins interact at high concentrations and important cell decisions are made. Accordingly, hundreds of proteins are concentrated at centrosomes, including cell cycle regulators, checkpoint proteins and signalling molecules. Nevertheless, several observations have raised the question of whether centrosomes are essential for many cell processes. Recent findings have shed light on the functions of centrosomes in animal cells and on the molecular mechanisms of centrosome assembly, in particular during mitosis. These advances should ultimately allow the in vitro reconstitution of functional centrosomes from their component proteins to unlock the secrets of these enigmatic organelles.

Assembly of centrosomal proteins and microtubule organization depends on PCM-1

Alexander Dammermann,  Andreas Merdes (2002)
The protein PCM-1 localizes to cytoplasmic granules known as “centriolar satellites” that are partly enriched around the centrosome. We inhibited PCM-1 function using a variety of approaches: microinjection of antibodies into cultured cells, overexpression of a PCM-1 deletion mutant, and specific depletion of PCM-1 by siRNA. All approaches led to reduced targeting of centrin, pericentrin, and ninein to the centrosome. Similar effects were seen upon inhibition of dynactin by dynamitin, and after prolonged treatment of cells with the microtubule inhibitor nocodazole. Inhibition or depletion of PCM-1 function further disrupted the radial organization of microtubules without affecting microtubule nucleation. Loss of microtubule organization was also observed after centrin or ninein depletion. Our data suggest that PCM-1–containing centriolar satellites are involved in the microtubule- and dynactin-dependent recruitment of proteins to the centrosome, of which centrin and ninein are required for interphase microtubule organization.