Prereduction traction for the prevention of avascular necrosis before closed reduction for developmental dysplasia of the hip: a meta-analysis 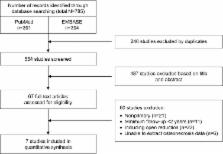 Avascular necrosis (AVN) is one of the common complications after closed reduction and hip spica cast for developmental dysplasia of the hip (DDH). Prereduction traction has been used to reduce a dislocated hip or decrease the risk of AVN, but there are conflicting results in prevention effects on AVN. The purpose of this study was to systematically review the current literature and evaluate the effect of prereduction traction in preventing AVN in children with DDH treated by closed reduction through a meta-analysis.

A systematic review of the literature was performed using PubMed and EMBASE with variations of three major terms: 1) hip dislocation; 2) closed reduction; and 3) avascular necrosis. Seven studies that could compare the incidence of AVN between the traction and no-traction group were included. Methodological quality was assessed, a heterogeneity test was done ( p=0.008), and the pooled risk ratios were estimated.

There was insufficient evidence to decide the efficacy of prereduction traction before closed reduction in reducing the risk of AVN in patients with DDH in this meta-analysis. To recommend prereduction traction for the prevention of AVN, long-term follow-up studies considering age, severity of dislocation, and appropriate traction method are needed.

Avascular necrosis of the femoral head as a complication of treatment for congenital dislocation of the hip in young children: a clinical and experimental investigation.

Closed reduction for congenital dysplasia of the hip. Functional and radiographic results after an average of thirty years.

Robert Weinstein,  T Malvitz (1994)
The functional and radiographic results of closed reduction in 152 congenitally dislocated hips of 119 patients who had been managed between 1938 and 1969 were reviewed retrospectively. The average age of the patients at the time of the reduction was twenty-one months (range, one to ninety-six months). At the time of the latest follow-up evaluation, the average age was thirty-one years (range, sixteen to fifty-six years). The average duration of follow-up was thirty years (range, fifteen to fifty-three years). At the latest follow-up evaluation, the Iowa hip rating averaged 91 points (range, 38 to 100 points) and the Harris hip score averaged 90 points (range, 33 to 100 points). Thirty-five hips were rated Severin Class I; thirty-five, Class II; twenty-eight, Class III; fifty-three, Class IV; and one, Class VI. Disturbance of growth in the proximal end of the femur occurred in ninety-one hips (60 per cent). Eight contralateral hips that had appeared normal also demonstrated disturbance of proximal femoral growth. In many hips, partial physeal arrest could not be determined for ten to twelve years after the reduction. Seventeen hips (twelve patients) had a total replacement when the patients were an average age of thirty-six years (range, nineteen to fifty-three years). Sixty-five hips (43 per cent) had radiographic evidence of degenerative joint disease. Patients who did not have a growth disturbance of the proximal end of the femur or evidence of subluxation tended to function extremely well for many years despite a radiographic result that was less than anatomical. Function tended to deteriorate with time, even in the absence of disturbance of growth in the proximal end of the femur. Despite generally good function at the latest follow-up evaluation, the prognosis for these patients remained guarded.

Post-reduction avascular necrosis in congenital dislocation of the hip.

R Wallensten,  Ross D. Cooperman,  S D Stulberg (1980)
Twenty-five patients with thirty congenitally dislocated hips in which avascular necrosis developed after closed reduction were followed for an average of thirty-nine years from the time of reduction. Twenty-four of the thirty hips had moderate or severe osteoarthritis and twenty-two of the twenty-five patients had significant pain or loss of function, or both, by the time they were forty-two years old, The deformities produced by avascular necrosis that were related to osteoarthritis included: (1) loss of sphericity of the femoral head, (2) persistent lateral and proximal subluxation, (3) irregularity of the medial part of the femoral head, and (4) acetabular dysplasia. The study suggests that if avascular necrosis develops following closed reduction of a congenitally dislocated hip, attempts should be made to prevent lateral and proximal subluxation of the femoral head and to correct thse abnormalities, if possible, once they occur.