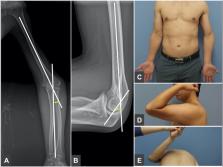 Cubitus varus is a common triplane deformity in adults associated with supracondylar humeral fractures experienced as a child and consists of varus, extension, and internal rotation components. When corrective osteotomy is indicated, these three components should be measured precisely. This study aimed to evaluate the accuracy of radiographic and physical measurements of cubitus varus deformities in adults compared to values measured on three-dimensional (3-D) bone surface models of the adult bilateral humerus.

Three-dimensional bilateral humerus models were developed using bilateral humerus CT images of 20 adult patients with cubitus varus. The varus, internal rotation, and extension components of the deformity were assessed by superimposing the 3-D bone model onto a mirror-image model of the contralateral normal humerus. Values obtained from the radiographic and physical measurements were compared with those from the 3D model. The reliability of each measurement was assessed by calculating correlation coefficients (CCs).

Varus and extension components of cubitus varus in adults can be reliably measured using conventional methods, whereas ﻿the internal rotation component cannot. Thus, 3-D methods with which to quantify the rotational component preoperatively might be needed when the correction of a rotational deformity is considered.

Posterolateral rotatory instability of the elbow.

Jimmy Bell,  Shawn O'Driscoll,  B Morrey (1991)
Recurrent posterolateral rotatory instability of the elbow is an apparently undescribed clinical condition that is difficult to diagnose. We treated five patients, ranging in age from five to forty years, who had such a lesion and in whom the instability could be demonstrated only by what we call the posterolateral rotatory-instability test. This test involves supination of the forearm and application of a valgus moment and an axial compression force to the elbow while it is flexed from full extension. The elbow is reduced in full extension and must be subluxated as it is flexed in order to obtain a positive test result (a sudden reduction of the subluxation). Flexion of more than about 40 degrees produces a sudden palpable and visible reduction of the radiohumeral joint. The elbow does not subluxate without provocation. The cause for this condition, we think, is laxity of the ulnar part of the lateral collateral ligament, which allows a transient rotatory subluxation of the ulnohumeral joint and a secondary dislocation of the radiohumeral joint. The annular ligament remains intact, so the radio-ulnar joint does not dislocate. Operative repair of the lax ulnar part of the lateral collateral ligament eliminated the posterolateral rotatory instability, as revealed intraoperatively in our five patients.

Tardy posterolateral rotatory instability of the elbow due to cubitus varus.

W Kibler,  H Kato,  Shawn O'Driscoll … (2001)
Cubitus varus has long been considered merely a cosmetic deformity. The purpose of this paper is to demonstrate a causal relationship between cubitus varus and instability of the elbow. In twenty-four patients (twenty-five limbs) with a cubitus varus deformity following a pediatric distal humeral fracture or resulting from a congenital anomaly (three limbs of two patients), tardy posterolateral rotatory instability of the elbow developed approximately two to three decades after the deformity occurred. All patients presented with lateral elbow pain and recurrent instability. The average varus deformity was 15 degrees (range, 0 degrees to 35 degrees ). Surgery was performed in twenty-one patients (twenty-two limbs). Treatment consisted of reconstruction of the lateral collateral ligament and osteotomy in seven limbs, ligament reconstruction alone in ten, osteotomy alone in four, and total elbow arthroplasty in one. In three patients, the triceps muscle was dynamically stimulated intraoperatively to contract while resisting extension of the elbow. This produced posterolateral rotatory subluxation of the elbow, which was reversed by corrective osteotomy and lateral transposition of a portion of the medial head of the triceps that originally had been attached to the elongated, deformed medial aspect of the olecranon. At an average of three years (minimum, one year) after the operation, the result was good or excellent for nineteen of the twenty-two limbs that had undergone an operation; three limbs had persistent instability. With cubitus varus, the mechanical axis, the olecranon, and the triceps line of pull are all displaced medially. The repetitive external rotation torque on the ulna permitted by these deformities can stretch the lateral collateral ligament complex and lead to posterolateral rotatory instability. Thus, cubitus varus deformity secondary to supracondylar malunion or congenital deformity of the distal part of the humerus may not always be a benign condition and may have important long-term clinical implications. Operative correction can relieve symptoms of instability. The indications for preventive corrective osteotomy remain to be determined.

Yukari Takeyasu,  Tsuyoshi Murase,  Hisao Moritomo … (2013)
Cubitus varus deformity after a supracondylar fracture classically includes varus, extension, and internal rotation components. However, to our knowledge, no reliable surgical method for three-dimensional corrective osteotomy has been established. We developed an intraoperative guide system involving a custom-made surgical template designed on the basis of a three-dimensional computer simulation incorporating computed tomography (CT) data. We aimed to investigate the feasibility of this novel technique for correcting cubitus varus deformity. Thirty consecutive patients (twenty-three males and seven females) with a cubitus varus deformity resulting from the malunion of a distal humeral supracondylar fracture were included in this study. Between October 2003 and May 2011, the patients underwent a three-dimensional corrective osteotomy with use of a custom-made surgical template. The patients were then followed for a minimum of twelve months. We evaluated radiographic parameters, including the humerus-elbow-wrist angle and tilting angle, as well as the ranges of motion of the elbow and shoulder at the time of the most recent follow-up. An overall clinical evaluation was performed. Bone union was achieved at a mean of four months after surgery. The mean humerus-elbow-wrist angle and tilting angle on the affected side improved significantly from 18.2° (varus) and 25.0°, respectively, before surgery, to 5.8° (valgus) and 38.0°, respectively, after surgery. Hyperextension of the elbow and internal rotation of the shoulder were normalized in all patients. Early plate breakage was observed in one patient. One patient had mild recurrence of varus deformity. Twenty-seven patients had an excellent result, three had a good result, and none had a poor result. Three-dimensional corrective osteotomy with the use of a custom-made surgical template that is designed and produced on the basis of computer simulation is a feasible and useful treatment option for cubitus varus deformity.