New developments in the genetics, pathogenesis, and therapy of IgA nephropathy 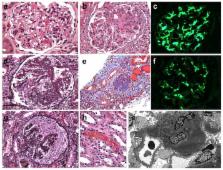 Recent years have brought notable progress in the field of IgA nephropathy. Here, we highlight important new directions and latest developments, including successful discovery of several genetic susceptibility loci, formulation of the multi-hit pathogenesis model that integrates findings from studies of galactose-deficient IgA1, anti-glycan response and immune complex-induced kidney injury, introduction of the Oxford pathology scoring system, and formalization of the Kidney Disease Improving Global Outcomes (KDIGO) consensus treatment guidelines. We focus on the latest genetic findings that confirm a strong contribution of inherited factors and explain some of the geo-ethnic disparities in disease susceptibility. Most IgA nephropathy susceptibility loci discovered to date encode genes involved in the maintenance of the intestinal epithelial barrier and response to mucosal pathogens. The concerted pattern of inter-population allelic differentiation across all Genome Wide Association Studies (GWAS) loci parallels the disease prevalence and correlates with variation in local pathogens, suggesting that multi-locus adaptation might have shaped the present-day landscape of IgA nephropathy. Importantly, the “Intestinal Immune Network for IgA Production” emerged as one of the new targets for potential therapeutic intervention. We place these findings in the context of the multi-hit pathogenesis model and existing knowledge of IgA immunobiology. Lastly, we provide our perspective on the existing treatment options, discuss areas of clinical uncertainty, and outline ongoing clinical trials and translational studies.

Robert Graham,  L. Lorand (2003)
Blood coagulation, skin-barrier formation, hardening of the fertilization envelope, extracellular-matrix assembly and other important biological processes are dependent on the rapid generation of covalent crosslinks between proteins. These reactions--which are catalysed by transglutaminases--endow the resulting supramolecular structure with extra rigidity and resistance against proteolytic degradation. Some transglutaminases function as molecular switches in cytoskeletal scaffolding and modulate protein-protein interactions. Having knowledge of these enzymes is essential for understanding the aetiologies of diverse hereditary diseases of the blood and skin, and various autoimmune, inflammatory and degenerative conditions.

Hiroshi Kiyono,  Sung-Jae Jung,  Masayuki Miyasaka … (2008)
The intestinal cell types responsible for defense against pathogenic organisms remain incompletely characterized. Here we identify a subset of CD11c(hi)CD11b(hi) lamina propria dendritic cells (LPDCs) that expressed Toll-like receptor 5 (TLR5) in the small intestine. When stimulated by the TLR5 ligand flagellin, TLR5(+) LPDCs induced the differentiation of naive B cells into immunoglobulin A-producing plasma cells by a mechanism independent of gut-associated lymphoid tissue. In addition, by a mechanism dependent on TLR5 stimulation, these LPDCs promoted the differentiation of antigen-specific interleukin 17-producing T helper cells and type 1 T helper cells. Unlike spleen DCs, the LPDCs specifically produced retinoic acid, which, in a dose-dependent way, supported the generation and retention of immunoglobulin A-producing cells in the lamina propria and positively regulated the differentiation interleukin 17-producing T helper cells. Our findings demonstrate unique properties of LPDCs and the importance of TLR5 for adaptive immunity in the intestine.