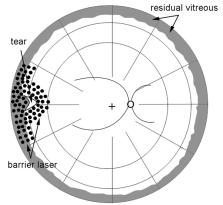 To investigate the efficacy of fortified barrier laser (FBL) on the vitreous base in vitrectomy for rhegmatogenous retinal detachment (RRD).

This was a retrospective study of patients who underwent vitrectomy for RRD without proliferative vitreoretinopathy. Barrier laser was applied as 3–4 rows surrounding the break at the end of fluid-air exchange. For the FBL, 3–4 rows of laser burn were additionally made about 0.5 clock-hour long adjacent to the break along the posterior border of the vitreous base. The primary outcome was single surgery success rate (SSSR) between two groups: FBL and conventional barrier laser (CBL) groups.

FBL on the vitreous base was efficacious in improving the anatomical success rate of vitrectomy.

Primary vitrectomy for rhegmatogenous retinal detachment: an analysis of 512 cases.

Norbert Bornfeld,  X Zou,  Horst Helbig … (2005)
Primary pars plana vitrectomy (PPPV) has gained widespread popularity in the treatment of rhegmatogenous retinal detachments (RRD). However, the surgical procedure is still flawed by a significant rate of anatomical and functional failures. The study was conducted to analyse the risk factors for a dissatisfying postoperative outcome. We carried out a retrospective study of 512 cases of PPPV with a minimum follow-up of 3 months from one institution over a 9-year period. Preoperatively, 24.8% of patients (127 out of 512) were pseudophakic, 16.4% (84 out of 512) highly myopic, 19.9% (102 out of 512) had preoperative proliferative vitreoretinopathy (PVR) and 14.6% (75 out of 512) had vitreous haemorrhage. The follow-up period ranged from 3 to 108 months (median 14.8). Retinal reattachment was achieved with one operation in 70.7% (362 out of 512) and after one or more operations in 97.5% of cases (499 out of 512). The major reasons for redetachments were new retinal breaks, followed by a combination of new breaks and PVR, and PVR without apparent breaks. Postoperative visual acuities of > or =0.1 and > or =0.4 were achieved in 82.8% (424 out of 512) and 48.2% (247 out of 512) respectively. Out of 376 phakic patients at study entry, 66.4% (250 out of 376) underwent cataract surgery either in combination with PPPV or during the postoperative course. Factors that were significantly associated with either anatomical or functional failure included duration of symptoms, low preoperative visual acuity, myopia, amblyopia, hypotony, macular detachment, preoperative PVR, extent of detachment, involvement of inferior quadrants, no detectable breaks, large breaks, breaks posterior to the equator, surgeon, level of surgical training, endocryotherapy, and combined scleral buckling surgery. Primary pars plana vitrectomy is still flawed by a relatively high primary redetachment rate following the initial procedure. The advantages of the technique are a high final reattachment rate and relatively good functional results in a subset of patients with more complicated types of RRD. The risk factors for postoperative failures following PPPV for RRD match to a large extent those following scleral buckling surgery (SBS). Future improvements of the technique will have to focus on modifiable risk factors, such as details of the surgical procedures, surgical training and case selection, to distinguish it from SBS.