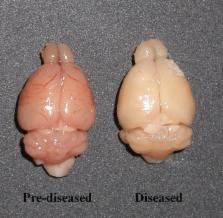 Purpose: Systemic Lupus Erythematosus (SLE) is an autoimmune disease which is characterised by elevated levels of autoantibodies and cytokines in the body. Via alteration of the regulation of inflammation, damage to different organ systems, including the central nervous system (CNS), was found in SLE patients. Patients diagnosed with SLE were reported to suffer from different kinds of psychiatric signs and symptoms. As neurogenesis has been suggested to be a potential key player of psychiatric symptoms and emotional behavior disturbances, this study aims to investigate whether neurogenesis is altered in an animal model of SLE. Also, neuroinflammation was studied.

Methods: Female NZB/W F1 mice were used as an animal model of SLE. Animals were divided into two groups: 1. pre-diseased mice (lupus-prone NZB/W F1 female mice, age 10–15 weeks, negative for proteinuria and with basal levels of serum anti-dsDNA autoantibodies) and 2. diseased mice (NZB/W F1 female mice, > 25 weeks of age, with elevated serum levels of anti-dsDNA autoantibodies and with persistent proteinuria of > 3 mg/ml for more than 2 weeks). Comparisons of the levels of neurogenesis and neuroinflammtion between two groups of mice were studied by the immunohistochemistry.

Results: After the onset of SLE symptoms, a reduction of neurogenesis in the hippocampus was found, while there was a dramatic increase of doublecortin (DCX+) neuronal precursor cells in the corpus callosum (CC) and in the subventricular zone (SVZ). Meanwhile, exacerbated inflammation was present in the corpus callosum of the diseased mice, which was suggested by the increased number of GFAP+ cells and IBA-1+ cells.

Conclusions: To the best of our knowledge, this is the first study showing an increase of neuronal precursor cells in the corpus callosum of the female NZB/W F1 mice. The present study suggests a coincidence but not a causal relationship between neurogenesis and neuroinflammation. The present results have also provided new insight showing that the altered neurogenesis and neuroinflammation may be a potential neurological mechanism for the cognitive and mood disturbance found in the SLE patients.

A critical period for enhanced synaptic plasticity in newly generated neurons of the adult brain.

Arturo Alvarez,  C Lois,  Luis A J Alvarez (1994)
During the development of the mammalian brain, neuronal precursors migrate to their final destination from their site of birth in the ventricular and subventricular zones (VZ and SVZ, respectively). SVZ cells in the walls of the lateral ventricle continue to proliferate in the brain of adult mice and can generate neurons in vitro, but their fate in vivo is unknown. Here SVZ cells from adult mice that carry a neuronal-specific transgene were grafted into the brain of adult recipients. In addition, the fate of endogenous SVZ cells was examined by microinjection of tritiated thymidine or a vital dye that labeled a discrete population of SVZ cells. Grafted and endogenous SVZ cells in the lateral ventricle of adult mice migrate long distances and differentiate into neurons in the olfactory bulb.