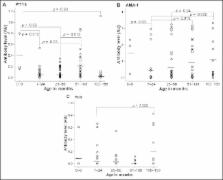 The analysis of immune responses in diverse malaria endemic regions provides more information to understand the host’s immune response to Plasmodium falciparum. Several plasmodial antigens have been reported as targets of human immunity. PfAMA1 is one of most studied vaccine candidates; PfRH5 and Pf113 are new promising vaccine candidates. The aim of this study was to evaluate humoral response against these three antigens among children of Lastourville (rural area) and Franceville (urban area). Malaria was diagnosed using rapid diagnosis tests. Plasma samples were tested against these antigens by enzyme-linked immunosorbent assay (ELISA). We found that malaria prevalence was five times higher in the rural area than in the urban area ( p < 0.0001). The anti-PfAMA1 and PfRh5 response levels were significantly higher in Lastourville than in Franceville ( p < 0.0001; p = 0.005). The anti-AMA1 response was higher than the anti-Pf113 response, which in turn was higher than the anti-PfRh5 response in both sites. Anti-PfAMA1 levels were significantly higher in infected children than those in uninfected children ( p = 0.001) in Franceville. Anti-Pf113 and anti-PfRh5 antibody levels were lowest in children presenting severe malarial anemia. These three antigens are targets of immunity in Gabon. Further studies on the role of Pf113 in antimalarial protection against severe anemia are needed.

A field trial to assess a blood-stage malaria vaccine.

Immunoglobulin G subclass-specific responses against Plasmodium falciparum merozoite antigens are associated with control of parasitemia and protection from symptomatic illness.

Stephen M Richards,  C. Anders,  Paul Gilson … (2009)
Substantial evidence indicates that antibodies to Plasmodium falciparum merozoite antigens play a role in protection from malaria, although the precise targets and mechanisms mediating immunity remain unclear. Different malaria antigens induce distinct immunoglobulin G (IgG) subclass responses, but the importance of different responses in protective immunity from malaria is not known and the factors determining subclass responses in vivo are poorly understood. We examined IgG and IgG subclass responses to the merozoite antigens MSP1-19 (the 19-kDa C-terminal region of merozoite surface protein 1), MSP2 (merozoite surface protein 2), and AMA-1 (apical membrane antigen 1), including different polymorphic variants of these antigens, in a longitudinal cohort of children in Papua New Guinea. IgG1 and IgG3 were the predominant subclasses of antibodies to each antigen, and all antibody responses increased in association with age and exposure without evidence of increasing polarization toward one subclass. The profiles of IgG subclasses differed somewhat for different alleles of MSP2 but not for different variants of AMA-1. Individuals did not appear to have a propensity to make a specific subclass response irrespective of the antigen. Instead, data suggest that subclass responses to each antigen are generated independently among individuals and that antigen properties, rather than host factors, are the major determinants of IgG subclass responses. High levels of AMA-1-specific IgG3 and MSP1-19-specific IgG1 were strongly predictive of a reduced risk of symptomatic malaria and high-density P. falciparum infections. However, no antibody response was significantly associated with protection from parasitization per se. Our findings have major implications for understanding human immunity and for malaria vaccine development and evaluation.

+ These authors contributed equally to the article.