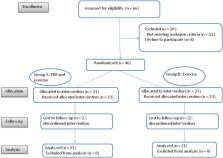 Few papers have studied the objective effects of PRP on cartilage. In this study, we investigated the effect of PRP on cartilage characteristics by special MRI sequencing in knee osteoarthritis (IRCT registration number: 2014020413442N6).

In this double blind randomized clinical trial, patients with bilateral knees osteoarthritis-grade 1, 2, and 3 were included in the study. Each patient's knees were randomly allocated to either control or treatment groups. PRP was injected in two sessions with 4 week intervals in PRP group. The VAS (visual analog scale) and WOMAC (Western Ontario and McMaster Universities Arthritis Index) were utilized and MRI was performed for all patients, before, and 8 months after treatment. The MRI sequences taken were transverse 3D TRUFISP and coronal and sagittal fat saturated proton-density. Imaging was scored according to four cartilage characteristics.

46 knees (from 23 patients) were included in this study. 23 knees in the case group and 23 knees in control group were studied. All patients were female with mean age of 57.57±5.9 years. Mean total WOMAC and VAS changes before and after treatment in control group were 11.61±8.5 and 1.3±1.1 respectively. In PRP group, mean total WOMAC and VAS changes showed better improvement with 20±12.3 and 3.2±1.6 respectively (P-value <0.05). In PRP group, all of the radiologic variables (patellofemoral cartilage volume, synovitis and medial and lateral meniscal disintegrity), with the exception of subarticular bone marrow abnormality, had significant improvement (P-value <0.05). In a comparison between the two groups, patellofemoral cartilage volume and synovitis had significantly changed in the PRP group (P-value <0.05).

In this study, in addition to the effect of PRP on VAS and WOMAC, there was a significant effect on radiologic characteristics (patellofemoral cartilage volume and synovitis). For further evaluation, a longer study with a larger sample size is recommended.

H Genant,  Haddy K. S. Fye,  Y Miaux … (2004)
To describe a semi-quantitative scoring method for multi-feature, whole-organ evaluation of the knee in osteoarthritis (OA) based on magnetic resonance imaging (MRI) findings. To determine the inter-observer agreement of this scoring method. To examine associations among the features included in the scoring method. Nineteen knees of 19 patients with knee OA were imaged with MRI using conventional pulse sequences and a clinical 1.5 T MRI system. Images were independently analyzed by two musculoskeletal radiologists using a whole-organ MRI scoring method (WORMS) that incorporated 14 features: articular cartilage integrity, subarticular bone marrow abnormality, subarticular cysts, subarticular bone attrition, marginal osteophytes, medial and lateral meniscal integrity, anterior and posterior cruciate ligament integrity, medial and lateral collateral ligament integrity, synovitis/effusion, intraarticular loose bodies, and periarticular cysts/bursitis. Intraclass correlation coefficients (ICC) were determined for each feature as a measure of inter-observer agreement. Associations among the scores for different features were expressed as Spearman Rho. All knees showed structural abnormalities with MRI. Cartilage loss and osteophytes were the most prevalent features (98% and 92%, respectively). One of the least common features was ligament abnormality (8%). Inter-observer agreement for WORMS scores was high (most ICC values were >0.80). The individual features showed strong inter-associations. The WORMS method described in this report provides multi-feature, whole-organ assessment of the knee in OA using conventional MR images, and shows high inter-observer agreement among trained readers. This method may be useful in epidemiological studies and clinical trials of OA.

Carlos J Meheux,  Patrick C. McCulloch,  David M Lintner … (2016)
To determine (1) whether platelet-rich plasma (PRP) injection significantly improves validated patient-reported outcomes in patients with symptomatic knee osteoarthritis (OA) at 6 and 12 months postinjection, (2) differences in outcomes between PRP and corticosteroid injections or viscosupplementation or placebo injections at 6 and 12 months postinjection, and (3) similarities and differences in outcomes based on the PRP formulations used in the analyzed studies.