Overview of MicroRNA Biogenesis, Mechanisms of Actions, and Circulation 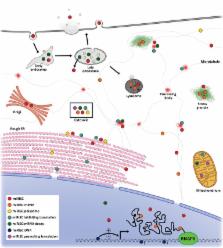 MicroRNAs (miRNAs) are a class of non-coding RNAs that play important roles in regulating gene expression. The majority of miRNAs are transcribed from DNA sequences into primary miRNAs and processed into precursor miRNAs, and finally mature miRNAs. In most cases, miRNAs interact with the 3′ untranslated region (3′ UTR) of target mRNAs to induce mRNA degradation and translational repression. However, interaction of miRNAs with other regions, including the 5′ UTR, coding sequence, and gene promoters, have also been reported. Under certain conditions, miRNAs can also activate translation or regulate transcription. The interaction of miRNAs with their target genes is dynamic and dependent on many factors, such as subcellular location of miRNAs, the abundancy of miRNAs and target mRNAs, and the affinity of miRNA-mRNA interactions. miRNAs can be secreted into extracellular fluids and transported to target cells via vesicles, such as exosomes, or by binding to proteins, including Argonautes. Extracellular miRNAs function as chemical messengers to mediate cell-cell communication. In this review, we provide an update on canonical and non-canonical miRNA biogenesis pathways and various mechanisms underlying miRNA-mediated gene regulations. We also summarize the current knowledge of the dynamics of miRNA action and of the secretion, transfer, and uptake of extracellular miRNAs.

Bruce Wightman,  Ilho Ha,  Gary Ruvkun (1993)
During C. elegans development, the temporal pattern of many cell lineages is specified by graded activity of the heterochronic gene Lin-14. Here we demonstrate that a temporal gradient in Lin-14 protein is generated posttranscriptionally by multiple elements in the lin-14 3'UTR that are regulated by the heterochronic gene Lin-4. The lin-14 3'UTR is both necessary and sufficient to confer lin-4-mediated posttranscriptional temporal regulation. The function of the lin-14 3'UTR is conserved between C. elegans and C. briggsae. Among the conserved sequences are seven elements that are each complementary to the lin-4 RNAs. A reporter gene bearing three of these elements shows partial temporal gradient activity. These data suggest a molecular mechanism for Lin-14p temporal gradient formation: the lin-4 RNAs base pair to sites in the lin-14 3'UTR to form multiple RNA duplexes that down-regulate lin-14 translation.

Eric Huntzinger,  Elisa Izaurralde (2011)
Despite their widespread roles as regulators of gene expression, important questions remain about target regulation by microRNAs. Animal microRNAs were originally thought to repress target translation, with little or no influence on mRNA abundance, whereas the reverse was thought to be true in plants. Now, however, it is clear that microRNAs can induce mRNA degradation in animals and, conversely, translational repression in plants. Recent studies have made important advances in elucidating the relative contributions of these two different modes of target regulation by microRNAs. They have also shed light on the specific mechanisms of target silencing, which, although it differs fundamentally between plants and animals, shares some common features between the two kingdoms.

Roles for microRNAs in conferring robustness to biological processes.

Margaret S. Ebert,  Phillip A. Sharp (2012)
Biological systems use a variety of mechanisms to maintain their functions in the face of environmental and genetic perturbations. Increasing evidence suggests that, among their roles as posttranscriptional repressors of gene expression, microRNAs (miRNAs) help to confer robustness to biological processes by reinforcing transcriptional programs and attenuating aberrant transcripts, and they may in some network contexts help suppress random fluctuations in transcript copy number. These activities have important consequences for normal development and physiology, disease, and evolution. Here, we will discuss examples and principles of miRNAs that contribute to robustness in animal systems. Copyright © 2012 Elsevier Inc. All rights reserved.

This article was submitted to Experimental Endocrinology, a section of the journal Frontiers in Endocrinology