COPD as a risk factor of the complications in lower limb arthroplasty: a patient-matched study 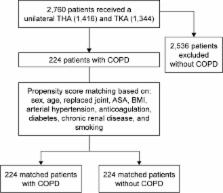 A relevant proportion of patients undergoing joint replacement surgery for the treatment of osteoarthritis exhibit COPD. This coincidence may result from an increased prevalence of both the diseases in elderly patients. In this study, COPD, which is known to be associated with a variety of comorbidities, and its potential interactions, eg, mediated via systemic inflammation, are discussed. The purpose of the present study was to identify the role of COPD as an independent risk factor for complications after total knee and hip arthroplasty.

All confounders were eliminated after matching. Preoperatively measured C-reactive protein and leukocytes were higher in the COPD group ( p<0.001; p=0.01, respectively). Intensive care unit admission was higher for COPD patients ( p=0.023). Pneumonia occurred in patients with COPD only ( p=0.024). There was a trend (not significant) toward a higher rate of wound infections, increased transfusion of red blood cells, and a prolonged hospital stay in patients with COPD.

COPD was associated with an increased length of hospital stay, a higher risk of pneumonia and wound infection, higher general complications, and an increased need for red blood cell transfusion. It is thus recommended to enhance the implementation of pneumonia prevention programs on surgical wards.

Cyrus Cooper,  Andrew Judge,  Daniel Prieto … (2014)
Data on the incidence of symptomatic osteoarthritis (OA) are scarce. We estimated incidence of clinical hip, knee and hand OA, and studied the effect of prevalent OA on joint-specific incident OA. SIDIAP contains primary care records for>5 million people from Catalonia (Spain). Participants aged ≥40 years with an incident diagnosis of knee, hip or hand OA between 2006 and 2010 were identified using International Classification of Diseases (ICD)-10 codes. Incidence rates and female-to-male rate ratios (RRs) for each joint site were calculated. Age, gender and body mass index-adjusted HR for future joint-specific OA according to prevalent OA at other sites were estimated using Cox regression. 3 266 826 participants were studied for a median of 4.45 years. Knee and hip OA rates increased continuously with age, and female-to-male RRs were highest at age 70-75 years. In contrast, female hand OA risk peaked at age 60-64 years, and corresponding female-to-male RR was highest at age 50-55 years. Adjusted HR for prevalent knee OA on risk of hip OA was 1.35 (99% CI 1.28 to 1.43); prevalent hip OA on incident knee OA: HR 1.15 (1.08 to 1.23). Prevalent hand OA predicted incident knee and hip OA: HR 1.20 (1.14 to 1.26) and 1.23 (1.13 to 1.34), respectively. The effect of age is greatest in the elderly for knee and hip OA, but around the menopause for hand OA. OA clusters within individuals, with higher risk of incident knee and hip disease from prevalent lower limb and hand OA. Published by the BMJ Publishing Group Limited. For permission to use (where not already granted under a licence) please go to http://group.bmj.com/group/rights-licensing/permissions.

Wound healing and infection in surgery: the pathophysiological impact of smoking, smoking cessation, and nicotine replacement therapy: a systematic review.

Debra L. Sorensen (2012)
The aim was to clarify how smoking and nicotine affects wound healing processes and to establish if smoking cessation and nicotine replacement therapy reverse the mechanisms involved. Smoking is a recognized risk factor for healing complications after surgery, but the pathophysiological mechanisms remain largely unknown. Pathophysiological studies addressing smoking and wound healing were identified through electronic databases (PubMed, EMBASE) and by hand-search of articles' bibliography. Of the 1460 citations identified, 325 articles were retained following title and abstract reviews. In total, 177 articles were included and systematically reviewed. Smoking decreases tissue oxygenation and aerobe metabolism temporarily. The inflammatory healing response is attenuated by a reduced inflammatory cell chemotactic responsiveness, migratory function, and oxidative bactericidal mechanisms. In addition, the release of proteolytic enzymes and inhibitors is imbalanced. The proliferative response is impaired by a reduced fibroblast migration and proliferation in addition to a downregulated collagen synthesis and deposition. Smoking cessation restores tissue oxygenation and metabolism rapidly. Inflammatory cell response is reversed in part within 4 weeks, whereas the proliferative response remains impaired. Nicotine does not affect tissue microenvironment, but appears to impair inflammation and stimulate proliferation. Smoking has a transient effect on the tissue microenvironment and a prolonged effect on inflammatory and reparative cell functions leading to delayed healing and complications. Smoking cessation restores the tissue microenvironment rapidly and the inflammatory cellular functions within 4 weeks, but the proliferative response remain impaired. Nicotine and nicotine replacement drugs seem to attenuate inflammation and enhance proliferation but the effect appears to be marginal.

Michael Brauer,  Chris Carlsten,  J. FitzGerald … (2013)
Ambient air pollution has been suggested as a risk factor for chronic obstructive pulmonary disease (COPD). However, there is a lack of longitudinal studies to support this assertion. To investigate the associations of long-term exposure to elevated traffic-related air pollution and woodsmoke pollution with the risk of COPD hospitalization and mortality. This population-based cohort study included a 5-year exposure period and a 4-year follow-up period. All residents aged 45-85 years who resided in Metropolitan Vancouver, Canada, during the exposure period and did not have known COPD at baseline were included in this study (n = 467,994). Residential exposures to traffic-related air pollutants (black carbon, particulate matter <2.5 μm in aerodynamic diameter, nitrogen dioxide, and nitric oxide) and woodsmoke were estimated using land-use regression models and integrating changes in residences during the exposure period. COPD hospitalizations and deaths during the follow-up period were identified from provincial hospitalization and death registration databases. An interquartile range elevation in black carbon concentrations (0.97 × 10(-5)/m, equivalent to 0.78 μg/m(3) elemental carbon) was associated with a 6% (95% confidence interval, 2-10%) increase in COPD hospitalizations and a 7% (0-13%) increase in COPD mortality after adjustment for covariates. Exposure to higher levels of woodsmoke pollution (tertile 3 vs. tertile 1) was associated with a 15% (2-29%) increase in COPD hospitalizations. There were positive exposure-response trends for these observed associations. Ambient air pollution, including traffic-related fine particulate pollution and woodsmoke pollution, is associated with an increased risk of COPD.