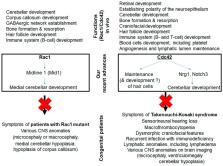 The small GTPases of the Rho-family (Rho-family GTPases) have various physiological functions, including cytoskeletal regulation, cell polarity establishment, cell proliferation and motility, transcription, reactive oxygen species (ROS) production, and tumorigenesis. A relatively large number of downstream targets of Rho-family GTPases have been reported for in vitro studies. However, only a small number of signal pathways have been established at the in vivo level. Cumulative evidence for the functions of Rho-family GTPases has been reported for in vivo studies using genetically engineered mouse models. It was based on different cell- and tissue-specific conditional genes targeting mice. In this review, we introduce recent advances in in vivo studies, including human patient trials on Rho-family GTPases, focusing on highly polarized sensory organs, such as the cochlea, which is the primary hearing organ, host defenses involving reactive oxygen species (ROS) production, and tumorigenesis (especially associated with RAC, novel RAC1-GSPT1 signaling, RHOA, and RHOBTB2).

Robert G. Gilbert,  Tony Yeung,  Jialan Shi … (2008)
Electrostatic interactions with negatively charged membranes contribute to the subcellular targeting of proteins with polybasic clusters or cationic domains. Although the anionic phospholipid phosphatidylserine is comparatively abundant, its contribution to the surface charge of individual cellular membranes is unknown, partly because of the lack of reagents to analyze its distribution in intact cells. We developed a biosensor to study the subcellular distribution of phosphatidylserine and found that it binds the cytosolic leaflets of the plasma membrane, as well as endosomes and lysosomes. The negative charge associated with the presence of phosphatidylserine directed proteins with moderately positive charge to the endocytic pathway. More strongly cationic proteins, normally associated with the plasma membrane, relocalized to endocytic compartments when the plasma membrane surface charge decreased on calcium influx.

P Neumeister,  T Goossens,  R Krishna Chaganti … (2001)
Genomic instability promotes tumorigenesis and can occur through various mechanisms, including defective segregation of chromosomes or inactivation of DNA mismatch repair. Although B-cell lymphomas are associated with chromosomal translocations that deregulate oncogene expression, a mechanism for genome-wide instability during lymphomagenesis has not been described. During B-cell development, the immunoglobulin variable (V) region genes are subject to somatic hypermutation in germinal-centre B cells. Here we report that an aberrant hypermutation activity targets multiple loci, including the proto-oncogenes PIM1, MYC, RhoH/TTF (ARHH) and PAX5, in more than 50% of diffuse large-cell lymphomas (DLCLs), which are tumours derived from germinal centres. Mutations are distributed in the 5' untranslated or coding sequences, are independent of chromosomal translocations, and share features typical of V-region-associated somatic hypermutation. In contrast to mutations in V regions, however, these mutations are not detectable in normal germinal-centre B cells or in other germinal-centre-derived lymphomas, suggesting a DLCL-associated malfunction of somatic hypermutation. Intriguingly, the four hypermutable genes are susceptible to chromosomal translocations in the same region, consistent with a role for hypermutation in generating translocations by DNA double-strand breaks. By mutating multiple genes, and possibly by favouring chromosomal translocations, aberrant hypermutation may represent the major contributor to lymphomagenesis.

The 'invisible hand': regulation of RHO GTPases by RHOGDIs.

Etienne Boulter,  Keith Burridge,  R Mata (2011)
The 'invisible hand' is a term originally coined by Adam Smith in The Theory of Moral Sentiments to describe the forces of self-interest, competition and supply and demand that regulate the resources in society. This metaphor continues to be used by economists to describe the self-regulating nature of a market economy. The same metaphor can be used to describe the RHO-specific guanine nucleotide dissociation inhibitor (RHOGDI) family, which operates in the background, as an invisible hand, using similar forces to regulate the RHO GTPase cycle.