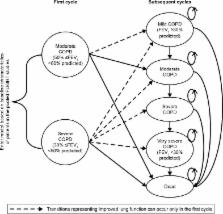 A Markov model was constructed from the US payer perspective. Health states were defined as mild (post-bronchodilator FEV 1 ≥80% of predicted), moderate (50% ≤FEV 1 <80% of predicted), severe (30% ≤FEV 1 <50% of predicted), and very severe (FEV 1 <30% of predicted) COPD. Patients entering the model transitioned through health states based on placebo-adjusted change from baseline in trough FEV 1 for each comparator at week 12. Comparators included other US Food and Drug Administration-approved LABA/LAMA fixed-dose combinations as well as commonly prescribed LAMA and LABA/inhaled corticosteroid agents. One-way and probabilistic sensitivity analyses were conducted to test the model assumptions and the overall robustness of the results.

This model, developed from the US payer perspective with a 5-year time horizon, found IND/GLY 27.5/15.6 µg to be a cost-effective treatment option for patients with moderate to severe COPD.

Obstructive lung disease and low lung function in adults in the United States: data from the National Health and Nutrition Examination Survey, 1988-1994.

David R. Gagnon,  E Lydick,  D. Mannino … (2000)
Obstructive lung disease (OLD) is an important cause of morbidity and mortality in the US adult population. Potentially treatable mild cases of OLD often go undetected. This analysis determines the national estimates of reported OLD and low lung function in the US adult population. We examined data from the Third National Health and Nutrition Examination Survey (NHANES III), a multistage probability representative sample of the US population. A total of 20,050 US adults participated in NHANES III from 1988 to 1994. Our main outcome measures were low lung function (a condition determined to be present if the forced expiratory volume in 1 second-forced vital capacity ratio was less than 0.7 and the forced expiratory volume in 1 second was less than 80% of the predicted value), a physician diagnosis of OLD (chronic bronchitis, asthma, or emphysema), and respiratory symptoms. Overall a mean (SE) of 6.8% (0.3%) of the population had low lung function, and 8.5% (0.3%) of the population reported OLD. Obstructive lung disease (age-adjusted to study population) was currently reported among 12.5% (0.7%) of current smokers, 9.4% (0.6%) of former smokers, 3.1% (1.1%) of pipe or cigar smokers, and 5.8% (0.4%) of never smokers. Surprisingly, 63.3% (0.2%) of the subjects with documented low lung function had no prior or current reported diagnosis of any OLD. This study demonstrates that OLD is present in a substantive number of US adults. In addition, many US adults have low lung function but no reported OLD diagnosis, which may indicate the presence of undiagnosed lung disease.

Anthony D’Urzo,  Stephen Rennard,  Edward Kerwin … (2014)
Background Combining two long-acting bronchodilators with complementary mechanisms of action may provide treatment benefits to patients with chronic obstructive pulmonary disease (COPD) that are greater than those derived from either treatment alone. The efficacy and safety of a fixed-dose combination (FDC) of aclidinium bromide, a long-acting muscarinic antagonist, and formoterol fumarate, a long-acting β2-agonist, in patients with moderate to severe COPD are presented. Methods In this 24-week double-blind study, 1692 patients with stable COPD were equally randomized to twice-daily treatment with FDC aclidinium 400 μg/formoterol 12 μg (ACL400/FOR12 FDC), FDC aclidinium 400 μg/formoterol 6 μg (ACL400/FOR6 FDC), aclidinium 400 μg, formoterol 12 μg, or placebo administered by a multidose dry powder inhaler (Genuair®/Pressair®)*. Coprimary endpoints were change from baseline to week 24 in 1-hour morning postdose FEV1 (FDCs versus aclidinium) and change from baseline to week 24 in morning predose (trough) FEV1 (FDCs versus formoterol). Secondary endpoints were change from baseline in St. George’s Respiratory Questionnaire (SGRQ) total score and improvement in Transition Dyspnea Index (TDI) focal score at week 24. Safety and tolerability were also assessed. Results At study end, improvements from baseline in 1-hour postdose FEV1 were significantly greater in patients treated with ACL400/FOR12 FDC or ACL400/FOR6 FDC compared with aclidinium (108 mL and 87 mL, respectively; p < 0.0001). Improvements in trough FEV1 were significantly greater in patients treated with ACL400/FOR12 FDC versus formoterol (45 mL; p = 0.0102), a numerical improvement of 26 mL in trough FEV1 over formoterol was observed with ACL400/FOR6 FDC. Significant improvements in both SGRQ total and TDI focal scores were observed in the ACL400/FOR12 FDC group at study end (p < 0.0001), with differences over placebo exceeding the minimal clinically important difference of ≥4 points and ≥1 unit, respectively. All treatments were well tolerated, with safety profiles of the FDCs similar to those of the monotherapies. Conclusions Treatment with twice-daily aclidinium 400 μg/formoterol 12 μg FDC provided rapid and sustained bronchodilation that was greater than either monotherapy; clinically significant improvements in dyspnea and health status were evident compared with placebo. Aclidinium/formoterol FDC may be an effective and well tolerated new treatment option for patients with COPD. Trial registration Clinicaltrials.gov NCT01437397. *Registered trademarks of Almirall S.A., Barcelona, Spain; for use within the US as Pressair® and Genuair® within all other licensed territories. Electronic supplementary material The online version of this article (doi:10.1186/s12931-014-0123-0) contains supplementary material, which is available to authorized users.