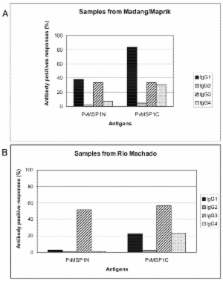 Progress towards the development of a malaria vaccine against Plasmodium vivax, the most widely distributed human malaria parasite, will require a better understanding of the immune responses that confer clinical protection to patients in regions where malaria is endemic.

Glutathione S-transferase (GST) and GST-fusion proteins representing the N- terminus of the merozoite surface protein 1 of P. vivax, PvMSP1-N, and the C-terminus, PvMSP1-C, were covalently coupled to BioPlex carboxylated beads. Recombinant proteins and coupled beads were used, respectively, in ELISA and Bioplex assays using immune sera of P. vivax patients from Brazil and PNG to determine IgG and subclass responses. Concordances between the two methods in the seropositivity responses were evaluated using the Kappa statistic and the Spearman's rank correlation.

The results using this methodology were compared with the classical microtitre enzyme-linked immnosorbent assay (ELISA), showing that the assay was sensitive, reproducible and had good concordance with ELISA; yet, further research into different statistical analyses seems desirable before claiming conclusive results exclusively based on multiplex assays. As expected, results demonstrated that PvMSP1 was immunogenic in natural infections of patients from different endemic regions of Brazil and Papua New Guinea (PNG), and that age correlated only with antibodies against the C-terminus part of the molecule. Furthermore, the IgG subclass profiles were different in these endemic regions having IgG3 predominantly recognizing PvMSP1 in Brazil and IgG1 predominantly recognizing PvMSP1 in PNG.

This study validates the use of the multiplex assay to measure naturally-acquired IgG antibodies against the merozoite surface protein 1 of P. vivax.

Key gaps in the knowledge of Plasmodium vivax, a neglected human malaria parasite.

Ivo Mueller,  Mary Galinski,  J. Baird … (2009)
Plasmodium vivax is geographically the most widely distributed cause of malaria in people, with up to 2.5 billion people at risk and an estimated 80 million to 300 million clinical cases every year--including severe disease and death. Despite this large burden of disease, P vivax is overlooked and left in the shadow of the enormous problem caused by Plasmodium falciparum in sub-Saharan Africa. The technological advances enabling the sequencing of the P vivax genome and a recent call for worldwide malaria eradication have together placed new emphasis on the importance of addressing P vivax as a major public health problem. However, because of this parasite's biology, it is especially difficult to interrupt the transmission of P vivax, and experts agree that the available methods for preventing and treating infections with P vivax are inadequate. It is thus imperative that the development of new methods and strategies become a priority. Advancing the development of such methods needs renewed emphasis on understanding the biology, pathogenesis, and epidemiology of P vivax. This Review critically examines what is known about P vivax, focusing on identifying the crucial gaps that create obstacles to the elimination of this parasite in human populations.

F. Javier Alves,  K Krieger,  Gabriel H Campolina-Silva … (2002)
The epidemiology of malaria in 2 riverine localities in Rondĵnia, Brazilian western Amazĵnia, was assessed by a 1-year study at Portuchuelo, and a cross-sectional survey at riverine communities at Rio Machado (= Ji-Parana). Plasmodium spp. infections were diagnosed by light microscopy and by polymerase chain reaction (PCR) amplification of ribosomal DNA. PCR was 6-7 times more efficient than microscopy for detecting plasmodial infections. Both Plasmodium vivax and Plasmodium falciparum infections occurred as asymptomatic and symptomatic forms of the disease. The relation between symptomatic and asymptomatic clinical forms was roughly similar for both species of Plasmodium. Symptomless patients were monitored for 2 months. The prevalence of symptomless infections was 4-5 times higher than the symptomatic ones--respectively, 20% and 4.6% for Portuchuelo and 49.5% and 10% for Ji-Parana. Symptomatic malaria occurred mostly in patients in younger age groups. In contrast, there was a significant association of symptomless malaria with older age groups (medians of 26.5 and 21 years, respectively, for Portuchuelo and Ji-Parana), whereas the age medians for symptomatic malaria were 14 and 8 years, respectively, in the 2 regions. Symptomatic malaria also was more prevalent in groups living for shorter times in Amazĵnia (13 and 4 years, respectively, for Portuchuelo and Ji-ParanA) as compared with symptomless malaria, which was more prevalent in groups living for longer periods in the region (medians of 25.5 and 18 years, respectively, for Portuchuelo and Ji-Paraná). The high prevalence of symptomless malaria may pose new problems for the currently adopted strategy for the control of malaria in the Amazonian region, which is essentially based on the treatment of symptomatic patients.

Asymptomatic carriers of Plasmodium spp. as infection source for malaria vector mosquitoes in the Brazilian Amazon.