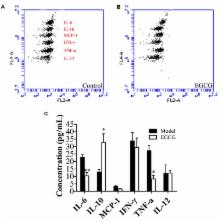 Background: Aberrant chronic inflammation and excess accumulation of lipids play a pivotal role in the occurrence and progression of atherosclerosis. (-)-Epigallocatechin-3-gallate (EGCG), the major catechins in green tea, displayed anti-atherosclerotic properties in vivo and in vitro. However, the effects and underlying mechanism of EGCG on atherosclerosis remain unclear.

Conclusion: Taken together, our data for the first time suggested that TTC39B was involved in EGCG-mediated anti-atherosclerotic effects through modulation of LXR/SREBP-1 pathway.

Biological, Clinical, and Population Relevance of 95 Loci for Blood Lipids

Tanya M. Teslovich,  Kiran Musunuru,  Albert V. Smith … (2010)
Serum concentrations of total cholesterol, low-density lipoprotein cholesterol (LDL-C), high-density lipoprotein cholesterol (HDL-C), and triglycerides (TG) are among the most important risk factors for coronary artery disease (CAD) and are targets for therapeutic intervention. We screened the genome for common variants associated with serum lipids in >100,000 individuals of European ancestry. Here we report 95 significantly associated loci (P < 5 × 10-8), with 59 showing genome-wide significant association with lipid traits for the first time. The newly reported associations include single nucleotide polymorphisms (SNPs) near known lipid regulators (e.g., CYP7A1, NPC1L1, and SCARB1) as well as in scores of loci not previously implicated in lipoprotein metabolism. The 95 loci contribute not only to normal variation in lipid traits but also to extreme lipid phenotypes and impact lipid traits in three non-European populations (East Asians, South Asians, and African Americans). Our results identify several novel loci associated with serum lipids that are also associated with CAD. Finally, we validated three of the novel genes—GALNT2, PPP1R3B, and TTC39B—with experiments in mouse models. Taken together, our findings provide the foundation to develop a broader biological understanding of lipoprotein metabolism and to identify new therapeutic opportunities for the prevention of CAD.

Brahma Singh,  Sharmila Shankar,  Rakesh Srivastava (2011)
An expanding body of preclinical evidence suggests EGCG, the major catechin found in green tea (Camellia sinensis), has the potential to impact a variety of human diseases. Apparently, EGCG functions as a powerful antioxidant, preventing oxidative damage in healthy cells, but also as an antiangiogenic and antitumor agent and as a modulator of tumor cell response to chemotherapy. Much of the cancer chemopreventive properties of green tea are mediated by EGCG that induces apoptosis and promotes cell growth arrest by altering the expression of cell cycle regulatory proteins, activating killer caspases, and suppressing oncogenic transcription factors and pluripotency maintain factors. In vitro studies have demonstrated that EGCG blocks carcinogenesis by affecting a wide array of signal transduction pathways including JAK/STAT, MAPK, PI3K/AKT, Wnt and Notch. EGCG stimulates telomere fragmentation through inhibiting telomerase activity. Various clinical studies have revealed that treatment by EGCG inhibits tumor incidence and multiplicity in different organ sites such as liver, stomach, skin, lung, mammary gland and colon. Recent work demonstrated that EGCG reduced DNMTs, proteases, and DHFR activities, which would affect transcription of TSGs and protein synthesis. EGCG has great potential in cancer prevention because of its safety, low cost and bioavailability. In this review, we discuss its cancer preventive properties and its mechanism of action at numerous points regulating cancer cell growth, survival, angiogenesis and metastasis. Therefore, non-toxic natural agent could be useful either alone or in combination with conventional therapeutics for the prevention of tumor progression and/or treatment of human malignancies. Copyright Â© 2011 Elsevier Inc. All rights reserved.