Predictors of re-hospitalization over a two-year follow-up period among patients with schizophrenia enrolled in a community management program in Chengdu, China Translated title: 成都市社区精神分裂症患者再入院的相关因素 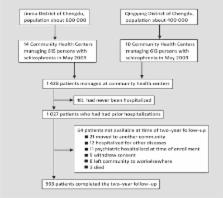 Publisher: Editorial Department of the Shanghai Archives of Psychiatry

China has recently introduced a community-based service network for managing individuals with schizophrenia but there has been relatively little formal evaluation of the effectiveness of this approach.

Assess the retention rate and the two-year re-hospitalization rate of patients who are enrolled in the community management network in Chengdu, China.

Patients with a confirmed diagnosis of schizophrenia who had at least one prior hospitalization and who were enrolled in the service network at the community health clinics in 14 communities in the Jinniu District of Chengdu and 10 communities in the Qingyang District of Chengdu participated in the two-year prospective follow-up assessment. Detailed demographic and clinical information was obtained at the time of intake into the follow-up program and their hospitalization status was recorded during monthly evaluations over the subsequent two years.

Of the 1 027 participating patients, 963 (93.8%) remained in the program for the entire two-year period. Patients with a lower level of education and those who did not live with family members were more likely to drop-out of the network. Among the 963 patients who completed the follow-up 174 (18.1%) were re-hospitalized over the two-year period. Multivariate logistic regression identified factors related to re-hospitalization: not married or not living with family members, having more prominent positive and negative symptoms at the time of intake, and using medication less in the six months prior to intake.

The 94% two-year retention of patients in this urban community management network for individuals with schizophrenia was excellent and the two-year re-hospitalization rate of 18% is better than that reported in most similar programs in other countries. Patients not living with family members were at higher risk for dropping out of the network and for re-hospitalization so this is a high-risk group that deserves special attention. Standardization of the community interventions and longer follow-up studies with control communities that consider the full range of factors relevant to the well-being of patients with schizophrenia (i.e., social integration, quality of life and re-hospitalization) are needed to definitively demonstrate the effectiveness of this community service network.

J Walkup,  P Weiden,  D Mechanic … (1999)
This study determines patient characteristics that predict early hospital readmission in schizophrenia and evaluates the extent to which inpatient staff accurately predict these readmissions. Adult inpatients with schizophrenia or schizoaffective disorder (N = 262) were evaluated at hospital discharge and 3 months later to assess hospital readmission. At hospital discharge, inpatient staff were asked to identify which patients were likely to be readmitted during this period. Comparisons were made between patients who were or were not readmitted and between readmitted patients who were or were not identified by staff as likely to be readmitted; 24.4% of the sample were readmitted within 3 months of hospital discharge. Early readmission was associated with four or more previous hospitalizations (85.7% vs. 57.7%, p = .004), comorbid substance use disorder (60.3% vs. 35.5%, p = .0006), major depression (40.6% vs. 26.8%, p = .04), absence of a family meeting with inpatient staff (58.2% vs. 41.8%, p = .02), and prescription of a conventional rather than an atypical antipsychotic medication (93.7% vs. 83.8%, p = .045). Twelve of the 63 readmitted patients were correctly predicted by staff to re-hospitalize. Staff tended to overestimate the risk of rehospitalization in patients with a poor therapeutic alliance, low global function, or initial involuntary admission and to underestimate the risk in patients with alcohol use disorders or four or more previous psychiatric hospitalizations. Early rehospitalization is common in schizophrenia and difficult to predict. Greater emphasis on comorbid alcohol use disorders and a history of multiple previous admissions may help clinicians identify patients at greatest risk for early rehospitalization.

From the asylum to community care: learning from experience.

Helen Killaspy (2005)
A review of research and policy on community care was carried out. The methods used included the following: (i) Medline search using terms: 'mental health' and 'community care and long-term conditions' and 'community care'; (ii) Searches of the Department of Health and the Royal College of Psychiatrists' websites using the term 'community care' and (iii) hand search of historical texts on the development of community care. Medline searches returned 349 titles in total. Inclusion criteria were quality and relevance to other specialties. Policy material was included to illustrate the socio-political context of the development of community services. Community care was consistently associated with greater patient satisfaction and quality of life across specialties. It was not a cheaper alternative to hospital care. Disadvantages included the exodus of experienced inpatient staff to community settings and the development of alternative institutions in the non-statutory sector. Those planning community-based care for physical health problems should learn from the experience of mental health services.