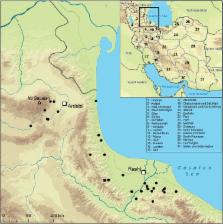 An initial checklist of mayflies ( Ephemeroptera ) of Iran is compiled based on critical review of available literature data, complemented with new data from 38 localities of Gilan and Ardabil provinces. At present, altogether only 46 species and 25 genera are known from Iran, 18 species are reported as new to Iran in this study. Some previously published data are critically evaluated and doubtful taxa are excluded from the list. Basic analysis of the distribution and biogeography of recorded species is given. Procloeon ( Pseudocentroptilum) caspicum Sroka, sp. n. is described based on mature larva and egg. Critical differential diagnostic characters distinguishing the species from related taxa are discussed in detail.

The Phylogenetic System of Ephemeroptera

A systematic review on status of lead pollution and toxicity in Iran; Guidance for preventive measures

Parissa Karrari,  Omid Mehrpour,  Mohammad Abdollahi (2012)
Lead is an old environmental metal which is presented everywhere and lead poisoning is an important health issue in many countries in the world including Iran. It is known as a silent environmental disease which can have life-long adverse health effects. In children, the most vulnerable population, mental development of children health effects is of the greatest influence. Low level lead exposure can significantly induce motor dysfunctions and cognitive impairment in children. The sources of lead exposure vary among countries. Occupational lead exposure is an important health issue in Iran and mine workers, employees of paint factories, workers of copying centers, drivers, and tile making factories are in higher risk of lead toxicity. Moreover lead processing industry has always been a major of concern which affects surface water, drinking waters, and ground waters, even water of Caspian Sea, Persian Gulf and rivers due to increasing the number of industries in vicinity of rivers that release their waste discharges into river or sea. In addition, lead contamination of soil and air especially in vicinity of polluted and industrialized cities is another health problem in Iran. Even foods such as rice and fishes, raw milk, and vegetables which are the most common food of Iranian population are polluted to lead in some area of Iran. Adding lead to the opium is a recently health hazard in Iran that has been observed among opium addicts. There are few studies evaluated current status of lead exposure and toxicity in the Iranian children and pregnant women which should be taken into account of authorities. We recommend to identify sources, eliminate or control sources, and monitor environmental exposures and hazards to prevent lead poisoning.

S Ormerod,  M Bruford,  H. H. Williams (2006)
Genetic studies have highlighted cryptic diversity in many well-known taxa including aquatic insects, with the general implication that there are more species than are currently recognised. Baetis rhodani Pictet are among the most widespread, abundant and ecologically important of all European mayflies (Ephemeroptera), and used widely as biological indicators of stream quality. Traditional taxonomy and systematics have never fully resolved differences among suspected cryptic species in the B. rhodani complex because morphological characters alone do not allow reliable distinction. This is particularly true among larvae, the life-stage used most widely in monitoring. Here, we assess the molecular diversity of this complex in one of the largest such studies of cryptic species in the order Ephemeroptera to date. Phylogenies were constructed using data from the mitochondrial cytochrome oxidase subunit I (COI) gene. Two monophyletic groups were recovered consisting of one major haplogroup and a second clade of 6 smaller but distinct haplogroups. Haplogroup divergence ranged from 0.2-3% (within) to 8-19% (among) with the latter values surpassing maxima typically reported for other insects, and provides strong evidence for cryptic species in the B. rhodani complex. The taxonomic status of these seven haplogroups remains undefined. Their distributions across Western Europe reveal no obvious geographic pattern, suggesting widespread diffusion of genetic lineages since the last glacial maximum. The implications of these findings are far-reaching given the ecological and bioindicator significance of what now appears to be several taxa.