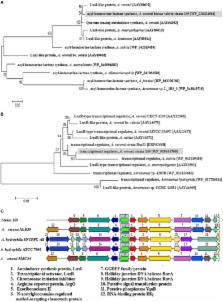 E. Peter Greenberg,  C. Phoebe Lostroh,  Martin Schuster … (2003)
There are two interrelated acyl-homoserine lactone quorum-sensing-signaling systems in Pseudomonas aeruginosa. These systems, the LasR-LasI system and the RhlR-RhlI system, are global regulators of gene expression. We performed a transcriptome analysis to identify quorum-sensing-controlled genes and to better understand quorum-sensing control of P. aeruginosa gene expression. We compared gene expression in a LasI-RhlI signal mutant grown with added signals to gene expression without added signals, and we compared a LasR-RhlR signal receptor mutant to its parent. In all, we identified 315 quorum-induced and 38 quorum-repressed genes, representing about 6% of the P. aeruginosa genome. The quorum-repressed genes were activated in the stationary phase in quorum-sensing mutants but were not activated in the parent strain. The analysis of quorum-induced genes suggests that the signal specificities are on a continuum and that the timing of gene expression is on a continuum (some genes are induced early in growth, most genes are induced at the transition from the logarithmic phase to the stationary phase, and some genes are induced during the stationary phase). In general, timing was not related to signal concentration. We suggest that the level of the signal receptor, LasR, is a critical trigger for quorum-activated gene expression. Acyl-homoserine lactone quorum sensing appears to be a system that allows ordered expression of hundreds of genes during P. aeruginosa growth in culture.

E. Peter Greenberg,  Clay Fuqua (2002)
Bacterial cell-to-cell signalling has emerged as a new area in microbiology. Individual bacterial cells communicate with each other and co-ordinate group activities. Although a lot of detail is known about the mechanisms of a few well-characterized bacterial communication systems, other systems have been discovered only recently. Bacterial intercellular communication has become a target for the development of new anti-virulence drugs.

Quorum sensing and Chromobacterium violaceum: exploitation of violacein production and inhibition for the detection of N-acylhomoserine lactones.

Gurpreet Chhabra,  B W Bycroft,  Edmund Lamb … (1997)
Quorum sensing relies upon the interaction of a diffusible signal molecule with a transcriptional activator protein to couple gene expression with cell population density. In Gram-negative bacteria, such signal molecules are usually N-acylhomoserine lactones (AHLs) which differ in the structure of their N-acyl side chains. Chromobacterium violaceum, a Gram-negative bacterium commonly found in soil and water, produces the characteristic purple pigment violacein. Previously the authors described a violacein-negative, mini-Tn5 mutant of C. violaceum (CV026) in which pigment production can be restored by incubation with supernatants from the wild-type strain. To develop this mutant as a general biosensor for AHLs, the natural C. violaceum AHL molecule was first chemically characterized. By using solvent extraction, HPLC and mass spectrometry, a single AHL, N-hexanoyl-L-homoserine lactone (HHL), was identified in wild-type C. violaceum culture supernatants which was absent from CV026. Since the production of violacein constitutes a simple assay for the detection of AHLs, we explored the ability of CV026 to respond to a series of synthetic AHL and N-acylhomocysteine thiolactone (AHT) analogues. In CV026, violacein is inducible by all the AHL and AHT compounds evaluated with N-acyl side chains from C4 to C8 in length, with varying degrees of sensitivity. Although AHL compounds with N-acyl side chains from C10 to C14 are unable to induce violacein production, if an activating AHL (e.g. HHL) is incorporated into the agar, these long-chain AHLs can be detected by their ability to inhibit violacein production. The versatility of CV026 in facilitating detection of AHL mixtures extracted from culture supernatants and separated by thin-layer chromatography is also demonstrated. These simple bioassays employing CV026 thus greatly extend the ability to detect a wide spectrum of AHL signal molecules.