Statin Therapy Prescribing for Patients with Type 2 Diabetes Mellitus: A Review of Current Evidence and Challenges 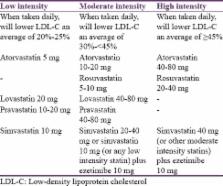 Use of statin therapy in patients with type 2 diabetes mellitus (T2DM) has been recommended by most clinical guidelines. Cardiovascular disease (CVD) is a leading cause of morbidity and mortality among T2DM patients. It has been proved that statins are effective for primary or secondary CVD prophylaxis. Reports have highlighted the underutilization of statins in clinical practice and the suboptimal adherence to guideline recommendations. This review article points to summarize the current evidence confirming the role of statins in T2DM patients and to provide an overview of factors that may affect statins’ prescribing patterns and compliance in clinical practice. Initiatives to enhance statin therapy prescribing should recognize the comprehensive nature of the prescribing process. Attempts to assure proper statin prescribing and utilization can help in achieving better clinical outcomes of statin therapy.

Kun-Ho Yoon,  Jin-Hee Lee,  Ji-Won Kim … (2006)
The proportions of people with type 2 diabetes and obesity have increased throughout Asia, and the rate of increase shows no sign of slowing. People in Asia tend to develop diabetes with a lesser degree of obesity at younger ages, suffer longer with complications of diabetes, and die sooner than people in other regions. Childhood obesity has increased substantially and the prevalence of type 2 diabetes has now reached epidemic levels in Asia. The health consequences of this epidemic threaten to overwhelm health-care systems in the region. Urgent action is needed, and advocacy for lifestyle changes is the first step. Countries should review and implement interventions, and take a comprehensive and integrated public-health approach. At the level of primary prevention, such programmes can be linked to other non-communicable disease prevention programmes that target lifestyle-related issues. The cost of inaction is clear and unacceptable.

A D Mooradian (2009)
Dyslipidemia is one of the major risk factors for cardiovascular disease in diabetes mellitus. The characteristic features of diabetic dyslipidemia are a high plasma triglyceride concentration, low HDL cholesterol concentration and increased concentration of small dense LDL-cholesterol particles. The lipid changes associated with diabetes mellitus are attributed to increased free fatty acid flux secondary to insulin resistance. The availability of multiple lipid-lowering drugs and supplements provides new opportunities for patients to achieve target lipid levels. However, the variety of therapeutic options poses a challenge in the prioritization of drug therapy. The prevalence of hypercholesterolemia is not increased in patients with diabetes mellitus, but mortality from coronary heart disease increases exponentially as a function of serum cholesterol levels, and lowering of cholesterol with statins reduces diabetic patients' relative cardiovascular risk. Although drug therapy for dyslipidemia must be individualized, most people with diabetes mellitus are candidates for statin therapy, and often need treatment with multiple agents to achieve therapeutic goals.

MRC/BHF Heart Protection Study of cholesterol-lowering with simvastatin in 5963 people with diabetes: a randomised placebo-controlled trial.

Jane Armitage,  Peter Sleigh,  Sarah Parish … (2003)
Individuals with diabetes are at increased risk of cardiovascular morbidity and mortality, although typically their plasma concentrations of LDL cholesterol are similar to those in the general population. Previous evidence about the effects of lowering cholesterol in people with diabetes has been limited, and most diabetic patients do not currently receive cholesterol-lowering therapy despite their increased risk. 5963 UK adults (aged 40-80 years) known to have diabetes, and an additional 14573 with occlusive arterial disease (but no diagnosed diabetes), were randomly allocated to receive 40 mg simvastatin daily or matching placebo. Prespecified analyses in these prior disease subcategories, and other relevant subcategories, were of first major coronary event (ie, non-fatal myocardial infarction or coronary death) and of first major vascular event (ie, major coronary event, stroke or revascularisation). Analyses were also conducted of subsequent vascular events during the scheduled treatment period. Comparisons are of all simvastatin-allocated versus all placebo-allocated participants (ie, intention to treat), which yielded an average difference in LDL cholesterol of 1.0 mmol/L (39 mg/dL) during the 5-year treatment period. Both among the participants who presented with diabetes and among those who did not, there were highly significant reductions of about a quarter in the first event rate for major coronary events, for strokes, and for revascularisations. For the first occurrence of any of these major vascular events among participants with diabetes, there was a definite 22% (95% CI 13-30) reduction in the event rate (601 [20.2%] simvastatin-allocated vs 748 [25.1%] placebo-allocated, p<0.0001), which was similar to that among the other high-risk individuals studied. There were also highly significant reductions of 33% (95% CI 17-46, p=0.0003) among the 2912 diabetic participants who did not have any diagnosed occlusive arterial disease at entry, and of 27% (95% CI 13-40, p=0.0007) among the 2426 diabetic participants whose pretreatment LDL cholesterol concentration was below 3.0 mmol/L (116 mg/dL). The proportional reduction in risk was also about a quarter among various other subcategories of diabetic patient studied, including: those with different duration, type, or control of diabetes; those aged over 65 years at entry or with hypertension; and those with total cholesterol below 5.0 mmol/L (193 mg/dL). In addition, among participants who had a first major vascular event following randomisation, allocation to simvastatin reduced the rate of subsequent events during the scheduled treatment period. The present study provides direct evidence that cholesterol-lowering therapy is beneficial for people with diabetes even if they do not already have manifest coronary disease or high cholesterol concentrations. Allocation to 40 mg simvastatin daily reduced the rate of first major vascular events by about a quarter in a wide range of diabetic patients studied. After making allowance for non-compliance, actual use of this statin regimen would probably reduce these rates by about a third. For example, among the type of diabetic patient studied without occlusive arterial disease, 5 years of treatment would be expected to prevent about 45 people per 1000 from having at least one major vascular event (and, among these 45 people, to prevent about 70 first or subsequent events during this treatment period). Statin therapy should now be considered routinely for all diabetic patients at sufficiently high risk of major vascular events, irrespective of their initial cholesterol concentrations.