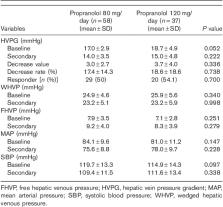 Gennaro D'Amico,  Luigi Pagliaro,  Jaime Bosch (1999)
Continuing advances in the knowledge of the pathophysiology of portal hypertension result in the progressive expansion of the spectrum of drugs with a potential role for clinical practice, with objectives that now tend to include the prevention of the enlargement or even the development of esophageal varices. This systematic review summarizes the evidence of efficacy of drug therapy for portal hypertension and draws recommendations for clinical practice. Although there is not yet enough evidence to support the treatment for the prevention of the development or enlargement of varices, nonselective beta-blockers are the first-choice therapy to prevent the first bleeding in patients with medium or large-sized varices and rebleeding in patients surviving a bleeding episode. The clinical role of isosorbide-5-mononitrate either alone or in association with beta-blockers still remains unsettled. Vasoactive drugs are generally effective and safe in controlling acute variceal bleeding, although the evidence is not equivalent for each of them.

Carvedilol for primary prophylaxis of variceal bleeding in cirrhotic patients with haemodynamic non-response to propranolol.

Pharmacological reduction of portal pressure and long-term risk of first variceal bleeding in patients with cirrhosis.

Juan Abraldes,  Jaime Bosch,  Manuel Moreno-Hernandez … (2006)
A reduction in hepatic venous pressure gradient (HVPG) of > or =20% of baseline or to < or =12 mmHg (responders) is associated with a reduced risk of first variceal bleeding. The aim of this study was to evaluate whether this protective effect is maintained in the long term and if it extends to other portal hypertension complications. Seventy-one cirrhotic patients with esophageal varices and without previous variceal bleeding who entered into a program of prophylactic pharmacological therapy and were followed for up to 8 yr were evaluated. All had two separate HVPG measurements, at baseline and after pharmacological therapy with propranolol +/- isosorbide mononitrate. Forty-six patients were nonresponders and 25 were responders. Eight-year cumulative probability of being free of first variceal bleeding was higher in responders than in nonresponders (90% vs 45%, p= 0.026). The lack of hemodynamic response and low platelet count were the only independent predictors of first variceal bleeding. Additionally, reduction of HVPG was independently associated with a decreased risk of spontaneous bacterial peritonitis (SBP) or bacteremia. No significant differences in the development of ascites, hepatic encephalopathy, or survival were observed. The hemodynamic response in cirrhotic patients is associated with a sustained reduction in the risk of first variceal bleeding over a long-term follow-up. Reduction of HVPG also correlate with a reduced risk of SBP or bacteremia.

This is an open-access article distributed under the terms of the Creative Commons Attribution-Non Commercial-No Derivatives License 4.0 (CCBY-NC-ND), where it is permissible to download and share the work provided it is properly cited. The work cannot be changed in any way or used commercially without permission from the journal. http://creativecommons.org/licenses/by-nc-nd/4.0/