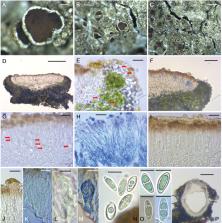 Lecanora baekdudaeganensis Lee & Hur is described as a new lichenized fungus from Baekdudaegan Mountains, South Korea. The new species is classified into the Lecanora subfusca group – allophana type and distinguishable from Lecanora imshaugii Brodo by a darker thallus, brownish disc, K–insoluble granules on the surface of the epihymenium, shorter hypothecium, and the presence of oil droplets in the apothecial section. Molecular analyses employing internal transcribed spacer (ITS) and mitochondrial small subunit (mtSSU) sequences strongly support Lecanora baekdudaeganensis as a distinct species in the genus Lecanora . A surrogate key is provided to assist in the identification of all 52 taxa in the genus Lecanora of Korea.

Christoph Sperisen,  Stefan Zoller,  Christoph Scheidegger (1999)
Four primers for the amplification of mitochondrial DNA of lichenforming ascomycetes are presented. The primers match the conserved regions U2, U4, and U6, respectively, of mitochondrial small subunit (SSU) ribosomal DNA (rDNA). Polymerase chain reaction using different combinations of the primers produced single amplification products from DNA of eight lichen-forming fungal species but did not amplify DNA of two axenic cultured algal species. The amplification product obtained from Lobaria pulmonaria was sequenced and the 894-bp sequence was compared with the mitochondrial SSU rDNA sequence of Podospora anserine . The two sequences revealed more than 76% identity in the conserved regions U3 to U5 demonstrating that we amplified mitochondrial DNA. The primers matching U2 and U6 yielded amplification products of 800–1000 bp depending on the species examined. The variation observed suggests that mitochondrial SSU rDNA may be useful for phylogenetic analyses of lichen-forming ascomycetes.

A new taxonomy of the family Teloschistaceae