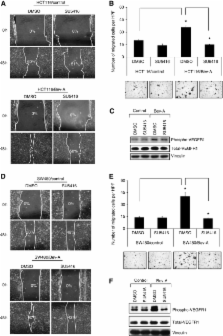 Bevacizumab (Bev), a monoclonal antibody to vascular endothelial growth factor (VEGF), is used in combination with chemotherapy for the treatment of metastatic colorectal cancer (CRC). The effects of Bev on angiogenesis have been well described, but the direct effect of Bev on tumour cells is unknown. This study was carried out to determine the molecular and phenotypic changes in CRC cells after chronic Bev exposure in vitro.

Leonard Saltz,  Stephen Clarke,  Eduardo Díaz-Rubio … (2008)
To evaluate the efficacy and safety of bevacizumab when added to first-line oxaliplatin-based chemotherapy (either capecitabine plus oxaliplatin [XELOX] or fluorouracil/folinic acid plus oxaliplatin [FOLFOX-4]) in patients with metastatic colorectal cancer (MCRC). Patients with MCRC were randomly assigned, in a 2 x 2 factorial design, to XELOX versus FOLFOX-4, and then to bevacizumab versus placebo. The primary end point was progression-free survival (PFS). A total of 1,401 patients were randomly assigned in this 2 x 2 analysis. Median progression-free survival (PFS) was 9.4 months in the bevacizumab group and 8.0 months in the placebo group (hazard ratio [HR], 0.83; 97.5% CI, 0.72 to 0.95; P = .0023). Median overall survival was 21.3 months in the bevacizumab group and 19.9 months in the placebo group (HR, 0.89; 97.5% CI, 0.76 to 1.03; P = .077). Response rates were similar in both arms. Analysis of treatment withdrawals showed that, despite protocol allowance of treatment continuation until disease progression, only 29% and 47% of bevacizumab and placebo recipients, respectively, were treated until progression. The toxicity profile of bevacizumab was consistent with that documented in previous trials. The addition of bevacizumab to oxaliplatin-based chemotherapy significantly improved PFS in this first-line trial in patients with MCRC. Overall survival differences did not reach statistical significance, and response rate was not improved by the addition of bevacizumab. Treatment continuation until disease progression may be necessary in order to optimize the contribution of bevacizumab to therapy.

Role of the vascular endothelial growth factor pathway in tumor growth and angiogenesis.

James Ellis,  D Hicklin (2005)
New blood vessel formation (angiogenesis) is a fundamental event in the process of tumor growth and metastatic dissemination. Hence, the molecular basis of tumor angiogenesis has been of keen interest in the field of cancer research. The vascular endothelial growth factor (VEGF) pathway is well established as one of the key regulators of this process. The VEGF/VEGF-receptor axis is composed of multiple ligands and receptors with overlapping and distinct ligand-receptor binding specificities, cell-type expression, and function. Activation of the VEGF-receptor pathway triggers a network of signaling processes that promote endothelial cell growth, migration, and survival from pre-existing vasculature. In addition, VEGF mediates vessel permeability, and has been associated with malignant effusions. More recently, an important role for VEGF has emerged in mobilization of endothelial progenitor cells from the bone marrow to distant sites of neovascularization. The well-established role of VEGF in promoting tumor angiogenesis and the pathogenesis of human cancers has led to the rational design and development of agents that selectively target this pathway. Studies with various anti-VEGF/VEGF-receptor therapies have shown that these agents can potently inhibit angiogenesis and tumor growth in preclinical models. Recently, an anti-VEGF antibody (bevacizumab), when used in combination with chemotherapy, was shown to significantly improve survival and response rates in patients with metastatic colorectal cancer and thus, validate VEGF pathway inhibitors as an important new treatment modality in cancer therapy.

Accelerated metastasis after short-term treatment with a potent inhibitor of tumor angiogenesis.